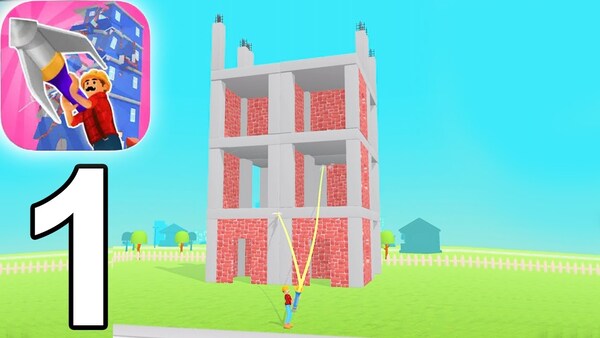 Pull It Down is a very simple arcade game from the Rollic Games studio. Here you need almost only one action. You will see a statue on a pedestal in front of you on each level. Your task is to topple it and destroy it. To do this, there is a rope with a hook in the hands of the protagonist. Throw the rope at the statue, hook on it and pull it sharply towards you. If you do everything right, the statue will collapse and you will go to the next level. This is where the gameplay ends. In the process, you have travel to different countries. There is also the opportunity to use skins and upgrade the hero. If you love arcade games, then download Jackal Retro and Dancing Cars: Rhythm Racing.

Read our review for the full picture. 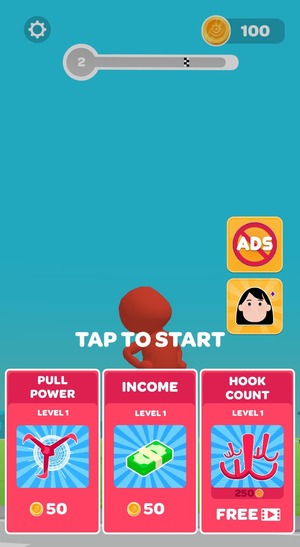 Pull It Down begins with the fact that the user finds himself in one of the countries of the world, where he can destroy the ball, which stands on a pedestal. It is very simple to do this. You just need to throw a hook on a rope at a stone. Next, pull the rope towards you, after which the sculpture will fall and, most likely, fall apart.

Then you move on to the next level. The nuance is that each time the hero travels around the world map and visits one of the countries. Sculptures to some extent correspond to the country where it is located. It is necessary to visit almost all continents and in the vast majority of states. You may not pass the level – if you do not have enough strength, and the sculpture will stand. Pump the hero to prevent this from happening. More on this later.

Like many similar simple games, Pull It Down has some sort of leveling system. For money, you can improve three parameters. This is actually income – you receive more money for completing the level. Strength Boost – Pull the hook with more force, allowing you to knock down even the largest statues. Finally – an increase in the number of hooks. 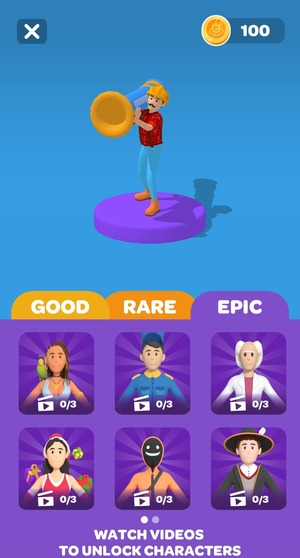 One is good, but when there are more of them, it becomes easier to complete any task. All improvements require money. Earn them at the end of levels by choosing a reward. However, you have to watch commercials for this.

To make your hero more fun and interesting, the developers have implemented many different skins into the game. Initially, you play as a simple character who is unremarkable. However, later there is an opportunity to unlock a large number of funny characters.

All of them are divided here into three types – common, rare and epic. To open a new appearance, you just need to pass the levels. Don’t want to wait? Buy them with money.

Pull It Down gets mostly positive reviews from users, but almost everyone complains about many ads. To fix this, we recommend you to download a mod that removes all videos. In addition, you will be able to receive things without viewing ads in this version. Such an approach can significantly save your time. 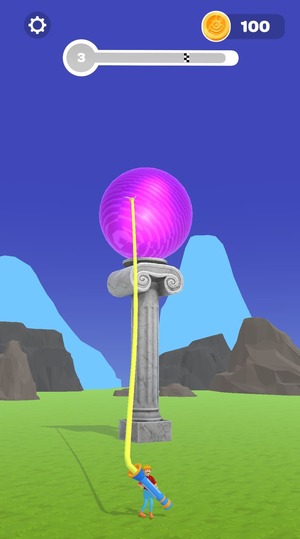 Pull It Down invites you to lift the veil of the complex and demanding work of a sculptor. Here you will not meet all sorts of plot twists and turns. All your attention will be riveted to the amazing gameplay. Enjoy all sorts of orders that involve the destruction of works of art in all corners of the globe. Don’t worry, it’s just a game.

Get orders of varying difficulty, as some levels require you to be very strong. No, here you don’t need to deal with complex gameplay, but you still have to follow certain standards. It is worth noting that your work requires evaluation, so it makes sense to try. Don’t forget about making money.

Pull It Down is one of those games that doesn’t require much from the user. Just destroy the statues, upgrade your character and go through level after level.