PunBall is a fun game from the developers of Archero. Once the great Zeus created life on this planet, which gradually turned into a civilization with magical abilities, but quickly got bored and moved away from his brainchild, leaving it to its fate. Then ominous Shadow appeared, an enemy who wants to destroy and enslave the population, plunging the continents into chaos and violence. After the first crushing blow, only one sorcerer remained alive. She is a fearless girl, dispelling the darkness with the light escaping from the magic staff. A brave hero stood up to protect the weak, using spells and unique abilities to defeat a terrible enemy. More than 100 combinations of skills such as bombs, freezes, fireballs and much more from a huge arsenal can help to cope and destroy numerous opponents using the ricochet method. Aim your magic staff at the target and start releasing a deadly chain of shells that smash enemy armies to smithereens. We also recommend checking out Dream Piano and My Little Universe.

The game has over a hundred thousand downloads within a few days after its release. The popularity of the project continues to grow.

Multiple genres in one game

The first thing worth noting about PunBall is the variety of genres. Here you have a roguelike, role-playing game and block breaker. Go through the levels repeatedly, enjoy changing content, but the essence will remain the same. The main task of the user is to destroy enemies with balls using the correct trajectory. Enemies will advance in waves and move one square towards you for each turn. If you do not have time to destroy them, then they will begin to inflict damage on you. The role-playing component of the game comes down to the character leveling system. Every few minutes and after the battle, you can improve the character. Well, the block breaker is to break the blocks, which are presented here in the form of evil enemies.

In order to be able to kill enemies more effectively, the developers of PunBall have provided many improvements. They mostly concern your balls. The player gets a choice of three possible boosts, but you only need to choose one. Use a ball of fire that burns everything in its path, a ball of lightning or a ball of a black hole. The latter simply absorbs the enemy, removing him from the board.

In addition, the player also has passive stats. Here we are talking about the attack and the amount of vitality. The more lives you have, the better and the longer you can hold out. Pump these skills between battles. Each of them requires a large amount of in-game currency. In total, there are more than a hundred such skills, and you can easily combine them combined!

Over a thousand levels

When the user launches PunBall for the first time, he will see several locations. Initially, only Hot Desert is available – there you can reach the maximum level 40. Also at your disposal are Dirty Desert, Evil Desert and Danger Desert. Over time, new worlds become unlocked. By the way, you will not be able to go to the next location until you have passed the previous one. The hero increases the level when he destroys one wave of monsters. Therefore, it is necessary to surpass everyone 40 times for the complete passage of the world. For this, you will receive loot boxes with coins, crystals or energy. By the way, you need energy to participate in the game. If you have too little of it, you will have to wait. Alternatively, it is possible to buy it. 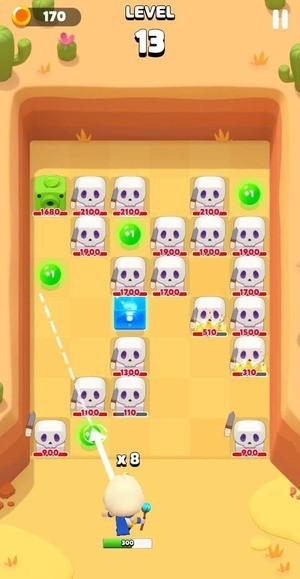 The application features top view, while all the character’s skills look very nice. As for the sound, it is quite good, although not impressive.

We bring to your attention a mod that will allow you to receive free rewards without viewing ads.

Some games try to take users with their storyline, while others focus on gameplay. In the case of PunBall, we have concentrated gameplay without hints of deep plot details. In this case, the mechanics should be really interesting and varied – but they are!

The essence of the game is simple: the hero defends himself, destroys opponents, finds new skills and tries to survive as long as possible. However, this is not always easy. Even the presence of a huge arsenal may not save you from pressing crowds if you do not act competently and prudently. After all, the lives in the game themselves are not restored – it will be a real shock for many! 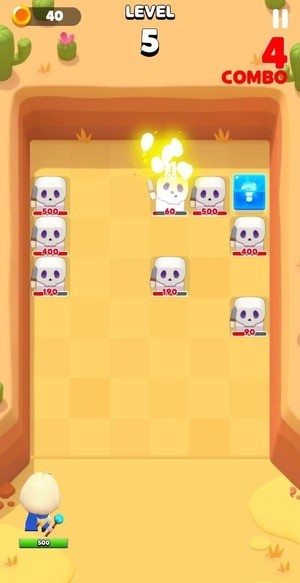 In view of this, playing PunBall can be quite difficult. There are many enemies, they attack sharply and in different ways – you have to adapt and learn. Shooting balls just in a straight line will not work – lives end extremely quickly. Therefore, you have to use competent combinations and learn to apply them in practice.

PunBall is a fun game with a unique concept that will surely find connoisseurs among the vast gaming community.