Punch Guys – you have to take part in the training process, practicing punches on a pear, as well as several fights against virtual opponents in this fighting game. Initially, you have a simple boxer. You will improve his characteristics – endurance and strength, practicing punches on a pear. When you think that your character is ready, you can try it out in a duel against some opponent. The principle is the same in battles with opponents – hit, hit, hit. Only here you still need to dodge enemy attacks, well, or defend yourself with a block. By winning fights, you will earn in-game currency. You need it to buy new gloves and skins for your character. If you like games about sports, then download Descenders and Stick Cricket Live.

Punch Guys is a fun arcade game for all boxing fans and not only. 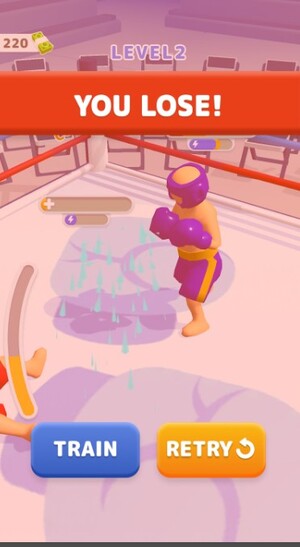 Before entering into a confrontation with an opponent, you will need to undergo training. Get an idea about the basic principles and features of the local gameplay. Act as a coach and mentor to the ward. You should work well with the punching bag during training to work out the necessary punches.

During the training phase, you will be able to get acquainted with all the basic mechanics of the fight. For example, receiving a jab, hook, uppercut, how to dodge opponent’s blows and counterattack, entering the clinch and how to get up after falling in the ring. You should not expect much realism from this game, as the stake here is rather on fun.

Once the Punch Guys training is over, it is time for the real fight. Combine game strikes and achieve maximum damage to knock down your opponent, or better, knock him out. Playable opponents are the most diverse in appearance, and some of them are especially bizarre to make you smile.

However, don’t be fooled by their looks! The more comical the opponent looks, the more dangerous he can be. In battle, you have two indicators – endurance and vitality. Use your stamina wisely to inflict maximum damage on your opponent. Keep track of your life. If you run out of them, you lose. 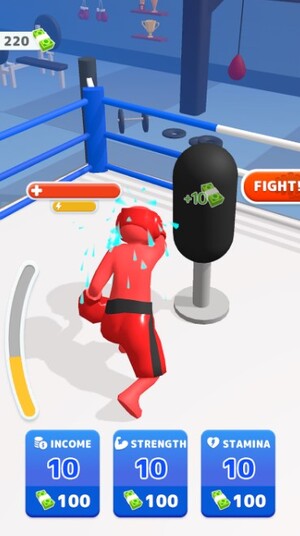 Punch Guys has several options available for leveling. First, it is an indicator of income. The higher the income, the more you will earn for the same actions. You can also improve the strength and endurance of the hero. Everything is simple with this.

Strength increases the impact force accordingly, that is, you deal more damage to your opponent. Well, endurance allows you to hold out in the ring for a longer amount of time. The more you pump, the less problems you will have in a real battle. All improvements require in-game currency. 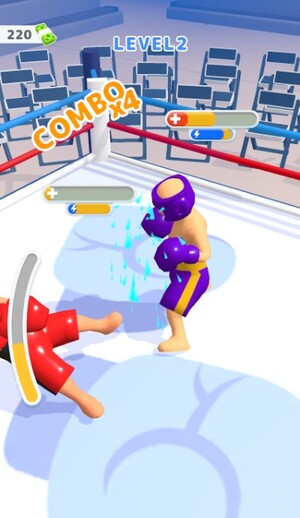 The games are top notch. Colorful design, nice graphics, funny and interesting animation with detailed drawings. Additional game effects of hits have good tracing, so you can see the nature of the damage and the place of the hit, such as a bruise or broken teeth.

After passing several game stages, you have to get to a special bonus level. There will be no enemy in the usual sense. Instead, you may see a punching bag. It will not answer you with blows, but you need to win in a certain number of game moves in order to get the victory. Main point is to get the maximum number of game coins at this stage. You can also get a smaller prize if you lose, so the player will be able to receive a modest reward in any case.

Punch Guys is a great option if you love fighting. You will not find realistic graphics and physics here, but the game fulfills its functions completely as a time killer.