Puzzle and Doomsday is a mobile RPG with real-time strategy elements. The game combines elements of construction. Player is required to create infrastructure and production halls. In addition, enjoy roguelike and match-3 puzzles. For example, a normal battle within the framework of the project takes place on a field with multi-colored elements, as in any puzzle from the category indicated above. In order to inflict damage on an opponent, you need to collect three or more elements of the same color. Certain stones correspond to each character, which allows you to build battle tactics. The essence of the game as a whole is to collect characters, develop them, select different types of units, explore the world and complete tasks. We also advise you to pay attention to the Ball Sort Puzzle and Water Connect Puzzle.

Puzzle and Doomsday is a new match 3 game where this casual mechanic allowed creating of interesting battles against enemies.

Puzzle and Doomsday is a cross-genre project, since the gameplay of this application combines several categories of games at once. During the passage, you will be engaged in construction, research, search for artifacts and pumping heroes, and fight. The battles in the application deserve a special mention, since they are a key feature of the project. The battles in this game take place systematically, but instead of hitting the enemy directly, you will pick up elements in combination, causing damage. For example, if one of your heroes has a strong attack, and he is marked in red, then it is better to collect these particular stones. Make a combination of 3 or more elements in order to strike the enemy.

Now you can build an entire settlement! There are two types of resources in the game: food and metal. You can develop your camp with their help. Do it in a typical way for mobile strategies. We have a main building – a town hall or a base. It affects the list of possible buildings and their improvements. The higher the level of the base, the more opportunities open up.

The question arises: why should we do all this at all, because the main gameplay is completely different? Through the settlement, the authors implemented the mechanics of summoning new units and strengthening them. You need resources to upgrade your character – food, which you receive with the help of the settlement. To do this, you need to build an appropriate building and regularly collect resources from it.

Hire the best heroes in the tavern

The authors added a plot to the game. We have a team of good people fighting bloodthirsty zombies. At the head of the army is a terrible boss – the battle with him begins training. The squad moves back to save up strength and attack again. To do this, they select a place for the base and begin the process of equipping it – a remote island. This is how our gameplay begins. We get several new characters already in the first minutes, each of whom knows something different. Someone shoots at random, someone sets fire to enemies and someone heals the team. An important skill is the destruction of the opponent’s armor – this can help to end the boss fight much faster. Each hero has his own biography and secret. As you progress, you can get to know him better. It is also worth using development potions – they give additional opportunities for the characters.

Bright graphics and beautiful special effects of Puzzle and Doomsday will delight users. In addition, there is driving music that will not let you get bored.

We suggest you download a Puzzle and Doomsday mod, which allows you to adjust the attack and defense indicators of your heroes. In addition, we removed all ads from the application.

Among other things, the developers of Puzzle and Doomsday have added a storyline. We learn the standard details: zombies, danger, people, tea, and so on. It is not very important to delve into the plot, and hardly anyone will do it. However, the authors’ approach to the game looks serious – they even added a few slides to illustrate the plot intro. Get the role of a commander – an experienced warrior who rescues people in a zombie apocalypse. 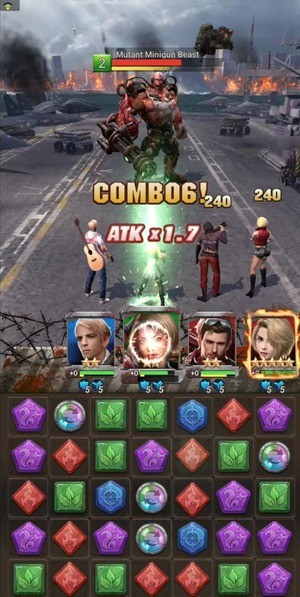 If you have never played a game like this, we will describe its essence. We have a playing field – a set of blocks, among which we need to find rows with blocks of the same color. Each row discarded in this way flies up and deals damage to enemies.

There is also a familiar scheme of what color to attack in Puzzle and Doomsday. Each of the opponents has its own characteristic in the form of a color. In the corner of the screen, you can find a hint of what color blocks affect which enemies are stronger. Thus, consider colors when attacking. However, that is not all. If you drop more than three stones, you will receive additional bonuses – grenades of different colors. They have various effects and allow you to inflict gigantic damage on enemies.

The members of Puzzle and Doomsday squad also play a significant role. Destroying stones of a certain color, you fill scale of the super blow. When it is full, you can use the skill. Someone restores health points to allies, someone shoots at enemies from a machine gun, while others launch rockets and throw powerful grenades. The use of skills can seriously affect the course of the battle. If your characters lose all lives during enemy attacks, you will lose!

Puzzle and Doomsday is an interesting and entertaining toy in which gameplay is carried out in real time. The project belongs to the category of role-playing applications, but combines several types of genres at once.