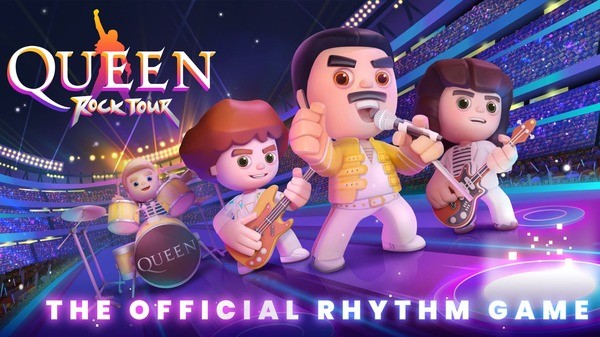 Queen: Rock Tour – The Official Rhythm is a musical game released with official support of Queen. The game release is timed to coincide with significant event in history of the group. 50 years have passed since the moment when John Deacon joined the group and formed classic Queen line-up. Rhythm app provides players with opportunity to experience greatness of band’s live performance on Android smartphones. Through working with group’s official archives and consulting with experts, game has been able to pay attention to the smallest details to make the gaming experience as authentic as possible. Reveal your musical talents and enter virtual stage to play guitar riffs, drum solos and much more. By the way, if you are interested in musical projects, then download also Beat Jumper: EDM up! and Piano Fire – EDM Music & New Rhythm.

This game will appeal to both Queen fans and people far from rock music. Read more below.

Control the game of all four party members

Your main task in Queen: Rock Tour – The Official Rhythm is to press the right buttons in time to make great music. Become responsible for all four members of the band – Freddie Mercury, Brian May, Roger Taylor and John Deacon. Each of them is marked with a different color. Therefore, when vocal part of Freddie is in the song, you need to have time to perform necessary actions. Otherwise, his voice can subside and concert audience will not like it. The same applies to other musicians. For example, when May’s solo starts, you need to be in charge of his guitar. Playing as Taylor, you need to press the buttons very quickly, simulating the drumming.

Since the game is fully official, there are over 20 quartet songs on Queen: Rock Tour – The Official Rhythm. Here are some of the band’s most famous and beloved songs, including Bohemian Rhapsody, We Are the Champions, We Will Rock You, Killer Queen and more. However, sound quality of the songs depends only on you, because if you do not press necessary button in time, track will lose one of the performers. It is possible to play each song at beginner or professional level. Depending on your choice, you can select movement speed of circles and lines, as well as frequency of its appearance.

Go through the entire band history

As we know, Queen toured until 1986, after which the band stopped performing live due to Freddie Mercury’s illness. Queen: Rock Tour – The Official Rhythm invites you to go all the way of quartet, from the mid-70s, when the band was still unknown, to Wembley gigs in 1986. Game has several sections, each of which symbolizes one of Queen’s albums. First, you only need to play two songs, but later this number will increase. It is a little offensive that last group songs, written after 1986, were not included in this music project. Nevertheless, the list of tracks will delight all fans even without full collection.

By the way, developers of Queen: Rock Tour – The Official Rhythm decided to add another interesting detail to the game. Each group member can be dressed in a different outfit. There are several costume options for each of them and these costumes roughly correspond to real images of performers. You can choose a hairstyle for a musician, clothes, glasses, and gloves. Such an option cannot directly affect the gameplay, but still it brings some variety.

All of the musicians on Queen: Rock Tour – The Official Rhythm are cartoon models of actual band members. It is worth noting that over time, their appearance changes, similar to how musicians have changed in life. Everything is clear with the soundtrack – more than 20 Queen tracks are available for listening.

Queen: Rock Tour – The Official Rhythm is available from official sources, but it is paid. You can only complete training. If you want to play unlocked version, it is necessary to pay about four dollars. However, you can download unlocked version on our website and enjoy it completely free of charge. We also activated unlimited money option for you.

In order to play Queen: Rock Tour – The Official Rhythm mod you need to complete short tutorial. It is simple, you only need to play one song and familiarize yourself with basics of the project. Then you can enjoy full version with unlimited money. Spend endless resources on skins for heroes.

Note that the game also contains a library of videos with video cuts of band eras according to album you are playing. For example, after completing Jazz album, you can see snippets of photos and videos of band’s performances from those years.

All performances have a form of concerts. Greet a crowd of fans in hall and try to hit all the notes to make people even more enjoyable. After each song, you can get a silver, gold or platinum disc. These are analogs of three stars in other games. Platinum disc is the most difficult to obtain, but also the most valuable for the gamer.

During the concerts, you need to click on buttons that move along special lanes. Sometimes you need to swipe to right or left, sometimes – pinch screen or slide your finger along a zigzag. In general, app trains your reaction and gives you a lot of fun thanks to wonderful music and show that takes place on stage.

It is quite rare for Android to release such high-quality apps as Queen: Rock Tour – The Official Rhythm. Thanks to official support of band’s musicians, here you can enjoy your favorite songs of the quartet and even feel like you are at a live Queen performance. We recommend this project not even to fans of legendary group, but for everyone who loves music.

How to install Queen: Rock Tour – The Official Rhythm Mod?