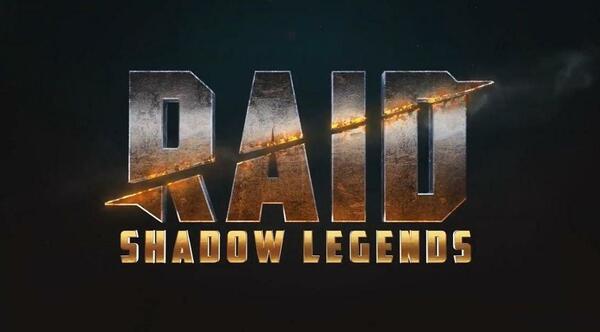 Raid: Shadow Legends is a party-based collectible online RPG game where players fight each other to collect squads of heroes. Now everyone plays Raid. According to unofficial data, the number of its audience for 2020 exceeded 10 million players. The game itself is quite young – the release took place on July 29, 2018.

Raid: Shadow Legends was developed and published by Plarium, whose products have always been famous for the depth of the gameplay, but this time the developers surpassed the wildest player’s expectations. If you are an MMORPG fan, we guarantee that you will forget about sleep for at least a week. Our detailed review will tell why this game is so interesting.

Despite millions of active players, Raid: Shadow Legends is growing its fan base every day. Let’s look at what game secret is.

The first mode the player will get to know is the campaign. The campaign consists of 12 locations, each of which has 7 chapters. There is always a strong boss at the end of the 7th chapter. As you progress through the campaign chapters, you receive items of equipment, silver (main currency), rare heroes and summoning shards.

The next mode is dungeons. There are 10 of them in total. The first five of them you can use to find potions used to develop heroes: potions of magic, spirit, strength, darkness and arcana. In each dungeon, the player can face with a boss with its own unique characteristics. Going through everything with one squad definitely won’t work.

In PVP Arena, you can fight other players in 4v4 format and earn valuable prizes. The effectiveness of your team depends only on your ingenuity and right combination of skills.

By joining a clan, you can discover the fourth mode: clan boss battle. There are several bosses, but they differ in strength and rewards. Deal a certain amount of damage to get a chest with a prize. If  clan manages to kill the boss in a day, the reward doubles.

The final mode of Raid: Shadow Legends is Faction Wars. It is suitable only for high-level players, since only heroes of a certain faction can participate in each battle. Completing faction battles brings special glyphs (1-6 stars) to enhance additional parameters of equipment items.

Chat with other players

It’s also nice that in Raid: Shadow Legends you can always talk in a chat. Players will be happy to help you solve any question and tell you which hero is better and what to wear. Just click on the chat icon at the top of the screen and switch to the first channel, which has the most players. Here, around the clock, someone jokes, and someone argues about heroes and pumping. You definitely won’t get bored.

Raid: Shadow Legends has one more element that significantly affects the hero characteristics – artifacts he wears: weapons, shield, helmet, gloves, armor and boots. Heroes of rank 4 or higher, only if item is suitable for the faction, can also wear rings, necklaces and flags.

Artifacts have the same quality gradations as heroes, which affects additional stats. Players can upgrade all artifacts up to level 16, significantly increasing the characteristics. The higher the level of enhancement, the lower the chance of success, so high-level artifacts consume huge amounts of in-game currency, often without much success.

All artifacts are included in sets with 2 or 4 items, which gives additional benefits – for example, an additional attack or health restoration depending on the damage dealt. A properly selected set makes the hero much stronger, including Arena or clan battles.

In total, there are more than 400 heroes in Raid: Shadow Legends divided into as many as 16 factions: High Elves, Dark Elves, Dwarves, Undead, Barbarians, Apostates, Orcs and others.

The heroes have segmentation on five rarity classes: common, uncommon, rare, epic and legendary. The chances of getting legendary heroes are rather low, so their name justifies itself. However, you will have many rare and epic heroes – you don’t even need to worry about it.

It is important to note here that a hero’s rarity does not reflect his usefulness in combat. Any experienced player can confirm that among the rare and uncommon, there are simply irreplaceable characters, and among the epic and legendary, at the same time, there are frankly trash heroes.

The graphics in Raid: Shadow Legends are very high quality and colorful. The developers worked out all heroes are in such detail that it’s even nice to just look at them in the menu. Orcs, undead, hellhounds, elven archers and harsh mountain people with axes – there are hundreds of them. The graphics appeal to the instincts of the players, mainly the male part of them: all the female characters here wear high heels. Bloody female orcs look sexy despite green skin while heroines of undead faction are attractive girls, not half-decayed corpses.

As for the soundtrack, the game also boasts a cool soundtrack and high-quality voice acting of the characters. All game sounds are almost indistinguishable from real ones. In total, the visual and graphic part of the game has such a high level that it can serve as an example for many other similar projects.

We should also mention the game optimization, since despite the abundance of special effects, high-quality rendering of heroes and the world around you, your Android device won’t heat up or freeze even at the highest graphics settings.

Raid: Shadow Legends, like any game of this genre, has some restrictions, forcing players to either buy upgrades for real money, or watch dozens of annoying advertisements to replenish different indicators, whether it is stamina points or in-game currency. In some cases, you need to go through the same level many times in order to collect the required number of coins and rubies to unlock a new hero or skill, and this is not always fun.

Despite the fact that the game offers to set the passage to automatic mode so that your heroes fight opponents without your intervention and to speed up the walkthrough twice – this is not always convenient and can quickly get bored. That’s why we bring to your attention a mod for increasing the battle speed, where instead of the usual double increase, you can speed up the parameter by 15 times. 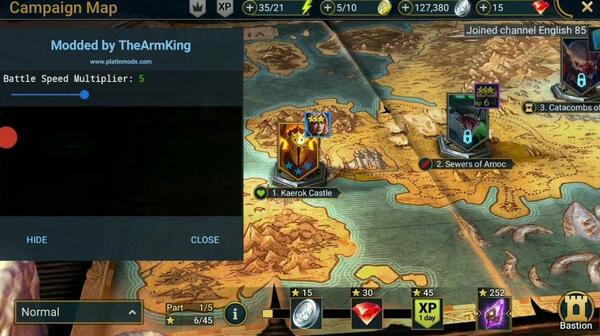 Just download and install a modified version of the game and after launching (game requires 625 Mb of cache), click on the special button in the upper left corner. After clicking, a special menu appear where you can set the speed of the battle in the game at your discretion. By default, the parameter is set to 1, however with the help of the slider you can adjust it however you want.

We have personally tested the game and made sure that the mod works properly. Everything works flawlessly with no sagging between levels. Now let’s share our impressions of the game itself.

The whole point of Raid: Shadow Legends is to upgrade your team of heroes. At the beginning of the game, several more heroes will join you free, and you will have to upgrade them by passing game missions, look for equipment for them. If you want to play in the PVP arena or kill especially dangerous monsters in the dungeons for the best trophies, then you have to invest in your team to the fullest.

Here you have to spend stamina points (replenished over time) to cope with more difficult opponents. Control your heroes manually and trust the auto control functions in the battle.

At the very beginning, only story missions are available, and it is necessary to complete them as often as possible – until the average level of your heroes exceeds 10. Then you can continue playing other modes, as after the 10th level you will definitely be able to cope with the final bosses in the dungeons. The boss fights here are quite difficult, dying, losing loot and wasting stamina is easy here.

It is very important for a beginner not to spend rubies at the very beginning of the game. Buy a mine and improve it to third level instead. It costs 150 rubies. After that, the mine will start bringing in 15 rubies every day and pay for itself in 10 days. If you are a player without donation, this is mandatory step on path to success in Raid: Shadow Legends.

Should you play Raid: Shadow Legends? YES. The novelty effect from most modern games quickly wears off, but in this case, it’s present throughout the entire gameplay. You can constantly improve your heroes, try new combinations and equipment sets or experiment with talents and team compositions. Launch this game for 1 minute and we promise: in the next 10 hours, even an atomic war won’t be able to distract you as well as in Genshin Impact.

Don’t forget to delete the original version of Raid: Shadow Legends before installing our modified version to prevent errors during installation process.