Rainbow Monsters: Card Battle is a strategy game from ABI Global LTD. The essence of the game is as follows: you need to pump your army with the available boosters and send it into battle. That is all in general. Boosters here are in the form of cards. Use them before the start of the battle. The cards are completely different, as there are also transformations into other monsters. Increase in the number of your units by three times and just their slight strengthening. The cards are randomly drawn and you need to use them wisely to complete the level. This is not as simple as it might seem at first glance. If you are interested in strategies, you can also download Grand War: Army Strategy Games and Train Clicker.

Rainbow Monsters: Card Battle is an interesting strategy game that hundreds of thousands of people has already tested. An average score of 4.5 indicates a high quality of this game. 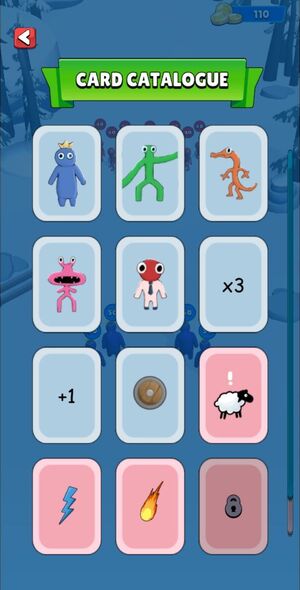 Equip an army of rainbow monsters

The main task in Rainbow Monsters: Card Battle is to strengthen and equip your army. The whole game consists of levels. You have to improve your army before the start of each of them. Some cards improve your mobs, making them out of regular royals. Others multiply the number of units by a certain number.

Still others – turn them into other funny creatures or even allow you to use magic: a fireball, lightning, and so on. The battle will start only after you use all the cards. A bunch of ordinary stickmen will confront you, but they are stronger than they seem. Often you can lose, in which case you have to start all over again.

Think of the right strategy

Another feature of Rainbow Monsters: Card Battle is the ability to use cards in a different order. This can be very important. For example, there is a booster for an increase of +1 unit and multiplying units by 3. To end up with more fighters, you first need to add one, and only then increase them by 3 times.

Turn your monsters into fancy trees and then upgrade them once again to make them even stronger. When everything is ready, send units into battle and fight against a crowd of enemies. You will not be able to influence the battle itself in any way. Make all preparations in advance.

In addition to the standard cards that you will get before the start of each battle, you can globally improve army. Without this, you will not be able to complete the levels. There are two global parameters – strengthening the troops, as well as increasing your earnings. With the money you earn, you can carry out improvements, which here relate to the size of the initial squad and the income you receive.

Pumping the first parameter will help you quickly recruit the number of fighters. The second parameter affects the amount of in-game currency credited for completing the stages. In the process of passing, you will also fill in the scale of prizes. Skins are the prizes here. You can increase the speed of filling this scale if you refer to advertising. Ads can also multiply your income if you agree to view them after each individual level.

Rainbow Monsters: Card Battle has a huge amount of advertising that appears with and without it. To fix this, we recommend downloading a mod APK that will allow you to receive items and bonuses without watching videos.

Rainbow Monsters: Card Battle isn’t going to surprise you with its storyline. From the very first seconds, you will be waiting for the passage of dozens of unique levels, which differ markedly from each other in both content and complexity. As already mentioned, here you will need to refer to the bonuses located at the levels. No matter how hard you try, but initially your army is very weak.

Therefore, you need to turn to various boosters. Pumping will help you pass levels that will become more and more difficult each time. Skins diversify the appearance of the project, which is also a noticeable advantage.

Rainbow Monsters: Card Battle is a simple, but no less interesting game. If you have always been interested in massive battles, where several people fight each other, then this application is perfect for you.