Random Card Defense is a game where players have to defend tower by means of game cards that act as a kind of spells. Cards have its own level and strength. In addition, you can enhance the effect by connecting two identical cards. However, what happens in the end may come as a surprise, as due to mixing you can get a random card. It is simply one level higher if compared to its predecessors. In general, the cards fall out randomly and it is almost impossible to predict the battle outcome. Therefore, the player needs to develop his own tactics, which takes into account strengths and weaknesses of game hero and his tower. For fans of this genre, we recommend you to familiarize with Rush Royale – Tower Defense. Moreover, fans of card games will surely love Legends of Runeterra.

CookApps studio developed the Random Card Defense in fall of 2020. Over 50 thousand users from all over the world downloaded the game in a few months. The game is quite highly rated – its rating is 4.4 points.

Users who first downloaded Random Card Defense claimed that the game resembles other similar games, but that is not true. The creators made sure that the game was a striking representative of its genre, but had distinctive features. Therefore, the main genre is strategy, but it has a lot from card and board games, as well as tower defense! As a result, a very eventful thing has turned out and it can seriously captivate. 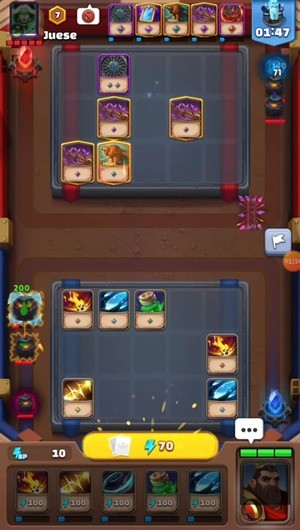 A distinctive feature of Random Card Defense is that the gamer has to confront a living opponent, another player who claims the tower and territory. We have to mention that there can be no more than five such clashes a day. However, if the blood boils and requires the continuation of battles, you can complete a small task and gain access to another fight. Having reached a certain level in the game, you can enter into an alliance. Within it you can not only communicate, but also exchange cards, which can help a lot in achieving better results.

For victories and completing tasks in the game, you get rewards in form of chests containing both necessary things and rare cards. Store all your belongings until the moment you use or exchange them. In-game items help to improve the characteristics of hero and towers.

Random Card Defense is a modern app developed well in terms of graphics. It is worth noting the excellent detailing of both the gameplay itself and all menu items, including the hero controlled by the player. The cards that take almost the main part in the game look especially bright and attractive. The graphics really deserve praise. In addition, it doesn’t overload the device’s GPU. The sound design of the game is not outstanding, but it serves as a great addition to the process.

The presented version of Random Card Defense is equipped with a mod that disables viewing of ads and opens access to the necessary things free. It allows you to advance significantly faster in the game and achieve greater results faster.

Based on the test results for Random Card Defense, we confirm the mod functionality. With its help, you can purchase items necessary for the defense of your towers free without viewing ads. Now everything you need to upgrade your base is much easier to get. Moreover, you can get used to new artifacts difficult to access in the regular version. We also checked the game for malwares, so you can safely install the game and don’t worry about the safety of your gadget.

Random Card Defense allows the player to feel like the lord of not one tower, but a whole cluster of separate territories that you gradually open during the walkthrough. Just win constantly to conquer new lands. In addition, it is necessary to defend already conquered and protected lands from attacks of various caliber monsters. All these game actions require from the player not only abilities, but also huge resources. The developers provide the player with the opportunity to master the necessary things and maps. However, for some items you have to watch ads, which not only knocks off the fighting spirit, but also seriously annoys. 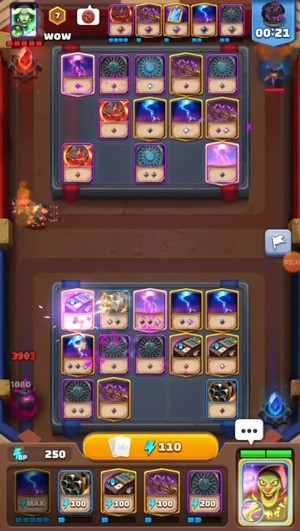 The gameplay is quite intuitive. Everything is simple and it makes the game easy to control and even more addictive. To make the player’s life even easier, Random Card Defense has game tips made in a nice looking style.

Random Card Defense is a addictive game! It is dynamic and addictive opportunity not only to compete with players from all over the world, showing remarkable strategic abilities, but also to try own luck, in attempt to become the supreme magician!

Don’t forget to delete the original version of Random Card Defense before installing our modified version to prevent errors during installation process.