Random Dice: PvP Defense by 111% studio is a mobile tower defense project developed for Android mobile devices. It invites you to try your hand at defending the base, using tower cubes with different abilities and capabilities instead of units. Your task is to plan your defenses effectively and minimize the risk of failure in face of ever-increasing complexity. The game uses a specific graphical shell that makes it visually perfect, although it cannot boast of high-quality animation and effects. Overall gameplay comes down to very simple mechanics, but quickly addicting. This app can definitely appeal to lovers of systematic and unhurried gameplay. Moreover, there is special training mode for beginners. By the way, if you love tower defense games, check out Arknights and Castle Crush.

Read on to find out about the main project features.

Randomness can decide the match outcome

Random Dice: PvP Defense focuses on immersing you in an intuitive and fun competitive experience. In order to achieve the goal, you don’t need to use learned tactics, but constantly adapt to random events. The essence of local gameplay is to destroy waves of enemies, using cubes with different characteristics and effects. Place cubes on the field correctly and improve them in every possible way. Several game modes won’t let you bored, as each of them differs in a set of rules. However, the general principle remains the same. 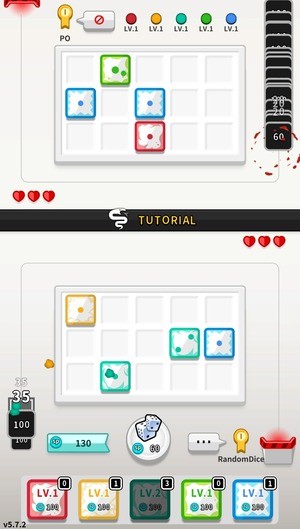 Cubes with different characteristics and effects play the main role in Random Dice: PvP Defense. Here, as in any collectible card game, you collect decks, which can contain up to five different dices. As part of the gameplay, you place a random dice on the field that becomes one of the cubes included in your set. During the game, you can improve your units in a variety of ways. You can combine cubes with the same numbers to get a stronger version. As you can guess, the resulting cube determines randomly. At the bottom of the screen, you can also see your set of dices, which you can instantly improve.

There are several game modes in Random Dice: PvP Defense. Recommended mode for beginners is classic PvP, where you have to compete with another player in the skill of destroying waves of enemies. The player who is the first to miss three enemies will lose. Project also features cooperative mode. It implies that two players will work together to destroy the common waves of powerful enemies. Here you can define your role. For example, your partner can put dice that deal damage on the field. In turn, you can support him by placing cubes with auras and passive effects. 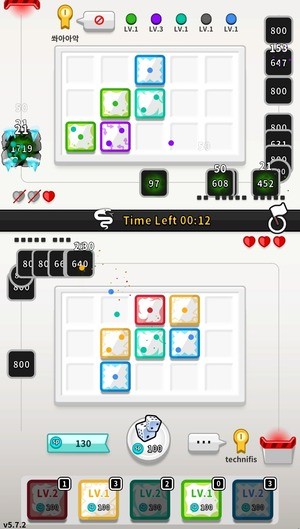 Rounding out the list is a hardcore mode – arena. Within it, you need to play a number of games. Reward depends on the number of games won. The main limitation of this mode is three losses, after which you need to buy a pass to the arena again. For successful performances in all of the above modes, you receive regular and donated currencies, rating points, experience and special chests with dice cards. If you get a new card, then appropriate type of cube appears in your inventory.

Visual design of the game may remind you a board game drawn on a piece of paper. Behind the modest graphics and minimalistic animations lies a deep gameplay, where you have to make improvements every second to reach certain heights. Sound and various audio effects are present in Random Dice: PvP Defense, but do not play an important role.

We offer you to download mod for unlimited amount of money to play Random Dice: PvP Defense easily. Now, users have an opportunity to build up the power of cube army free.

Our testers have checked functionality of mod for unlimited money. Based on the verification results, we can confirm the correct operation of Random Dice: PvP Defense. However, since this game focuses on online battles, developers try to prevent foul play and constantly release new patches for their project. In this regard, the modified version may not work correctly in some updates. If you suddenly have any problems with getting an infinite amount of resources to your in-game account, then follow our updates. We will try to provide the most stable version of the game as soon as possible. 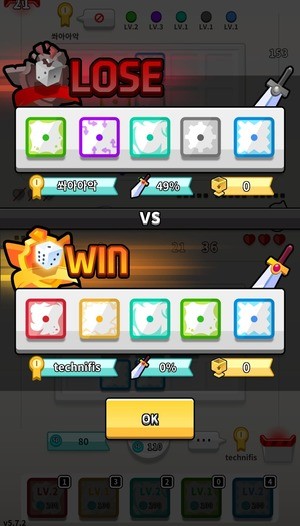 The gameplay of Random Dice: PvP Defense uses tower defense mechanics. Each of players gets a small field around which the enemies move. Towers in this game resemble regular cubes, but have additional features. They differ in colors, denoting a specific type of attack. Yellow damages several opponents at once, red deals additional damage with an explosion, blue freezes and green corrodes. You can combine cubes in order to increase its efficiency, but the color changes randomly.

In addition to the button for creating new towers, you can also improve existing ones by spending a resource called SP. It accumulates gradually, every few seconds. The key to winning Random Dice: PvP Defense lies in the correct management of available SP supply, as well as luck. Moreover, players can invest in-game resources to improve the cubes, which will remain in subsequent games. The game has a donation that directly affects the gameplay, but this won’t hurt your entertainment, since you can use our unlimited money feature.

Tower defense strategies give players the opportunity to speculate on tactical decisions, select sets of units and advance through the rating system. If you are interested in similar game mechanics, then download Random Dice: PvP Defense.