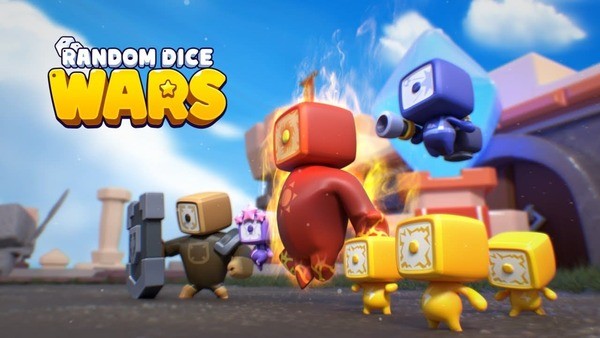 Step into the path of a warrior in Random Dice: Wars, a game with super-hitting combinations and tactical maneuvers to outwit your opponents on the battlefield. You will no longer be able to stop, so roll the dice, combine and improve them. Cast mind-blowing and deadly attacks during the battle, leaving behind only scorched earth and the corpses of enemies. Defend your fortress with all might, trying to destroy someone else’s, playing in several modes. Destroy enemy units alone or find a friend and arrange joint battles, tactically supporting your partner. Collect trophies from defeated ill-wishers and earn keys to open gift chests with valuable loot. Find special cubes, pump them up and use the full power of science and magic. Just tap with your finger to activate and send magic spells on the heads of enemies, knocking out lives from entire groups of units. Download also Idle Kingdom Defense. 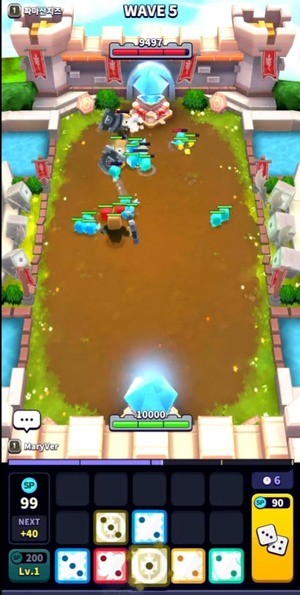 Random Dice: Wars has attracted hundreds of thousands of gamers, rate this project and you.

The actions of Random Dice: Wars take place on fields of 3×5 square cells. Orientation can be horizontal or vertical. Place colored cubes on the field. These active elements shoot, destroying, slowing down NPC mobs, black cubes. The latter move in a strip along three sides of the field.

The player’s goal is to prevent opponents from crossing the red finish line. The dice has the form of squares of different colors and designs, since the graphics in the project are 2D. Only one upper plane of the dice is visible. Combine game elements, pump or change their characteristics. If we talk about game modes, then you can have access to a 1v1 mode, as well as a 2v2 team battle. Play yourself against other users or team up with a friend!

Classes in Random Dice: Wars reflect the pumping of heroes. Find them next to the player’s nickname. They are visible in the match, in his profile and during the battle. Increase in rank is due to victories in PvP battles, getting trophies. The more victories and prizes, the sooner the level increases. In total, there are 20 classes in the game, each characterized by a certain set of awards. The first includes gamers with a rating of 0-299 trophies, the second 300-599 and the third – 600-999. Overall, the rise goes to the twentieth rank, which number of prizes exceeds 40 thousand.

Bonus skills are available in vertical, horizontal stripes. Let’s talk about some of the game elements, as there are more than 50 of them:

We suggest you download Random Dice: Wars mod for unlimited money. Please note that the mod may be unstable! If you have any problems with the application, do not forget to follow our updates.

Random Dice: Wars provides an interesting and unusual gameplay based on the placement of dice on the field. This is required in order to destroy the approaching crowds of enemies approaching from all sides. As mentioned earlier, cubes appear in random order after you press a special key. When the cube appears, you can connect them to each other to get an improved version.

An interesting feature is that the improved cube drops out randomly, which can greatly adjust the existing plans. It all depends on the deck assembled at the beginning of the fight. If you can collect a set of useful towers, then the random order will not affect the course of the game in any way. During the passage, you can start improving the towers using a special panel. Place cubes on the work surface using the earned currency for eliminating opponents.

If you consider yourself a real pro, you should try the arena. In order to get there, you need to buy a ticket and then win 12 victorious rounds. If you cannot win three times, then the streak will end and you will receive a reward. Get the maximum reward for all victories.

Random Dice: Wars is an addictive logic game for fans of unusual puzzles and strategies. Here you have to think over your actions several moves ahead.