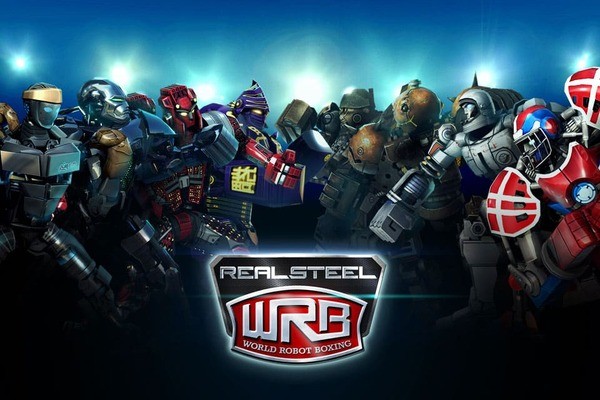 Real Steel World Robot Boxing is an action game for Android devices from Reliance Big Entertainment (UK) Private Limited, based on the movie of the same name by Sean Levy “Real Steel”. Control a robot and take part in battles with real people for the opportunity to become the champion of the World Robobox League. Moreover, if you are interested in the subject of robots, then check out Space Marshals 3. For fans of fighting in the ring, we recommend downloading WWE Mayhem.

Create your own fighting style with a variety of punches, tricks and uppercuts to win the title of robobox champion as soon as possible.

From hidden underground battles to the World Championship, Real Steel World Robot Boxing combines heroic storytelling with thrilling action. Assemble the best team of steel warriors and enter the square circle for the toughest robot battles. Equip your robots with crazy abilities and hone your skills with hours of training. Knock out your opponents with awesome signature moves and fight until you reach the top of the leaderboard. Compete for the title of the robot boxing world champion. 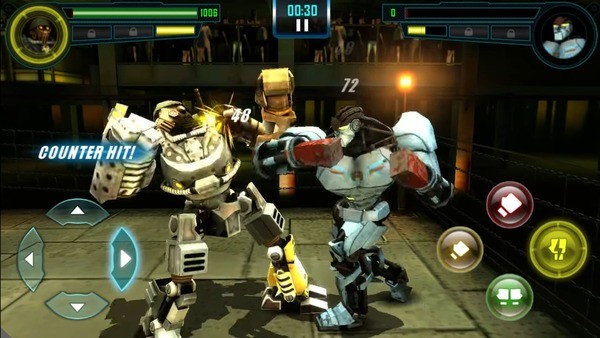 Play in Career, Multiplayer, and Winner Takes All to become the best in every mode of Real Steel World Robot Boxing. Call your friends for incredible fights, deliver the right combination of blows to create combos, and defeat them. Connect Wi-Fi to synchronize faster with other users. Win challenges and show off your achievements in a special trophy room. Study the rating of your opponents carefully and start small to fight opponents of your level and rise as high as possible.

The choice of robots in the game is very huge. Just imagine, 58 war machines, including robotic titans and such movie characters as Atom and Zeus. Weighing 1000 kilograms and 3 meters high, the robots won’t leave anyone indifferent. By participating in battles, you not only increase your rating, but also earn gold coins to improve your hero further. Make it much faster, more powerful, or simply repaint it in a different color that you like best. The better your war machine, the easier it is for you to outrun and win as many opponents as possible.

Real Steel World Robot Boxing developers did a great job on the controls, adding a joystick on the left side to move the boxer around the ring. On the right side, they placed all the necessary buttons for actions during the fight. Activate a combination of blows to harm the enemy. The more consecutive hits you land, the faster the function of multiple simultaneous hits – combo appears. If you win, you can play mini-game to create a fatality. 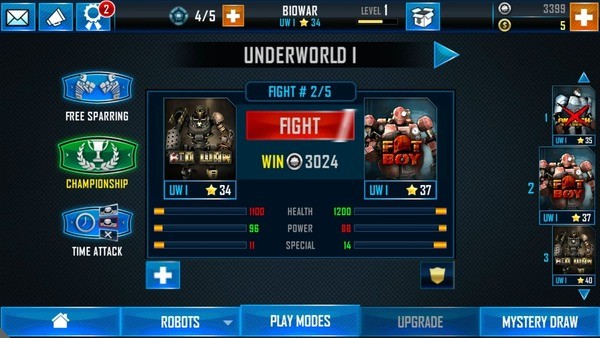 Travel through an exciting storyline and transform your warriors of steel into powerful champions, fighting in the story mode and global tournaments taking place in famous locations. Knock out rivals from around the world or play with friends to solve this problem finally in dynamic Versus battles and weekly live events. Who will get the final knockout? Explore dynamic quests and take part in dynamic battles. Diversify your squad, level up your mechanical monsters to improve their characteristics and unleash their full potential!

Real Steel World Robot Boxing is game with excellent realistic graphics, high-quality animation and special effects. In other words, diving into the world of robots has never been more accessible and fun. Throughout the game, you can hear a number of epic and groovy soundtracks that set you up for victory in battle.

Improve the attacks, armor and skills of your robots by winning battles in Real Steel World Robot Boxing. However, it should be borne in mind that each subsequent improvement becomes more expensive and requires more time to install. You can accelerate them only for premium currency or gold coins. Moreover, you can only obtain these currencies for real money, but a new unlimited money mod solves these problems. Download and become the best roboboxing player.

After installing the modified version of Real Steel World Robot Boxing, an unlimited amount of money appears on your game account. It can help you to improve your fighter and become a real champion. Don’t worry, the mod is completely safe for your device. The greatest battles in robot boxing history are in your hands! Unleash epic combos with powerful skills on your opponents to define your own fighting style in this epic RPG! Immerse yourself in the breathtaking gameplay when your steel warriors launch dynamic combos with a touch of your finger. Feel the real impact of steel with every blow and every blow. Destroy your opponents with intuitive combat interface controls and explosive special moves. Dive into the best arcade steel crushing battle.

Real Steel World Robot Boxing is a fighting game that deserves attention. Awaken your passion to become a champion and beat all your friends online. Fans of the movie will be especially pleased to play in this game, as there is excellent detail and graphics, which creates the feeling that you are exactly there. Unlimited money feature would be a good addition. Play and upgrade your robots as fast as possible.