Rebel Gears Drag Bike CSR Moto is an unusual drag racing game in which you can fine-tune how your bike behaves on the track. As you may know, drag racing is a type of racing in which cars move strictly in a straight line, trying to overtake an opponent and come to the finish line first. Interestingly, the developers are trying to recreate the unique feeling of speed experienced by the riders in such projects. Everything is the same here, only you will control a motorcycle instead of cars. Find many interesting modes that offer you both single and multiplayer gameplay. You can collect an impressive number of motorcycles and modify them to your liking. If you like racing, we also recommend you to try CarX Street.

As you may know, drag races are not very long. If you like fast racing, then Rebel Gears Drag Bike CSR Moto is exactly what you need. 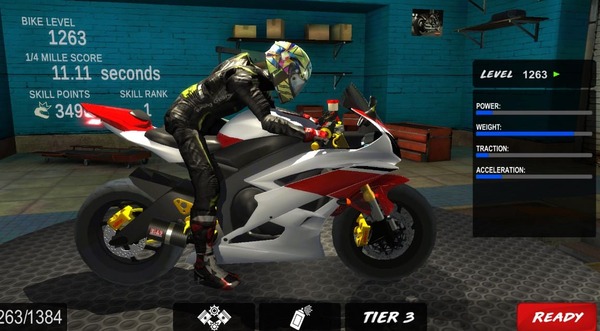 One of the main modes in Rebel Gears Drag Bike CSR Moto is “Normal Race”. As part of this mode, you take part in a classic drag race. Such races usually offer you a classic duel in which you have to drive in a straight line and come to the finish line first. There is also a mode here with various tests, during which you have to complete some unusual task in order to pick up the maximum reward.

The list of tests updates regularly, which makes them more diverse. Play also a mode in which you need to pass the specified section of the route in the allotted time. This mode is one of the most difficult, as you will be required to have perfect gear shifting and stable engine operation. If you want to relax, you can just drive around the city.

If you are a fan of engine roar and love to collect expensive sports cars, then you should definitely download Rebel Gears Drag Bike CSR Moto. There is no need to talk about any storyline here, since the project focuses on multiplayer gameplay. A lot of emphasis comes down not only on improving, but also on buying all kinds of motorcycles.

All of them differ in classes and categories, which players have to take into account in the process of developing virtual racer. It In order to buy a new bike, you need to save currency for some time. Naturally, higher-end motorcycles require more savings from you, but it is worth it.

The race itself is a race in a straight line. Here you do not need to steer or turn using the handbrake, but you need to be able to press the gas pedal, sometimes releasing it in order to switch to a higher speed. You need to switch under certain conditions, when there will be a green mark on your speedometer. 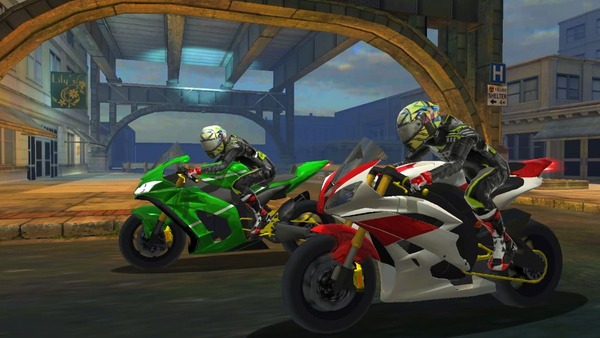 The more precisely you switch the speed, the less speed you will lose. Drive not for the sake of interest, but for money! Each win will bring you profit, but if you lose, you will have to give up your bet. Set a record, upgrade your bike and become the king of the streets.

Start the game with a short tutorial, where you can learn controls and ride a fast motorcycle in order to understand what to expect in the future. There should be no problems with the control. Before the start of the race, you need to warm up the rubber by pressing the gas pedal, after which it remains only to press the buttons to change gears. The more accurate and timely you shift gears, the more likely your bike will get to the finish line first. The game has both story races and those that allow you to earn more money and invest them in pumping. 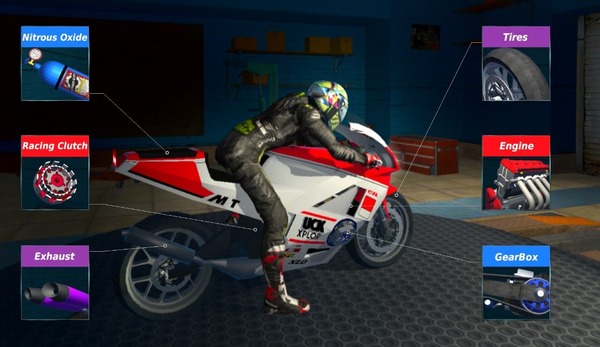 You can improve all elements of the vehicle in Rebel Gears Drag Bike CSR Moto, from the engine, gearbox, suspension, wheels and ending with the body. The lighter the bike, the faster it picks up speed. In addition, you can change the appearance of the motorcycle, repaint the body, install new wheels, add various stickers and so on.

Rebel Gears Drag Bike CSR Moto is a quality racing game in which you will control a bike and drive in a straight line. Outrun competitors, explore the city and upgrade your bike.