Renaissance Fighters is an arcade beat ’em up where you take on the role of Leonardo da Vinci, who was considered a weakling by everyone until he invented the muscle machine. However, the scientist did not know that its activation would summon demons to our world. Now he must deal with them. You will be beating up angelic statues, some of which have more muscles than our hero. Tap on the screen, as well as summon new cards through the gacha system, where our pumped da Vinci beats the statue again until it cries and blood flows from its nose. In addition, you can collect historical figures to help you, as well as go on raids with other players. We also advise you to download Decor Life and Rocket Bot Royale.

Read our review to understand all the intricacies of the project better. Players are waiting for an easy pumping of cards that affect various da Vinci indicators. This allows you to move on to the next steps. 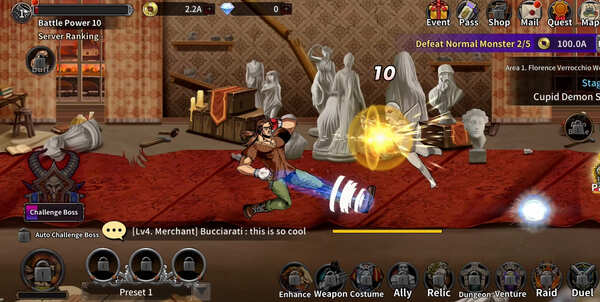 Your main character in Renaissance Fighters is the brilliant scientist and inventor Leonardo da Vinci. This time he outdid himself again and invented a muscle machine. However, something went wrong, and because of the beginning of her work, demons and other evil spirits came to our world. Since you are guilty of this, it is up to you to correct all this. Fight the statues by clicking on them. Also during the gameplay, you will be able to meet other famous people in the past who can help you. More on this below.

Assemble a team of heroes

Introduction to Renaissance Fighters gameplay begins immediately with the help of simple missions that are designed for learning. There you can master all the subtleties of the gameplay and controls. Main goal of any gamer here is to collect the best characters in your collection, from which you can then create a unique and invincible team and defeat all opponents in the arena. Characters here are recognizable to every person. Each of them has its own characteristics and abilities, so you have to choose wisely. The game also has a lot of humor, as the developers did their best.

The breathtaking storyline of Renaissance Fighters contributes to the dynamism of the fight and the vividness of the experience. Another novelty of this genre will be an opportunity to go to a fantasy world to take control of the actions of brave heroes. They participate in battles in the arena, defending their ideals. A colorful virtual story with a fantastic plot, two hundred different heroes and fierce battles will appeal to every user. You can prove yourself, compete for leadership, let off steam and performing feats in the name of military glory.

You have to tap a lot on the screen in Renaissance Fighters. This is necessary in order to defeat your enemies in the form of statues. In general, this is where the gameplay of the application ends. Just tap the screen a lot to achieve the best result.

By the way, all the battles in the project include heavy rock music, which adds adrenaline to the battles. Otherwise, the battles are boring until you unlock a new character or strengthen the main character, thereby giving him new characteristics.

Download Renaissance Fighters mod APK, which will give you unlimited money. 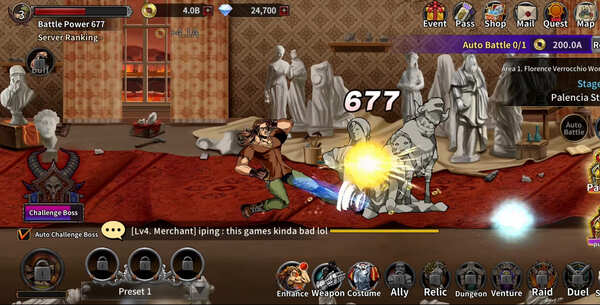 The story revolves around a lonely hero who must defeat all the monsters in order to protect his homeland and restore peace. You will fight these enemies on your own in this single player game.

Collect the necessary artifacts, weapons, armor to develop. Customize your fantasy hero to your liking. Complete hundreds of levels to challenge all the monsters in this universe. Meet the great figures of the past and help Da Vinci defeat all enemies.

Renaissance Fighters is a clicker with many references and Easter eggs to other projects. In general, the game turned out to be exciting, although not without flaws. However, you can fully enjoy this application with the help of the mod not money.