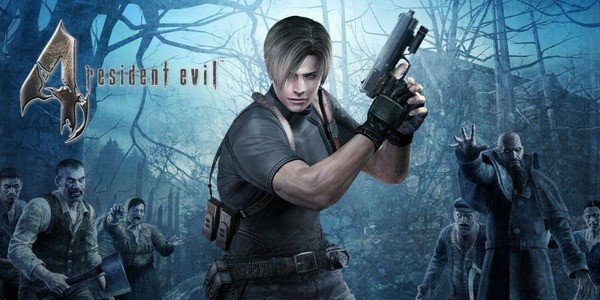 Resident Evil 4 is a multi-platform game that made it to Android after PCs and consoles. Immerse in fascinating action horror, which events unfold in 2004. Play as a special agent from the US government forces who travels to Europe in search of president daughter, kidnapped by a secret organization. The search leads Leon to a small village in Spain, which turns in hell when almost all the villagers become extremely hostile. Your main task is not only to survive, but also to save the president’s daughter from inevitable death. Complete your mission shooting off crowds of enemies along the way. Among other exciting action games, our team recommends you World War Heroes and Call of Duty: Mobile.

The Resident Evil series needs no additional introduction, but still you can find out main features of this game.

One of the interesting mechanics of Resident Evil 4 is interaction with the president’s daughter Ashley. You have to get out of enemy clutches together with the girl, which at the same time hinders and adds interest to the gameplay. Your hero needs to protect Ashley and order her to stand still, follow the character, or hide in cover while you shoot enemies. In no case, don’t let your opponents kill the girl, as otherwise your mission will fail. Moreover, in some moments of the campaign you simply need the help of your partner, since only she can get into some places and help the hero, where he cannot cope alone. 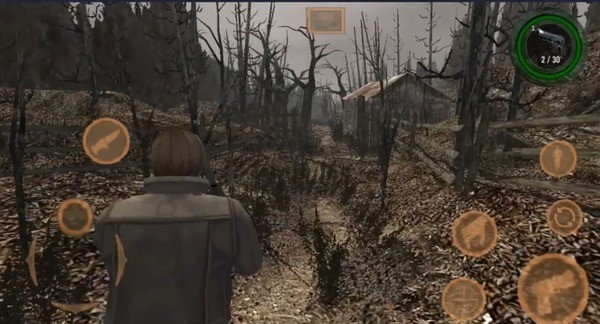 In order for the user to enjoy the gameplay properly, the developers of Resident Evil 4 have implemented many interesting and spectacular cut-scenes. However, you can not only observe, but also directly participate, using the QTE mechanics. That is, the user needs to tap on a specific part of the screen at the right time to be successful. Therefore, you can dodge blows or avoid falling into the abyss. If the hero fails to do everything correctly, then it is necessary to start all over again

The creators of Resident Evil 4 have endowed all characters with a strong AI. Enemies break down doors, knock out windows, use improvised means and even dodge bullets. There are several moments in the game when you have to defend house from hordes of vicious enemies alone or together with a local partisan Luis. In fact, you need to survive the siege. You can fill up entrances and windows with boxes and knock down stairs. However, more often the enemy still breaks through and you have to strain yourself. Still, you have to save the life of president’s daughter, who at that moment is hiding somewhere in a garbage can. Throughout the entire walkthrough, you can feel that everyone wants to kill you, which gives the game an additional atmosphere. The creators have put a lot of effort into making the player feel like a cornered victim. 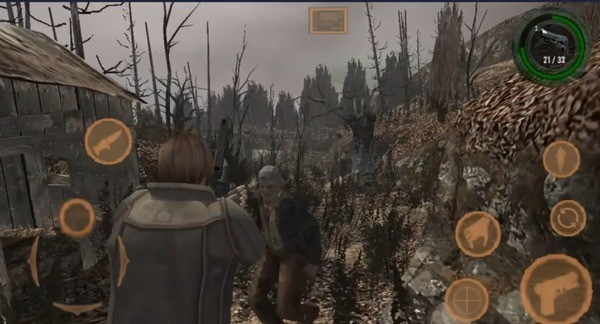 Choose from a huge arsenal of weapons

Resident Evil 4 has detailed and worked fighting process. If you defend from man with a scythe, you can shoot in the scythe, in the arm, in the legs, and shoot off the head. The developers thought out physics to the smallest detail along with well-done shooting. At the same time, there are enough weapons. Several types of pistols, shotguns, rifles, various grenades, rocket launchers, etc. Moreover, it is possible to upgrade any weapon. There are practically no free weapons in the game. You have to buy it for coins collected from the killed.

Enjoy the stunning visuals in Resident Evil 4. Keep in mind that the game release was originally on consoles and PCs, but app has practically not lost in quality on Android platform. Brilliantly designed levels and realistic physics can completely immerse you in this scary world. In addition, ominous music and heart-rending screams only emphasize the atmosphere of all-consuming horror.

To gain access to new weapons and its improvements, players in Resident Evil 4 need money. As we already said, you can collect coins from killed enemies or caches on the map. All this can be quite exhausting and difficult. We suggest you to use our mod and get an unlimited money for the purchases. 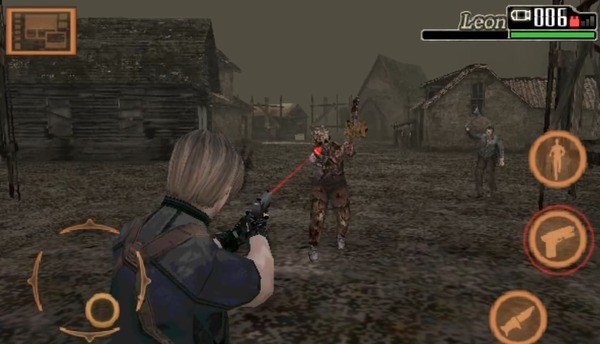 We tested Resident Evil 4 for android devices. We guarantee you its correct operation and functionality of unlimited money option. With its help, you can choose any weapon and improve it at your own discretion. Don’t worry, the mod is safe as our team has checked it for malware. Please read the installation manual carefully and enjoy the game.

Those familiar with the past games in the series remember that a significant part of the gameplay includes quests. Practically nothing has changed in this regard for Resident Evil 4. If you think that you need to shoot back from the crowds of various ugly creatures for most of the time, you are greatly mistaken. No, it is possible to shoot enough, but developers still propose riddles that require you to think seriously. They thought out quest elements in the best possible way.

We are pleased with the variety of locations. Hero starts the game in a rural area filled with peasants, and then action turns into gothic castles and dungeons. In the end, action turns into the classic high-tech series – locations with soldiers, lasers and so on. 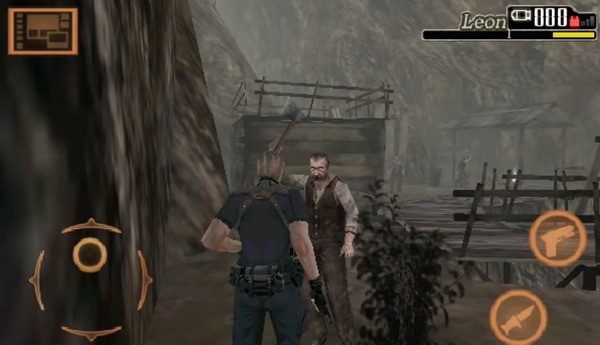 In general, Resident Evil 4 is full of impressive moments. Players have the opportunity to hunt a river sperm whale, fight two sisters with chainsaws, run from a giant statue and much more. Most importantly, all these events fit harmoniously into the narrative and only complement the overall plot picture.

Resident Evil 4 is a high-quality action-horror game ported to Android no less well. If you have previously played this game on consoles and computers, then we advise you to refresh your memories on Android. Moreover, if you have never played Resident Evil, then rather download it with unlimited money solution.

How to install Resident Evil 4 Mod?

Don’t forget to delete the original version of Resident Evil 4 before installing our modified version to prevent errors during installation process.