Retro Bowl is a sports simulator from the developers of New Star Games Ltd. made in Dendy style, so it can appeal to all fans of retro gaming. You have a completely American football team at your disposal. The user’s task is to build combinations, win matches and bring their players to the main goal – conquest of the main prize. In addition to the game itself, you have to manage team composition, communicate with journalists and maintain a good atmosphere in the team. Feel like a real coach. Get on with your day-to-day responsibilities and train your quarterbacks, kickers and defenders to win. If you are interested in sports, then our team has also prepared Club Soccer Director 2022 and Soccer Battle – 3v3 PvP.

Retro Bowl has a 4.7 rating based on over 300,000 reviews. The application has almost 5 million downloads, while users note the addictive gameplay, the absence of ads and the high-quality simulator component.

Be not just a coach, but also a manager

We should start with the fact that players have the broadest authority to manage team in Retro Bowl. Yes, as often happens, you have to develop tactics for your players, choose a squad for the game and react to what is happening during the match. However, the player’s responsibilities do not end there, because he is also a manager. Communicate with the press by answering uncomfortable questions, monitor the mood of your players and perform other minor duties. By the way, the app has a command change function. If you are tired, then you can always head another club in order to try to get to the top of this sport with him.

Each team can only have 10 players. You have a budget that allows you to buy players and pay them a salary. At first, it will be quite small – this indicator depends on your reputation. However, if you win, your reputation, and therefore your salary, will increase. The developers have not forgotten about transfer windows either. They open at some point in the season. Other clubs will offer you money for top athletes, but you can also buy the player you like. In this case, it is necessary to calculate the budget of the club so as not to overpay for a newcomer, but at the same time, it is enough to pay him.

In addition, the mood of the players plays an important role in Retro Bowl. It largely depends on what model of behavior you choose – tough or more loyal. Your style affects the outcome, but also the attitude of the players towards you. You also need to remember to communicate with loyal fans. The more fans you have, the more money the club receive for the tickets and merchandise sold.

Tactics and economics are always interesting, but such games focus primarily on simulating direct matches. There is no problem with that at Retro Bowl. If you do not understand the rules of American football or have never played such projects before, then you will probably have a hard time understanding at first. However, you will understand in just a few minutes everything. In addition, the game gradually explains the main points to the user, inviting him to participate in training.

Control management will not cause difficulties even for a novice gamer, because it only requires one finger. For example, just swipe in the desired direction to move to the side. A similar pattern is for the pass, but the swipe should be sharper in this case. It is important to calculate the trajectory for the pass correctly, because otherwise the opponent can intercept the ball and carry out a quick attack.

Retro Bowl is a completely pixel-based game and its style is very similar to 8-bit games on Dendy. The project also features similar music inherent in projects of 80s and 90s of the last century. Despite this picture, it is quite interesting to play and many users call this game the best in its subject matter.

To buy the best players and increase your chances of winning, Retro Bowl requires money. Earn them for victories in matches and tournaments, but this is not so easy to do. To facilitate your task, we suggest downloading our mod for unlimited amount of money.

Money mod works as follows: when you launch the application, you will see many saves. Download them or delete by starting a new game. Saves include a lot of in-game currency on the account. If the user decides to start a new game, then there will be no money. Therefore, you can decide for yourself how to build your gameplay – with or without money. The gamer has all the possibilities for this. 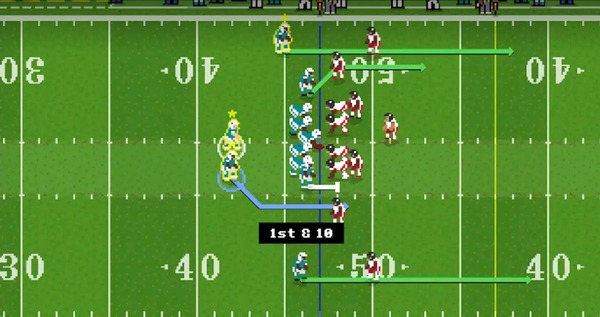 Retro Bowl cannot please users with modern graphics, but it can give something more – fun and thoughtful gameplay, as well as a little nostalgia. If you are familiar with the first generations of game consoles, then the project in question will certainly delight you. By the way, such graphics have one more advantage – the application is completely undemanding to the device.

Choose the best team, build your squad and come up with the best tactics for your players. Don’t forget to make transfers, communicate with media and fans and improve infrastructure. Everyone can feel like a full-fledged American football club manager.

Retro Bowl is a great game that all American football fans will love. However, if you are not yet familiar with this wonderful sport, then it is time to get acquainted. You just need to download the project in question to your android device.