Roblock Squid is an interesting project developed by Unicorn Game Studio. In general, the whole game focuses on a borrowed idea. Not so long ago, the series “Squid Game” was released. The project immediately became very popular. There were people who wanted to get some popularity. Thanks to this, a variety of games, parodies, music, clothing and much more began to appear. This application was no exception. You also have to participate in some kind of competition. Winning will make you a lot of money and save your life. People had to play children’s games and the loser died. Everything is the same in this game. If you want not only to win, but also to survive, then you will have to try very hard. Walk the path of number 456 to the end. We also recommend downloading Arena of Valor and Action Taimanin. 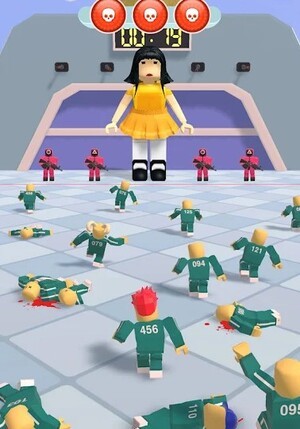 Before installing Roblock Squid, you need to assess the quality of the project. This is very easy to do. First, you need to pay attention to the number of downloads – there are more than a million of them, which says a lot. Secondly, there are many positive reviews. There are also negative ones, but only because of advertising inserts. In any case, the project managed to get an excellent mark – 4.1 points.

To understand the meaning of everything that happens in the game, you should at least a little familiarize yourself with the plot of TV show itself. In general, the game plot corresponds to it. The plot revolves around a man mired in debt. He often bets and often loses. One day he receives an invitation to play a game. Now, he has to fight for a huge amount of money with 456 players. You only need one thing – to survive. Thus, you will be the 456th player. There are many trials to go through in Roblock Squid, where the loser will die. In any case, it is necessary to participate in tests that are very similar to children’s games.

Various trials where you need to survive

It all starts with running across a large field. A huge doll will be watching you. If you see a green scale, you can run and if you see a red one, you need to freeze. They will tell you about this first. Once you cross the red line, you are safe. However, the point is, the game is timed. If you do not have time to run before the stopwatch expires, you have to say goodbye to life. If you jerk during the red light, you will die.

An equally interesting level is the one in which you need to cut out a cookie. To begin with, you have to choose one of four closed boxes. They can contain a circle, a triangle, a star and an umbrella. The more complex the shape, the more difficult it is to cut. It will be necessary to guide the needle along the contour, and release it when the scale is full of scarlet color. Then you just need to separate the excess parts. To do this, you need to click on the screen at the right time. There are other tests – if you watched the series, then you know very well about them. Developers perfectly implemented it in Roblock Squid. 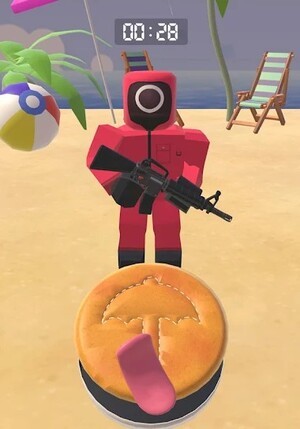 As you remember all the players were dressed the same and did not stand out in any way from the general background in the series. It would be too boring to do the same in Roblock Squid, so the developers have introduced many skins into the project. Each level ends with a tally of the money you earn. After filling the scale of new skin progress, as soon as you fill it to the brim, you can change your appearance. Thanks to this, you can slightly diversify the gameplay.

To differentiate yourself favorably from other players, we suggest you download Roblock Squid mod APK, which gives you the ability to unlock all skins.

All the playable characters in Roblock Squid take part in an amazing project, where they have to go through specially designed thoughtful tests. The main idea of ​​all levels is the most ordinary children’s entertainment. Everyone in childhood played dodgeball, tug-of-war and the like. The only difference between what happens in children and here is that all characters who pass the tests can die if they make even the slightest mistake. 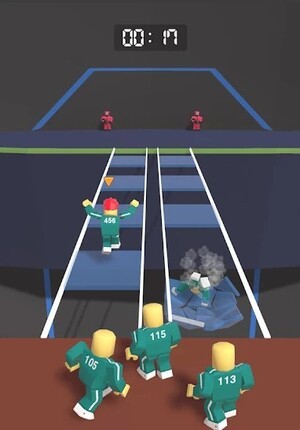 The important point is that the game focuses on the concept of most applications that have a competitive moment. Initially, all players must get together and then enter the large lobby, where the test is pending. After that, the test begins. Then luck comes into play, which works differently depending on the mode. The order of certain tasks in this experiment changes randomly.

You will not see death here, but the outcome is clear. Therefore, the project has an age limit of 16+. This mechanism is easy to deceive. Therefore, it is advisable for parents to monitor what their children are playing. This will not cause much damage to the kids, but it is also undesirable to play in any case.

Roblock Squid is a high quality and interesting project that you will like. It will help you to relax after a hard day at work, as well as just kill time. In any case, you have to complete many tasks, go through many levels and receive numerous awards and more.