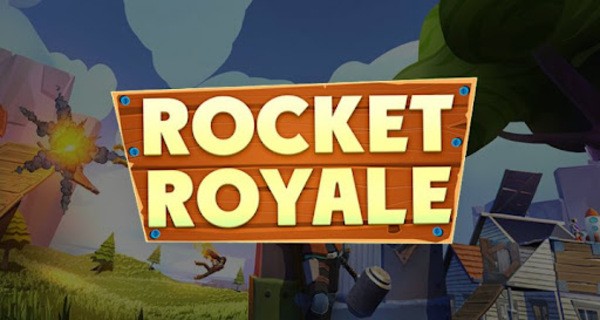 Rocket Royale is a third-person shooter mobile app developed by GameSpire Ltd. You have to fight in the “royal battle” mode. The game focuses on multiplayer, so connect your device to the network to access the gameplay. All users appear on one island and the main goal to stay alive alone. Your task is to build a rocket on which you can escape. The main difficulty lies in the fact that there are simply no parts for several spaceships. Players have to compete for both resources and blocks for building vehicles constantly. Download also Counter Attack and Combat Master Online FPS. 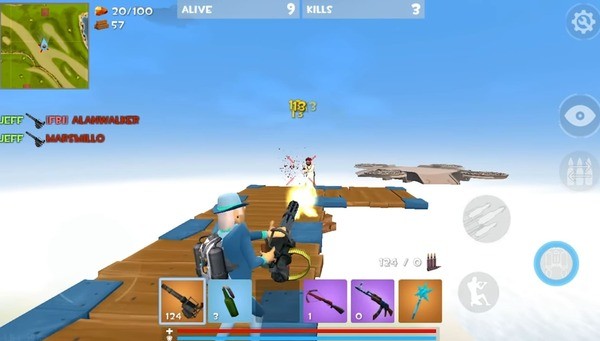 Project Rocket Royale is a casual shooter with elements of a construction simulator. If you are interested, read on.

About twenty people participate in the match. This is not very much, while the map is rather big, so you can always hide from the rest. At the same time, there is no safety zone – nothing shrinks and does not drive players towards each other. It may seem that the match can go on endlessly in such conditions. However, it is not.

There are portals on the map with which you can teleport from one end to the other. The match begins with the entrance to such a portal. However, all come out in different places. The portals are located on the tops of the hills, which are not so easy to climb. However, the building system helps here. By switching to build mode, you can take a hammer and break the nearest building that turns up. After that, resources appear nearby, which you can only collect.

There are three types of parts – wall, ceiling and angled board. Use the latter as a ladder. It is very convenient to climb the hills to get into the portal with its help. By the way, the created buildings can be broken down so as not to make life easier for rivals. You will also return the resources spent in this case.

There is also a classic way to win in Rocket Royale. You just need to shoot everyone, remaining the only living player in the match. Many types of weapons will help you with this – more than twenty. They vary in color. The same weapon of different colors can differ significantly in characteristics. For protection, you have first-aid kits and armor – replenish both indicators by using jars or a first-aid kit. You don’t need to collect any body armor.

Be the first to leave the island!

Well, if you are not very good at shooting, then you can just build a rocket and fly away! To do this, you need to collect a hundred units of a special resource, denoted by gears. You can get it by breaking one of the meteorites with a hammer, which regularly fall to the ground and burn for a long time. As a rule, exactly half of the required number of resources is mined from one such stone. 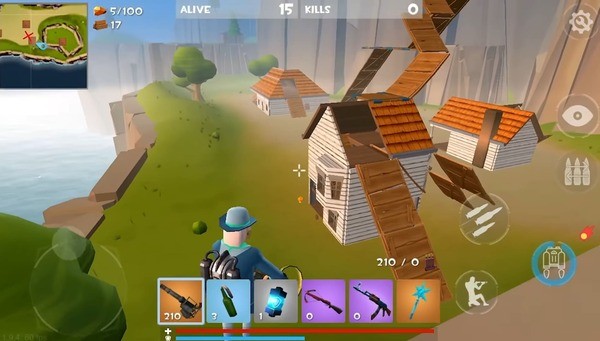 After collecting the required amount of metal, go to the construction mode and select the rocket there. Having installed it, you will see how another scale in Rocket Royale gains under the lives. When it fills up to a hundred, you can go to the rocket and fly away. The remaining players will start losing lives and will soon lose, leaving you the only winner.

Pixel-style 3D graphics made in Rocket Royale. There are no spectacular special effects in the game, but it also does not look outdated and faded. On the contrary, the picture is bright and memorable.

We suggest you download Rocket Royale mod for unlimited money.

Rocket Royale is a very bright and captivating action project made in the classic version of the battle royale direction. Here you also have to participate in fierce and bloody battles against several dozen players, where only one player can survive and win the competition.

Actions develop on a huge map, where you can land at any point, from where survival begins. The first thing you need to do is find useful resources and weapons with which you can fight back aggressive and very dangerous players. 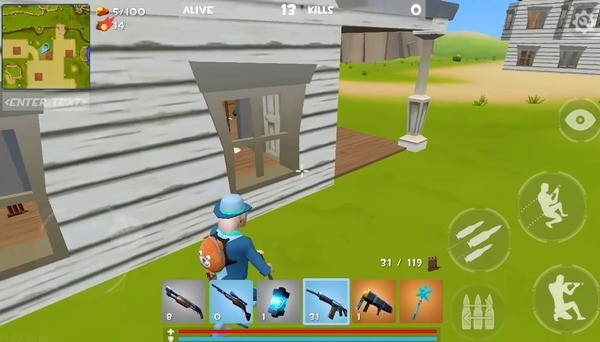 Keep in mind that you should not sit still, otherwise the character will die by the playing area, so movement is the main key to victory. Also, do not forget to engage in construction. This allows you to hide from the fire of opponents and take a more advantageous position during battles.

Appear on the island and start collecting resources. Chop trees and get other materials. Build a variety of buildings, including defensive structures, so that other players cannot reach you and take your almost finished missile. Choose your tactics and try to win the next fight. Destroy any object in the location and collect exactly those materials to build a rocket. There are no parachutes and constantly increasing death zones. Instead, there are teleporters here, which make the game mechanics completely different from competitors.

Rocket Royale is an exciting action game where you can win in several ways. If you are looking for variety among similar projects, then pay attention to this application.