Rome Empire War: Strategy Games is a mobile global strategy game in which players have to try on the laurel crown of Rome emperor. The application invites the user to plunge into the era of antiquity, take command of the Roman legions and lead the republic to a single power. Here you need to methodically understand and delve into all game mechanics, explore gameplay dependencies and constantly experiment with combat tactics. On your shoulders falls not only military affairs, as is the case in most similar products, but also political affairs, development of the capital and much more. If you like strategy, then pay attention to Alien Creeps TD and Card Guardians.

Find out all about the game by reading our review.

The developers of Rome Empire War: Strategy Games preferred not to invent a plot, but to refer to a real historical chronicle. If we are talking about a story campaign, then here you have to go through all the high-profile wars and take part in all the key battles that the Roman Empire fought during its conquests. Each mission will immerse you in a certain historical period and will offer you with your methods and tactical skills to cope with the enemy’s army or fleet. The Samnite Wars, the Punic Wars, the Pyrrhic War – these and many other conflicts you have to resolve on your own. 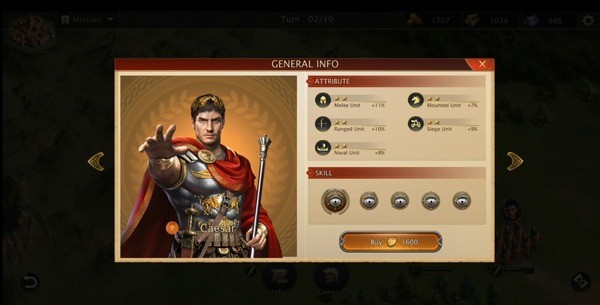 Control your troops, give them certain tasks and constantly pump them to increase their efficiency. The generals are on demand here either. Choose from a huge number of famous historical figures who lived in this era. Each hero has his own tree of talents and skills that will improve certain types of troops controlled by the character. Caesar, Scipio, Hannibal, Pyrrhus and many others. Each general will bring bonuses to your army, but it is important to use him as intended.

To win in Rome Empire War: Strategy Games, players need powerful units and weapons. Fortunately, there are no problems with this, just spend resources and money. Use cavalry, ballista, catapult and warship. Let the enemy surrender himself, because when he sees such a powerful army, he will feel uncomfortable. By the way, in this project units gain experience when they are on the battlefield for a long time. A soldier can become more effective in battle after tempering in several fierce battles. Any such recruit can radically change the course of a battle that at first glance seems already lost. In addition, your troops in the application will have different skills. Therefore, the battles are not monotonous. Try to use mind-blowing skills to control the battlefield one hundred percent.

This one follows from the previous point. If the game has such a variety of units, then there can be a great variety of strategies. Build your army according to any system you like to achieve maximum effect. Put archers back, and attack the gates of an unfriendly castle with a ram, catapult or ballista. Everything can change at any second in Rome Empire War: Strategy Games. In addition, you should not forget about the varied landscape of the area. After all, you may encounter hills, mountains and oceans along the way. This in the bark will change the course of the war. Try to cross the mountain to dazzle the enemy or build ships and cross the river. You are the commander-in-chief and the route of the army depends only on you.

To recruit the best troops, you need in-game currency. Download our mod for unlimited money to become the most powerful military leader in the entire Roman Empire!

A distinctive feature of Rome Empire War: Strategy Games is the local mechanics of making moves on the map and the battles themselves. You have to move around the map step by step, that is, each squad has its own limited number of action points. The field itself has a clear division into cells along which you have to move. You will meet both enemy units and their cities that you need to capture on the map. To start the battle, bring your squad close to the enemy squad and press the battle button. The squads attack each other in turn.

Events in Rome Empire War: Strategy Games cover the events before the formation of the first Triumvirate. You can personally go to Iberia, Gaul, cross swords with Carthage and Macedonia. At the same time, the project tries to deal with the history of the formation of the Empire extremely delicately. The game has a separate mode for those who want to try their hand at being a commander of the legion in a battle that is significant for Rome. The narration in the game is leisurely, no one restricts the user in actions, but you also do not have complete freedom of action.

Every user sometimes wants to feel like a real commander or emperor, which is what strategies can do. If you have been looking for a high quality and large-scale project dedicated to history for a long time, then Rome Empire War: Strategy Games is your best choice.