Rope Frog Ninja Hero offers you to become a superhero and start maintaining order on the city streets. To do this, he has special abilities and a special latex superhero costume, equipment and various small arms. During the game, you will be able to catch criminals, as well as travel around the metropolis and its surroundings on a variety of selected vehicles. The main purpose is to clear the streets of city from bandits and suspicious personalities.

At the same time, the hero can run on rooftops, jump, run along the edge of the road and take the necessary city transport for himself. After catching numerous small scammers, you will gradually get to the bosses in large criminal organizations and become a clever police assistant. As a result, inhabitants of the city will be able to exist in peace. If you like this kind of gameplay, then also download Dream Journey Makeover and DragonVale. 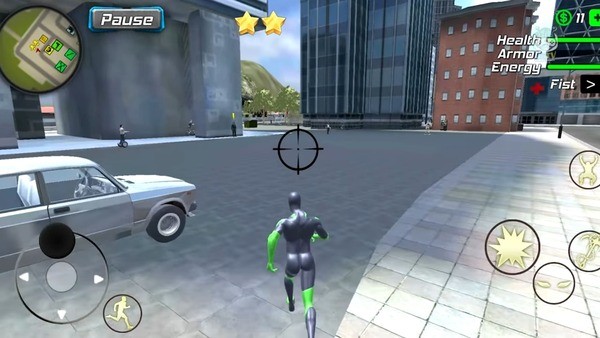 This game will definitely appeal to all adventure lovers. If you are interested in the details, then read our review.

Become a superhero and clear the city

In a stylish latex suit, the main character of Rope Frog Ninja Hero resembles a character from legends and films. The character controlled by the user has unique abilities. He loves his hometown and is ready to do everything to protect civilians. It is not enough for him to save cats. The goal is more serious – to clear the streets of the city from bandits and other suspicious personalities. Moreover, in addition to own superpowers, cars, firearms and other things will help the frogman. If necessary, he is able to jump on rooftops, run along the edge of the road and take city transport.

Of course, you will have unique superpowers in Rope Frog Ninja Hero, such as shooting a laser beam directly from your eyes, ability to jump over buildings and shoot long distances with a rope. Protect the peace and tranquility in the city of New York. You will be able to see all the city sights while you hunt for gangsters in your vehicle. The hero moves at lightning speed through the streets of the city, jumps on buildings, jumps on the roofs of moving cars. Moreover, you can enter any room through a window. He is faster, stronger and more talented than any bandit is. In some ways, the character’s abilities resemble Spider-Man, only the costume is different.

Weapons and vehicles will help you achieve your goals

By the way, a full set of American cars and even motorcycles is available in Rope Frog Ninja Hero. You will be able to make sharp turns on unique cars. In addition to transport, you also have access to weapons, including firearms. You can acquire weapons and cars in an honest way by buying, or you can simply steal them, both from bandits and from the government. Destroy bandit groups with a huge selection of weapons or use your super powers, namely the eye laser. Therefore, if the weapon does not save you, then your skills will come to the rescue. 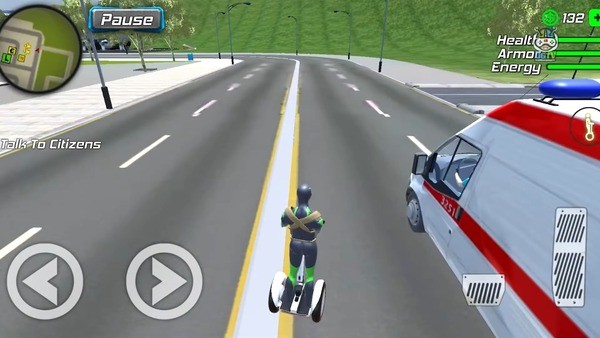 The quality of graphics in Rope Frog Ninja Hero is high, which allows even the most demanding users to enjoy the game. Enjoy beautiful views of the city from a bird’s eye view, and will be able to hear the sounds of a big city that lives its own life.

Mod for unlimited money gives an unlimited supply of game currency, for which you can purchase various improvements. Villains cannot hide!

Rope Frog Ninja Hero is an app where you have to meet a brand new superhero who is ready to save everyone in need. Currently, there is a huge number of apps related to various superheroes, most of which have been known since early childhood, so playing them often gets boring very quickly. If you want to try really something new, then you should pay attention to this particular utility. There is almost everything for fans of shooters and free movement around the city. 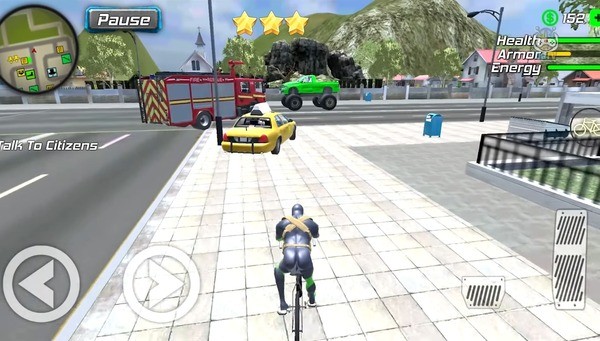 It is worth noting that the city here is really very colorful and unusual. There is not only a huge area for performing various tricks, but also a lot of cars, people and other features that make this city truly alive. You will be able to play as an amazing human frog, who has a unique green suit that hides his true face. However, everything is in the best traditions of GTA and similar projects. The app is very popular among users from all over the world for this reason.

The controls in Rope Frog Ninja Hero are quite simple, and even classic. For this reason, even those people who have absolutely no experience can play it. If we talk about the plot component, then it does not exist as such.

Get a complete freedom of action. You can do everything you need to cope with crime or just fight with a variety of characters. As a result, the game is very high quality and unusual.

Rope Frog Ninja Hero is an incredibly interesting game. Performing a variety of tasks, you need to become a real boss on the city streets and defeat all the criminals.