Angry Birds is the very first classic arcade game from Rovio Entertainment. The game was not available for download for a long time, but now you can enjoy updated version with a new engine. A lovingly made remake of the original game released 10 years ago is waiting for you. According to the classics, the gamer must go through many levels. You have to shoot birds from a huge slingshot at the structures of evil pigs. If the building falls, and all the pigs are destroyed, then the player receives the maximum number of stars – three, a certain number of points and gold coins. Sometimes it will not be easy and then boosters will come to the rescue – special items helpers. Move on to unlock new birds and beat your friends’ records. Download arcade games like Zookemon and Valley: Cooking Games & Design.

Go back to where it all began. The universe itself includes not only games, but also an animated series, as well as a full-length cartoon. All this became possible after the appearance of Rovio Classics: Angry Birds.

Enjoy a chain of levels that you have to go through. It is advisable to hit pigs from a slingshot with a bird to destroy the tower with one blow. As soon as the last pig bursts, the victory is yours. The remaining feathered “shells” add many points. First, go through the training tournament, so you can understand what is what and how to practice. Then warm-up, close all stages. If the result at any stage does not suit you, you can go through again until the number of stars is equal to three. Show all your previously acquired skills and then upgrade the birds to complete Rovio Classics: Angry Birds. 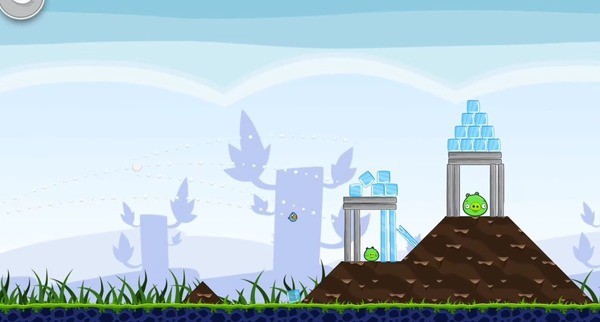 All classic characters are the same as before

Each level brings you a limited number of birds, which you will launch at enemy fortifications from a huge slingshot. Each of the heroes has its own unique abilities that help in overcoming obstacles made of certain materials. If we talk about wood, then Chuck (yellow bird) is able to break through fortifications from this material. In matters with stone, the Bomb is the best, which explodes on contact with the surface. Not to mention the Blue Trinity, which ideally cracks down on glass and other fragile materials. Therefore, each bird has its own strengths and weaknesses.

Complete levels and find all the golden eggs

Each chapter of Rovio Classics: Angry Birds provides you with many unique stages, each of which is desirable to complete with three stars. During the passage, you may come across golden eggs, which collection promises you the opening of bonus levels. There are not many collectibles. If we talk about weekly tournaments, then every week the developers offer gamers twelve new stages, which passage provides you with worthy rewards and a lot of fun. Compete with your friends in tournaments, who want to take first place and get the best reward like you.

As for the graphics of Rovio Classics: Angry Birds, here the game deserves a separate rating with the maximum score. The characters themselves look very funny and cartoonish. Locations offer to enjoy three-dimensional graphics with a whole bunch of cool objects and effects. The developers have tried and improved the picture, now the app looks even better in comparison with the ten-year-old project.

Rovio Classics: Angry Birds is a classic game of the entire series, but for a long time the developers did not support their very first project. There were no updates, and the game was impossible to download in general. Now a remake of the app has appeared which everyone can enjoy, from those who want to remember the classics. However, this game is paid, so it will cost you about one dollar. You can support the developers, but there is always the option to download the app free.

The gameplay in Rovio Classics: Angry Birds comes down to passing the levels that the developers have prepared. Your main task at each stage will be destruction of all the pigs that are on the map. For this, you must shoot from a slingshot and use the abilities of the birds. During the game, you can earn points for all destroyed buildings and killed enemies. Use points in order to score stars, from one to three maximum. If you could not complete one of the stages for the maximum number of points, then replay the level later. In addition, the developers have added the ability to play competitive games against other players, as well as a rating system.

This is not an ordinary arcade game, but a real puzzle game in which players have to explore the room to find loopholes that can help them win a quick victory. Find places with dynamite, balloons and various structures to shake it all up and drop unsuspecting pigs on their heads. The larger the explosion, the brighter your victory, but you can use not only the scenery, but also the main characters. After all, each bird has its own unique abilities.

The famous universe of Rovio Classics: Angry Birds has pleased gamers with many worthy games of various genres. We offer to download the unchanged classics in a new wrapper.