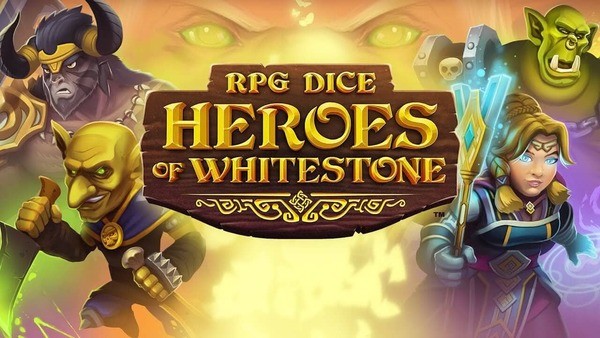 RPG Dice: Heroes Of Whitestone is a turn-based fantasy RPG with an isometric view. Roll the die to start an epic and dangerous journey where you will defend your own lands from fantastic creatures and evil monsters. They crawled out of the dungeons and attacked people, destroying entire villages. Call numerous heroes to the battle, endowed with huge powers and having unique defense and attack abilities. In the process, upgrade your characters and think strategically by properly placing your warriors on the battlefield. Acquire reliable armor, swords, magic staves and heavy maces, creating an invincible team and destroying goblins, orcs and elves. Join a powerful guild as you raid the most remote parts of the map with bosses. Win and come back with bags full of loot. Also, do not forget to go through numerous quests and fight in a single player campaign, moving along an interesting line of an exciting storyline. Also, download Awaken: Chaos Era and Polygon Fantasy.

RPG Dice: Heroes Of Whitestone is a strategy game unique in its genre. To understand this, we advise you to read our review to the end.

The main task in RPG Dice: Heroes of Whitestone is to overcome the playing field by completing quests. You will move around the cells, as in a monopoly, by rolling a die. Depending on the number that falls on the die, you will move forward a certain number of moves. There are battle cells bonus cells and many others on the field itself. Globally, you need to get to the finish line in order to move to the next location. By the way, it is possible to increase the percentage of the numbers you need. For this you need to pump the die, and then make perfect throws.

If your character in RPG Dice: Heroes of Whitestone lands on a square with a battle, then you start it. There can participate no more than five heroes from one side. The battles themselves are turn-based. At the same time, they do not occur in automatic mode. Player chooses whom to attack and what spell to use. After the attack, the hero runs back to his place. When he runs out of vitality, he disappears from the field. By the way, during battles, you also need to roll a die to determine what type of attack you will crush the enemy.

Fight elves, gnomes, goblins, orcs, paladins, wizards and ordinary mortals. It is important to destroy the enemy unit before it destroys you. Every time you will take part in several dozen battles. Over time, the acceleration function becomes available to make battles go faster. There is also energy in the game. Each duel takes away a unit of energy from you. When it ends, you will have to wait for recovery. Alternatively, players can buy energy for real money.

Gather a team of heroes and upgrade them

To resist the enemies successfully, RPG Dice: Heroes of Whitestone offers you assemble a team of brave heroes. Of course, they all differ in special skills, indicators and specializations. In total, the game features hundreds of characters. New heroes can be unlocked as you complete quests, as well as with the help of summoning scrolls. Don’t forget to upgrade your wards. Improve their attack, defense, vitality, armor, speed, resistance and critical chance. You also need to equip the characters by putting armor and artifacts on them. Each hero has his own special skills, so it is worth taking different heroes into the team. Someone maintains the health of the entire group, someone attacks enemies with massive spells and someone strikes with precision and power.

RPG Dice: Heroes Of Whitestone has colorful 3D graphics and good soundtrack. Developers well drawn all the characters and their skills. It is also worth noting a variety of enemies, because all the races from the fantasy world are available here.

We bring to your attention a mod that allows you to activate a special menu. You can adjust the attack and defense indicators of your heroes during battles in order to win quickly and without problems.

RPG Dice: Heroes Of Whitestone allows protagonist to go around in circles on a small map, encountering random monsters, blacksmiths, and sometimes stumbling upon treasures and places to rest. You need to assemble a squad of five heroes, which differ in elements, pumping levels and rarity. The battles are turn-based, as you can set them to auto-mode.

The dice roll affects almost everything in the game. It gives buffs to hero in battles and chooses armor to improve when upgrading. Learn the plot through text dialogues and enjoy graphics and setting reminiscent of Warcraft universe. It is also worth noting PvP battles, guilds and leaderboards, where the users with the most points are included.

RPG Dice: Heroes Of Whitestone is an unusual game where you will need luck and skill. Roll the dice, take part in turn-based battles and upgrade your heroes.