Rude Racers is a racing game from Famous Dogg Studios. Play through the single-player campaign, where you will find a huge number of races, dangerous opponents and battles filled with action. In total, there are over fifty types of competitions. In particular, speed riding, races with elimination of the last participant, intense battles with enemies and more. It is not enough just to cross the finish line. Each chapter has unique types of tasks that will be a real test of your abilities. Get at your disposal new models of vehicles with convenient controls and armor. Choose different bonuses before the start of the next race. For example, motorcycle boosters, a temporary shield and much more. You can give your opponents trouble so that they lose control of the car and crash somewhere. If you are interested in racing, then also download PetrolHead: Traffic Quests and Furious: Heat Racing.

If you are interested in a brief description of the project, then read it in its entirety to form the most complete opinion about the game. 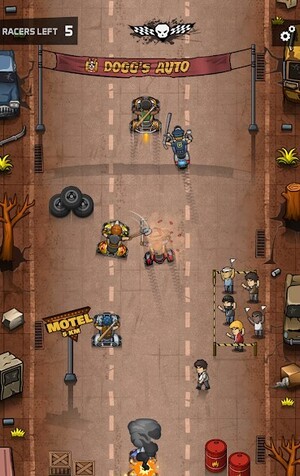 The main feature of Rude Racers is undoubtedly the combat system during the race. You can beat opponents with your hands, feet and even weapons. If you don’t have your own weapon, it doesn’t matter. At the same time, the ATV has a health scale. You cannot constantly get hits, because otherwise you can go out of the way. Races take place on full highways along the roads of cities, where you can meet cars on the road or people on the side of the road. This gives the game even more realism and a sense of the reality of what is happening. Try to take out all your opponents or just overtake them and finish first.

The essence of Rude Racers is very simple: several ATV racers compete for the title of the best. Races take place on tracks with obstacles, which makes them extreme (sharp turns, all sorts of unexpected objects on the road, cars, running animals) and picturesque. The campaign has more than fifty levels. Length of the tracks increases with each level and the opponents become faster and more skillful. It is worth noting that the application also has boss battles, which are very difficult to defeat. A new powerful motorcycle will mark the victory over him.

For the money won in the races, you can buy motorcycles (you can choose from 8 several options). Each motorcycle has its own advantages and disadvantages provided with eloquent description. Improvements relate to the speed, agility and stability of the motorcycle. Therefore, carefully manage your financial affairs in order to save up for a decent bike worthy of its owner. Take weapons in the course of the race from gaping opponents. You cannot touch anyone, but simply outrun everyone. 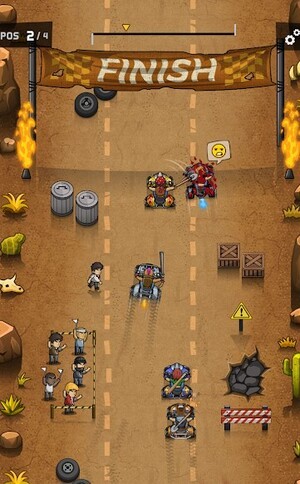 Rude Racers meets the player with fairly simple top-down graphics. At the same time, the project has many funny special effects that can please even sophisticated users.

Rude Racers is running low on fuel as well as money, as you will need many resources to upgrade your car. That is why we recommend that you download mod for money, as well as for infinite fuel.

The tracks in each level of Rude Racers take place in the city, desert and countryside. Size of the track increases with each subsequent level. As you understand, no one gave permission to bikers for the race, so in addition to oncoming obstacles, the police will also try to detain you. You won’t be able to die in the race. However, some moments can bring your loss in it closer. Your motorcycle deteriorates from a collision with a car or a tree. If rivals knock you off the ATV, then while you come to your senses and sit on it, some time passes. It is enough for your competitors to finish the race before you. Well, if a police officer knocked you off your motorcycle, then this will mean that the race ended for you with your arrest. 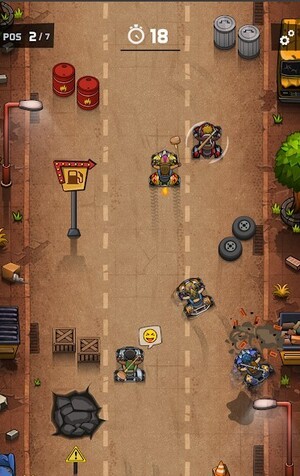 You can upgrade bikes in Rude Racers in several ways. Each new level offers you a choice on which bike to race, i.e. faster or more agile. Spend the money received for winning each race on various weapons and turbos. Among the weapons, we can mention a club, a stick, a chain, nunchucks, etc. You can take all this away from your rivals right on the track. If you do not have any weapons at all, then you can beat your opponents with your hand or foot. Punch or weapon strikes help to knock your race competitors off the iron horse. Kicks, on the contrary, help to get rid of an unwanted fight by pushing the opponent away from you.

Rude Racers is an interesting arcade racing game that is very similar to the console projects of twenty years ago. Get all opponents out of the way and finish first.