Run Guys: Knockout Royale is a game where the main task of main hero is to avoid many obstacles on the track and come first, outrunning all rivals. Various traps await you: spinning blades, swinging balls and much more. Use the additional capabilities of your hero. Jump, dive, climb the walls to overcome this or that trap. Show miracles of reaction and ingenuity to become the first! Win coins and change the appearance of your main character, make him unrecognizable. To win, the character must first go through the qualifying rounds, and then fight the strongest in the final. Unlock all new locations to get as much adrenaline and fun as possible. Everyone wants to win this crazy race, but there will be only one lucky person. For arcade lovers, we recommend trying out Spin Rhythm and Om Nom: Parkour.

When new game mechanics appear on the PC, their release on smartphones becomes a matter of time. Very often, it turns out that the developers of the original do not have time to make the port – completely different studios are doing this for them. Therefore, clones of successful projects appear, which are often distributed free of charge. Such a clone is Run Guys: Knockout Royale – the game uses the mechanics of PC hit Fall Guys.

The game consists of online matches filled with different tracks. There are numerous obstacles on the tracks, which are not so easy to overcome – especially when dozens of rivals are pushing around. Rest assured that each of them would push you into the abyss at the first opportunity. Therefore – push first!

The levels in Run Guys: Knockout Royale look like some kind of obstacle course, hovering at a great height. The tracks have no sides, and everything here is trying to push you. Balls swing on ropes and huge fans spin around their axis, pulling in everything that is nearby. You need to find the optimal route and the optimal time to move forward in all this madness. Rush is not always the best strategy, sometimes it is better to wait for the right moment.

You need to be among the first players to reach the finish line to proceed to the next stage. If you have not made it in time – well, try another match, but here your path is over. If you do, get ready for the next race, followed by even fewer players. The rules in Run Guys are simple, but cruel: one mistake and you are out of the fight. At the same time, if you fell into the abyss, this does not mean that the game is over for you. You will be reborn a little further away to try again. The only problem is that such falls take up precious time and this can become critical.

In general, it may seem that the game is for children. Such thoughts have the right to exist due to appearance of the game and its mechanics. However, as soon as you download Run Guys: Knockout Royale and play a little, it becomes clear that everything is grown-up here. Players fight for victory no less fiercely than in shooters. It is especially noticeable in the later stages, when there are fewer competitors.

Customize and upgrade your hero

You will receive coins for successful matches that you can spend on obtaining skills. Get skills randomly from among the existing ones. For example, one of the first to drop an increase in speed by 2 percent. You can say that it is a small thing, but sometimes the little things are important too! Each new skill will cost more than the previous one, so you have to try a lot for a full pumping. You can also open chests and get new skins in Run Guys. Chests are available for watching ads and for crystals. However, it is not necessary to use this feature. 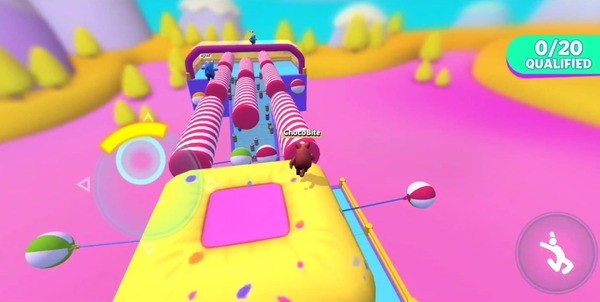 Bright and colorful graphics have also become a distinctive feature of Run Guys: Knockout Royale. The characters here resemble a kind of variation of Teletubbies. It is not clear who is who, but everyone are fluffy and funny. The heroes move accordingly: they are not dexterous and fast. Heroes constantly squeak and their animation can make you feel touched. However, if you seriously want to win, then perhaps your opponents will not seem cute to you.

By downloading and installing the presented mod, you will be able to receive free stuff without watching ads. In addition, the mod also provides unlimited damage.

Just launch Run Guys: Knockout Royale and click on the round button in upper left corner of the screen. There you need to activate the corresponding slider to enable high damage. You can turn it off at any time during the game. By the way, mod disables ads in the game by default. Otherwise, no additional actions are required from players.

You will definitely have to struggle with physics during the gameplay. You cannot control your hero in flight, so you should jump with caution. His inertia is also quite large – it will not be possible to stop instantly. Such an approach opens up space for battles: many simply push opponents down, waiting for the right moment. It is a rather dangerous tactic, because you can fall yourself. If successful, the winner gets a considerable advantage, getting rid of the competitor.

Run Guys’ gameplay comes down to understandable scheme. We have thirty characters starting the race. Each match consists of five tracks and game eliminates several opponents after each race. Therefore, you should always try to be among the first, pushing everyone away. The track platforms are in the air and all the obstacles strive to push you. As soon as your opponent watches you on an error, you fly down, leaving the race. It will take a long time before a beginner gets used to it and can start winning consistently.

Run Guys: Knockout Royale is an interesting arcade game, which gameplay focuses on competition. We can recommend the game for both adults and children.