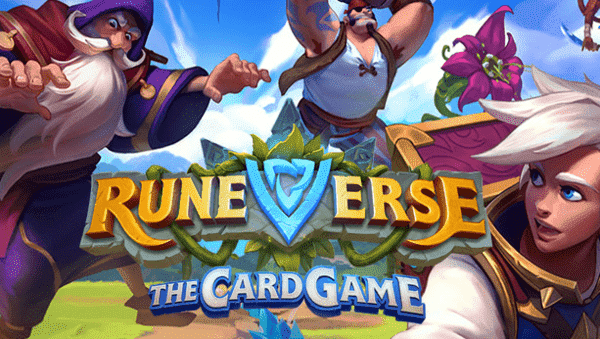 Runeverse – The Card Game is one of the most popular online card games. Runeverse is also available in browser form, but Freakinware Games has decided to release the famous virtual card game on Android platform so that smartphone users could play it on devices anywhere in the world. Just collect and use ordinary cards to fight for victory in a multiplayer fantasy game. However, each of them has its own purpose and action. Every card has a text written on it, which reveals its special abilities that you can use in battle. The main goal here is to avoid disappearance of all life hearts and defeat enemy in all proposed battles. If you prefer strategies and logical thinking then feel free to try ROBLOX and Oh God.

Runeverse – The Card Game ranks the top of the best games in Card section. More than five thousand Play Store users managed to install the game and rated it at 3.9 points.

There are six possible factions in Runeverse – The Card Game. At the beginning of your fighter career, you need to choose a class of your future character: elf, orc, etc. In order to participate in battles, you must choose two heroes for participating in battles. 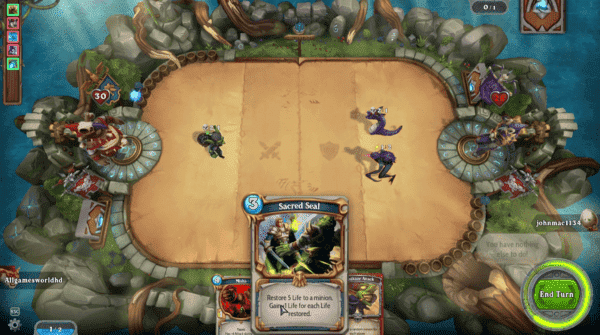 During every battle, player receives a certain number of cards. For the most part, there are three basic selection cards at the start. You can easily change them within the first fifteen seconds and then transfer to arena where the battle will take place. Throughout the game, you can face a shortage of cards, but if karma allows, you can get rare collections with exceptional powers that will come in handy during fights.

Each of the cards takes away a certain number of moves. The more moves you take during you turn the fewer of them remains for the next one. Nevertheless, each card indicates required number of moves, so you can think logically to create the desired strategy.

Not all cards have direct abilities according to their description. Moreover, you even cannot find all information on the virtual card. Just by using card in battle, you can find out its full set of funny and sometimes unexpected effects.

Many games have paid content that harms rather than helps to earn it, because such features only push players away. Altenatively, Runeverse – The Card Game allows you to collect a large deck of the most legendary cards the very beginning, participating in quests and battles.

Graphics of Runeverse – The Card Game cannot but rejoice: colorful characters, epic battles and, most importantly, design of cards. Picture in cell of each card corresponds to description its action. In general, game features a simple style with all details concentrated directly on card deck, main menu design and character skills. 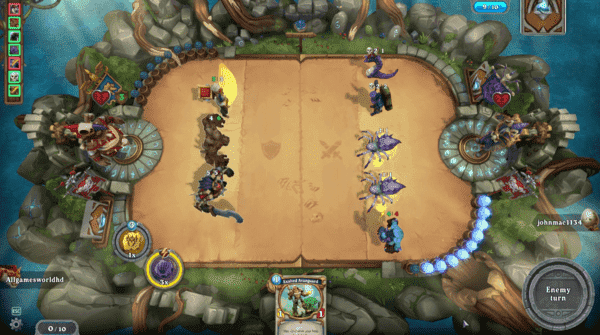 Project has pleasant music in serious fighting style, which meets gamer both in main menu and during the battle. Each action of the summoned creatures has own sound, along with attack of heroes. When you press the buttons, it is also possible to hear corresponding sound.

Runeverse – The Card Game does not require payment for content, as there is no currency, which would be difficult to earn during the gameplay process. However, we can offer you interesting solution if form of a mod that allows destroying enemy in just one hit. It is convenient when fighting strong enemies or in cases where there are only 1-5 points left until the death of you opponent. Now, you can easily deal with every enemy and get high-quality victory with many new experiences.

We have tested Runeverse – The Card Game and its mod to confirm overall performance. One hit kill feature works great! Now you can easily destroy your opponents using such an advantage. By the way, easy wins can bring you with powerful rewards. Therefore, you can make your squad almost invincible. Just follow our instructions below and download our solution to enjoy more varied gameplay process.

Runeverse – The Card Game begins with mandatory registration using the mail and nickname of player. After its completion, you can get access to the main menu and choose the preferred mode: online game or playing with bots. Throughout the battle, you need to decrease opponent’s health (shown in game as red hearts) depending on the damage used. From the very beginning, you have three main cards at your disposal that you ca use as replacement options chosen at random. By starting the battle, you need to make a move within one minute using available cards in the deck. Sometimes player receives cards throughout the battle.

Battle takes place using the tactics of protagonist: you need to choose positions, necessary participants in battle and tactical movements from defense to attack zone. The game as a whole depends on logical thinking of the player and his further actions, tactics and attack techniques.

Runeverse – The Card Game is an easy and interesting game in which the player can feel like a real strategist. Having found your unique technique, you can easily defeat any enemy and open new legendary cards. There is only one thing left – download the game and choose one of the clans, which strength can lead you to victory.

How to Install Runeverse – The Card Game Mod?

Don’t forget to delete original Runeverse – The Card Game before installing our modified version to prevent errors during installation process.