Rush Rally 3 will surely appeal to those who appreciate good car races with high-quality graphics and physical components. The third part pleases the player with improved graphics, updated tracks and an even wider selection of real-life cars. Take part in single player rally races and build your career as a professional racer. Get ahead of your rivals on difficult tracks and listen to the navigator’s instructions to achieve victory. It is not easy to become the first, so for this, improve your car and squeeze out the best result from it on the next race. The game also provides a cooperative mode for a feeling of excitement from the competition with real players. For racing lovers, we also recommend downloading WipeOut Rush and Street Racing HD.

Rush Rally 3 is a continuation of a series of games about speed competition behind the wheel of specific cars. The release to gaming platforms took place on March 28, 2019. Brown monster Limited projects are in great demand among users, so the application quickly gained popularity. Today, thousands of players around the world have downloaded this application to their mobile devices. The average score is 4.6 points, which is an outstanding result for projects of this genre. 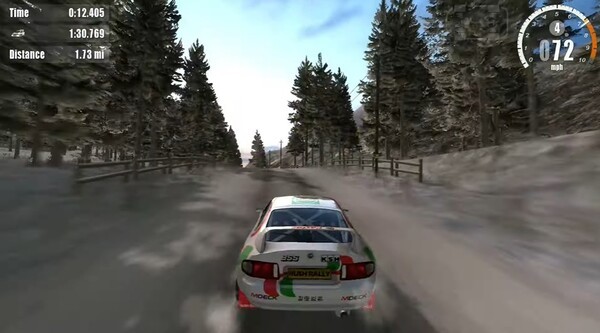 A completely different type of racing

The gaming space provides an opportunity to fight not with gamers or computer intelligence, but with nature and incredible tracks. It depends only on the skill of the user whether the car will be able to complete all the necessary turns and go along a difficult route. Rush Rally 3 takes gamers to realistic roads in an exciting driving atmosphere. Here you will not be able to crash into a building at high speed, get back on the road and defeat your rivals. The slightest mistake – and your character will be in the abyss or just out after colliding with a tree.

Rush Rally 3 offers players over 70 new stages in which to demonstrate their skills. Race in the rain, snow, night or day, on asphalt and dirt, on gravel or sand. Immediately sit behind the wheel of the car that you liked, and, gaining a breakneck speed, go for victory. Overcome sharp turns, outrun rivals and leave various obstacles behind.

The game contains several modes in addition to career – single race, rally cross, joint passage (multiplayer). Many users have appreciated the “career” mode, which is a real test of the virtual racer. Vivid emotions from the completion of the path push gamers to hone their capabilities and skills. First, you need to choose an “iron horse”, which you need to use to get to the leading position, passing all the existing leagues.

The multiplayer mode deserves special attention, in which you have to fight against real players from all over the world. Developers took the process quite seriously and created a special pool to select players with similar win and lose rates. Thus, you avoid the opportunity to get on a more qualified racer with a pumped up car. Play with equals and try to succeed.

The weak point of the mobile racing simulator is the control. This problem is partially solved in Rush Rally 3. You can customize four different control options. I was pleased with the fact that the game has a perfectly implemented manual transmission, and even gear shifting is not a problem. The best solution is to use a controller, which is available for customization. 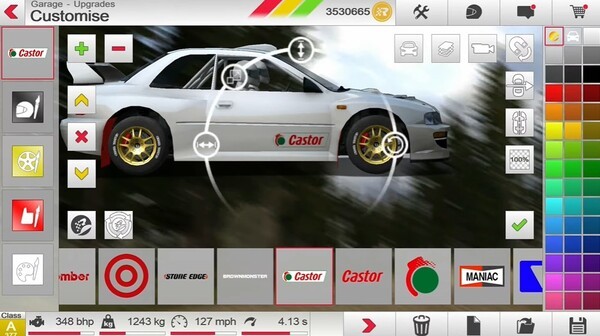 Despite the several difficulty levels in the single player mode, many novice racers will still have a hard time at first. It is not even about the skill of driving, but the correct attitude and characteristics of the cars. The developers have given customization an important role, making it a key constant in the equation for a successful race. Many options for car modernization will simply pass by many users. Nevertheless, the selection of car characteristics will matter even when choosing a track for a race. It will be necessary to provide the car with additional protection from skids In rainy or snowy weather, while sandy tracks will require a lighter structure.

Detailed graphic component and thematic soundtrack create an atmosphere of maximum immersion. Simple control allows you to enjoy the gameplay and have fun in your free time. Rush Rally 3 has 6 types of cameras, everyone can choose the most convenient option for themselves. The physics in the game is at a decent level, the car behaves differently on different road surfaces, and weather conditions affect the car behavior on the track. 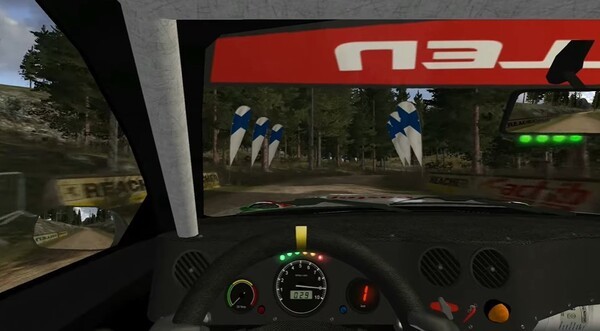 Download Rush Rally 3 Mod APK for unlimited money, which gives the player the opportunity to buy the best car and upgrade it with the coolest parts. Enjoy game walkthrough with only positive emotions. The fact is that the variety of tracks and the growing professionalism of opponents can become a clear obstacle to the championship. Moreover, skill training will not allow you to come first to the finish line, because the main element of progress is upgrading your car. This is where our mod comes in handy, because having enough money allow you to buy necessary parts as soon as possible.

If you are a fan of the NFS or Asphalt series, then most likely this game is not for you. Rush Rally 3 simulator will not allow you to arrive first and immediately. This requires skill and certain knowledge in setting up the car. Here you have to fight for a high result, sometimes repeating the same race dozens of times.