Rush Rally Origins is the fourth installment in the popular rally racing series. As we understood from the title, the game is in some way a return to the origins of the series. Brownmonster authors of previous projects in the series developed it. A classic isometric camera, excellent physics and behavior on the road, dozens of versatile cars, and the coolest tracks are just waiting for you. Go on an off-road journey, fight against opponents for the first place and try not to fly into a rut at the first turn. Improve your skills and go through difficult sections of the road in the shortest possible time. For all racing enthusiasts, we can also offer Race Master 3D and Traffic Tour Classic.

Brownmonster studio has not pleased us with quality projects for a long time, but such a long wait was worth it. Rush Rally Origins is highly praised by critics around the world, giving it a tribute to the professional developers. Read on to find out about all the key benefits of the new game.

The first thing that any racing game can attract is the details of the tracks itself. It is good that there are no problems with this aspect in this project. Several countries are available to choose from (Finland, France, Great Britain and others), different route lengths and variability of weather conditions. Some routes seem easy to race, while others, on the contrary, is a challenge for any rider. It is worth noting that as you progress through the game, you have an available option to upgrade any track to your own taste. If you liked a certain route, but would like to try a ride here in snowy weather, then why not?

Unfortunately, the developers of Rush Rally Origins did not buy the rights to display real cars, so all brands and models are fictitious here. However, this turn of events did not affect the design of the vehicles in any way (one way or another, you can see genuine plagiarism). As with the tracks, cars are unlocked in turn as the game progresses. What’s more, you can also unlock numerous improvements to make your controls more manageable. In addition to the classic power, grip and brakes, five more characteristics are available, reflecting the car’s stability on the road.

Previous parts of the franchise received conflicting reviews about the physical component, but by the third part of the series, all questions were removed. Driving style in Rush Rally Origins is as real as ever. Plausible drifts, dynamic changes in weather conditions, ability to knock down objects, smoke, lumps of dirt and much more are in a hurry to prove it. This project is just an excellent example of the fact that memorizing the required combination of control keys is not enough to enter a turn. Any new attempt depends on the initial driving speed, drift behavior and a few additional factors.

The franchise is famous not only for the cool detailing of the driving process, but also for the use of the isometric camera in the race. In other words, you will be able to look at the car from completely different angles, which changes at every turn. This approach is a real gimmick for all arcade-racing fans. We hasten to assure you – 5 minutes of training and you will be able to navigate in space as well as professionals. However, if difficulties still arise further, the developers have provided for the possibility of changing the camera to the classic one in game settings.

Rush Rally Origins offers players to immerse themselves in two different modes at once: championship and time trial. In the first case, you have to participate in races around the world and compete against racers controlled by artificial intelligence. On average, you face 5 opponents in each race. In the second case, you will be alone on the track. All that is required is to travel the entire route in the specified time to receive the reward. The trails differ in length and weather conditions, so each level requires a different approach.

Rush Rally Origins boasts high-quality graphics. Various routes as well as detailed car models are noteworthy. In addition, the game has been adapted to run at 60 frames per second. Moreover, if your device supports a higher frame rate, then you can change it in the settings up to 120 frames per second. The sound in the game has the highest level. Roar of the engine, sliding on the road and whistle of burnt rubber – technically everything is perfect. A control system designed to work with both touchscreens and game controllers, making races more fun and consistent no matter how you play.

From the very beginning of the game, players have access to only a few cars and one track in the time trial mode. If you do not want to waste time and go through everything from scratch in order to assemble the car of your dream and ride on your own created track, then we recommend you to download our mod. It opens all tracks and car models, making them available at the first start. Thus, you can show a real master class from the very first minutes of the gameplay. 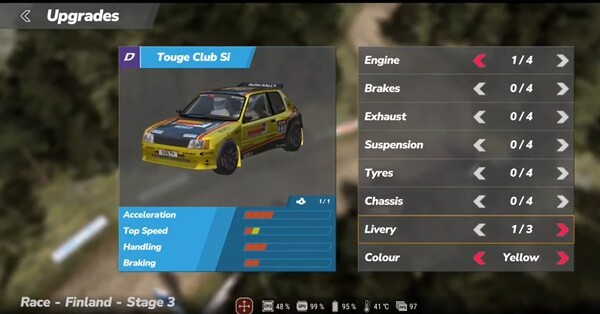 Rush Rally Origins combines classic top-down gameplay from the original Rush Rally with highly acclaimed graphics and physics. Complete dozens of new and unique stages around the world, each with the ability to change the time of day and weather. Drive over many challenging terrain types including snow, gravel, mud and asphalt!

Compete in two game modes and upgrade your car in a timely manner, making it technically perfect. Do not forget that when racing with other riders, you should carefully enter the turn so as not to hook anyone. Any interference with your skid can lead to an accident and loss of position in the overall standings.

If you are into realistic racing, then Rush Rally Origins is undoubtedly for you. In fact, we recommend this game to absolutely everyone, as everyone can find something interesting here. A variety of modes, numerous upgrade options, as well as the ability to customize controls and cameras will help with this.