Sand Balls is a good arcade game with puzzle elements, where you need to remember the school physics course and connect your imagination. The gameplay essence within the project is to dig a tunnel in the ground, collecting a sufficient number of balls along the way. You decide how you will pass the level. The main thing is that the number of balls received is enough to load the car. Avoid obstacles that are difficult to see against a background of solid color. If the balls hit the stone platform, you will no longer be able to get them, because they can only move down. Thanks to three-dimensional graphics, as well as realistic physics of object behavior, you can fully immerse yourself in the gameplay. Even a beginner can understand the application. Download also Toy Blast and Construction Set.

Read on to find out all the details about the app.

Be smart to succeed

The gameplay of Sand Balls focuses on completing of exciting levels. Here you need to dig out the thickness of sand so that the balls could move freely. Each of your actions leads to the disappearance of sand in specified area. You will not be able to return the sand to its original place, so you need to be very careful. The balls obey the law of universal gravitation, so they always fall into the voids that meet on the way. 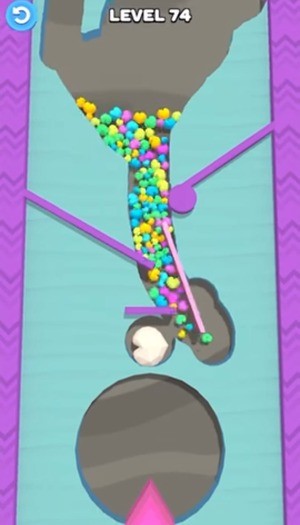 The first stages of campaign will not cause you any difficulties, since you only need to draw a straight line through sand thickness. Subsequent stages contain various obstacles and even traps, which are undesirable for the balls to encounter. You need to bend around both simple stationary blocks and impromptu swings, as well as real traps.

The space filled with sand contains voids, static, rotating, moving in one-plane traps, cavities of various shapes. Voids contain various elements complicating the passage. Inclined, vertical and horizontal partitions, pipes of various diameters, dividers in form of columns placed in a various order, balloons, bombs, etc. Some of voids of Sand Balls contain balls. When they fall into the volume of colored balls, they also become colored, increasing the total amount of cargo. Levels start with one simple notch just above the loading opening.

At the touch of a finger, the load enters the truck bed. As the levels grow, the number and location of balls change, they can lie at several starting points, be located at different elevations. There are combinations of obstacles and objects on the way to the balls that can interfere with the path. They can also help to collect the maximum number of balls.

Take part in mini-games and get additional rewards

Recently, the developers of Sand Balls introduced a mini-game like a gacha. It is necessary to open 3 random chests with total of 9 prize packs offered. You choose which one to open by yourself. Pull out crystals or special prize that you can exchange for resources. In order to open the chests in six stages, it is necessary to collect three keys. Viewing internal advertising brings 3 more keys, increasing the chance of getting valuable prize.

Passing Sand Balls brings experience, which increases the volume of car body and unlocks new cars. The set of experience for changing the transport is visible at the end of the level, reflected as percentage on truck board. In addition, each level provides players with stars and crystals, which are the main game resource. Use in-game currency to buy skins. Change appearance of not only the balls, but also the truck. It is noteworthy that car skins open as you progress through the campaign. Therefore, you can buy cosmetics for the balls at any time. 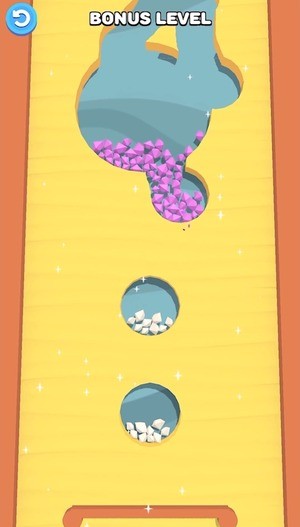 Thanks to three-dimensional graphics, as well as realistic physics of object behavior, you can fully immerse yourself in the gameplay. Even a beginner can understand the application. The sound in the game is pleasant and unobtrusive.

We suggest you to download Sand Balls mod for unlimited coins.

The gameplay of Sand Balls is presented as simple and relaxed, so the application will appeal to all those who do not like to strain too much during the gameplay. All that remains after starting the game is to press the button for start, after which all the levels will go one after the other.

It will be enough to lower a certain number of balls from top to the very bottom to complete the current stage. You can use cursor to make certain channels along which these balls can roll. The truck below will provide its body for transportation. Vehicle stands on a special stand, which descends as it fills, after reaching the required number of balls. 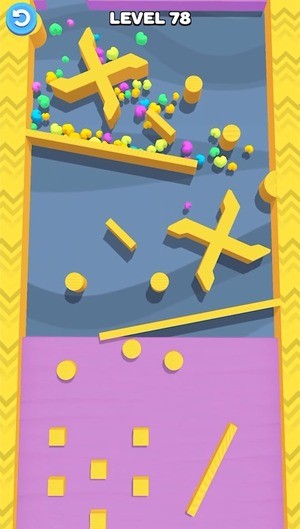 You can also hook other Sand Balls. It is enough to touch at least one filled ball of these blanks, after which they automatically take on a color to control. The more you can load the body, the correspondingly greater will be the reward. In addition to rating points, you will also receive stars. The maximum rating is three stars. If you did not manage to pass all the stages to the maximum score, then you can repeat it at any time.

Sand Balls features different colors of balls. Moreover, balls complementary in color and shape are available for crystals. In total, there are 27 types of balls, ranging from the most ordinary to hollow spheres, interesting in that they have a special inertia of movement. They interact differently from simple balls with other obstacles, rotating elements, objects. Developers modeled a huge number of obstacles: slats, reflectors, rotating screws. There are also burners that burn balls, bombs, funnels, blades that break balls into small fragments and other tricks.

Sand Balls is an excellent puzzle and arcade game at the same time that will appeal to fans of time killers due to simple plot and straightforward controls. There is everything you need for a comfortable game. First, nice graphics and relaxing music. We can surely consider this project as a good anti-stress. In order not to get bored with the gameplay, the developers have prepared a whole bunch of available levels. There are also bonus tasks where you can increase the number of your crystals and spend them on the necessary improvements in the future.