Score! Hero 2023 is a football game with atypical gameplay, which is a direct continuation of the famous first part of the series. Here you have to manage an entire football team, making passes to your partners and scoring goals, but the main goal is to upgrade an individual player. Go from rookie to football star, improving the player’s performance and scoring goals from the most unthinkable positions. Another type of control, ability to play with one hand, good interface, as well as ability to independently build ball trajectory – all this turns a standard football game into a rich battle in which you want to participate again and again. The developers try to make the experience of the game real, completely transferring the stadiums, spectators, players, animation of strikes from real life. By the way, if you are interested in football games, then check out Pitch Clash.

The first part of the project, as well as games like Score! Match and Dream League Soccer 2021 have collected millions of downloads – over 200 million in total! Consider the new creation of the same developers.

Upon entering Score! Hero 2023 you have to create own football player with unique appearance and features. Play throughout the game, passing from season to season, changing different clubs and developing. Do not think that you will only control one football player – you have control over the entire football team. However, it is possible to upgrade only your football player, as the whole game focuses on his career. 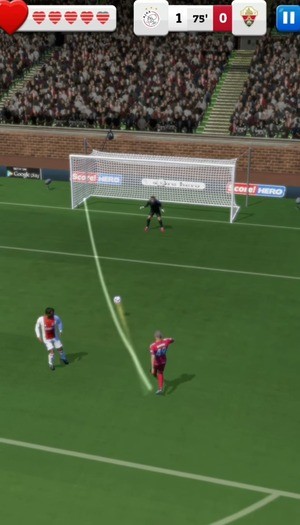 One of the most interesting details of the game is the lack of full control over each player. It would be extremely inconvenient to implement it on Android platform. You do not need to control the character using arrows or other movement methods. It is only necessary to draw the trajectory of blows during transmissions and choose its strength. The player has a choice – to wade through the enemy with small and accurate passes or try to score with one powerful blow. The most difficult thing in the beginning is the choice of trajectory. It is the main feature of Score! Hero 2023, because, unlike typical PES and FIFA games, here you need to draw an attack line yourself. Therefore, the developers not only made the game more complicated, but also made it more interesting.

Many seasons and levels

The whole game includes several seasons, divided into levels. For example, you need to score from a certain position in the first level and pass and score in the second and so on. The options are gradually becoming more versatile, while the opponents are more intelligent. It is no longer possible to give a pass in front of the opponent’s nose and score into the bottom corner right next to the goalkeeper. Here, tactics come in handy along with ability to slide your finger across the display correctly and even knowledge of football. In any case, the levels in Score! Hero 2022 are interesting and make you constantly think with your head, gain skills and stuff like that. In addition, there is something like a storyline, which is also pleasing.

Differences from the first part

Although the first part gained many awards, the developers added several innovations to the second part of the franchise. First, the improved graphics are striking, as well as more simulated situations on the football field. Realistic footballer animations remind from real players, so the app will amaze you with its authenticity. Creators also added endless mode and increased the number of officially licensed teams from around the world. Now there are over ninety. 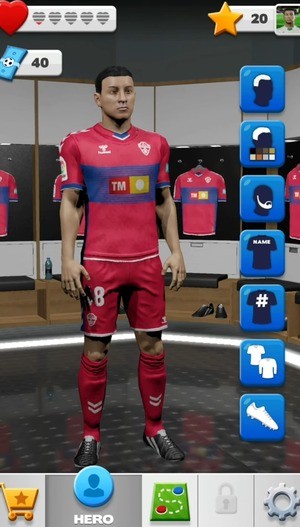 Score! Hero 2023 features stunning graphics, carefully crafted tournament rules, great sound and convenient multiplayer. It is a great example of how good graphics and a competent approach can create an interesting and high-quality project.

Score! Hero 2023 is free to play, however in-game payment system allows players to buy currency and energy for matches. It is possible to replay a dangerous moment, using energy. Player needs to upgrade his player and customize him. All this requires money, so we suggest you to download a mod for unlimited amount of money on your account.

You start Score! Hero 2023 career in a weak club, but you soon you will get noticed by giants of the sports industry. Get into a strong team, but for this you need to show that you are worthy to play there. Your main task is to win cups, trophies, receive various awards, overcome difficulties and find lucrative offers. You cannot do all this just like that – it takes weeks of training for the leading clubs to notice your skill and want you. 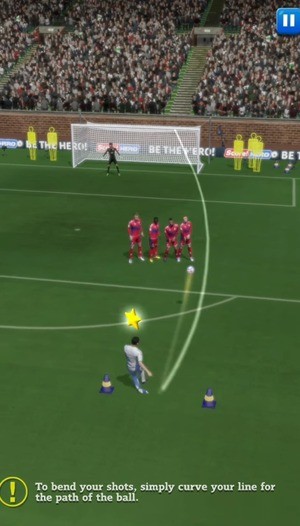 Countries and football fields, emblems and sponsors change, but every club wants to have a player with such skill at its disposal. Money is not a problem, and now you have the opportunity to choose famous clubs and large advertising contracts from companies on your own. The path of a football player is difficult, but you have talent. It remains only to dispose of it correctly and become the most successful player in the world.

Another interesting game feature is time dilation. You have approximately five seconds to react after each pass. During these five seconds, it is necessary to choose trajectory of the ball, as well as its strength. This feature was in the original, but now the developers have slightly modified it.

Score! Hero 2023 is a worthy sequel to the first part of the game. It has the same meaning, but better graphics, more teams, new modes and a lot of fun.