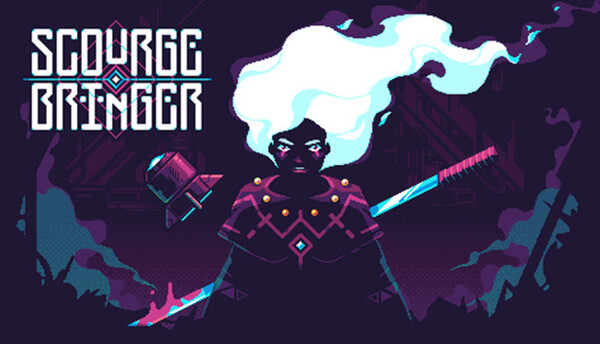 ScourgeBringer is a fast-paced retro rogue lite platformer where players take on the role of the ruthless warrior of the Kyhra clan. If you expect the gameplay to be the equivalent of a regular walk in the park, be careful, because this project turned out to be very difficult. The game centers around Kyhra, a young hero who has to uncover the secrets of the Creepy monolith that threatens to destroy her world. Use Blast.32 robot companion to explore an endless and ever-changing dungeon to reach her goal. Blaze her way through waves of demonic enemies, giant bosses, mechanical threats and more. If you are interested in complex games, you can also download Abandon Ship.

Read our review for a more detailed acquaintance with the game. 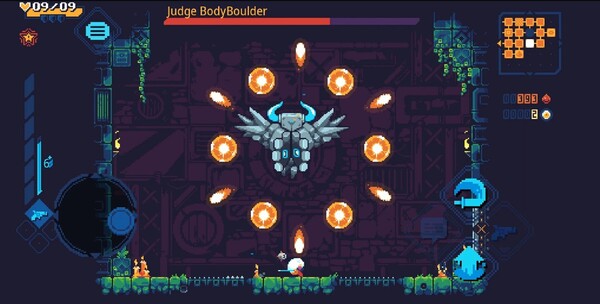 An alien something called ScourgeBringer attacked the game universe. He turned cities into ruins, killed almost all living things and continues to move until he destroys everything. Many residents tried to explore it from the inside, but none of them returned.

For some reason, the strongest of all people turned out to be the main character Kyhra – she got a sword and a personal assistant robot to go to defeat the monster. This project is not a story game, and therefore not too much attention is paid to history here. A dozen and a half notes left by the missing researchers and small dialogues when you first meet the characters – these are almost all the narrative elements.

One of the buttons is responsible for the jerk – the heroine rushes to the nearest enemy and inflicts damage on him. You can combine it with a double jump, as well as move through the air in jerks without touching the ground. When another button is pressed, Kyhra hits, and on the third it makes a strong attack.

Enemies warn of intentions before the shot – if an exclamation mark appears above them, then bullets will fly in your direction after a moment. You can temporarily stun them with a strong attack. The hero also has a firearm, which charges quickly run out and take a long time to replenish.

As with other games in this genre, you gain new passive skills as you progress through ScourgeBringer. Encounter altars of blood that grant all sorts of blessings. They can increase maximum health, increase the chance of finding a quality item and reduce damage taken for each lost “life”. Main bonuses are unlocked in the skill tree, to which the hero travels in case of death. Buy skills that can completely change the approach to battles for the collected blood of bosses.

First, you increase the maximum health – you will not last long here without this. Then you open the combo counter. The more diverse the techniques used, the more money you earn to buy items from merchants. Unlock Wrath ability, which destroys all enemy projectiles on the screen with a single tap. Increase the stun time, increase the powerful blow so that it throws enemies against the wall and deals additional damage. In general, this is not a complete list of all abilities.

If you get tired of constantly dying, you can download a special ScourgeBringer mod APK, in which you can activate immortality.

Fights in ScourgeBringer take place in small rooms, so there is simply no time to stand still. You constantly make jerks and jump from one enemy to another. Watch out for enemies who can start shooting at any moment. True, the need to clear almost every room twice seems superfluous. As soon as you kill the first pack of opponents, a dozen more will appear on the screen instead of them.

Another disadvantage is related to upgrades, which are either dropped by defeated enemies or sold from merchants. It is almost impossible to feel its impact on the gameplay. If you get an item that increases damage against stunned enemies by 7%, this seems to be a useful thing. In reality, the fights do not become even a little shorter. Even if three such items are equipped, the result will not be noticeable. 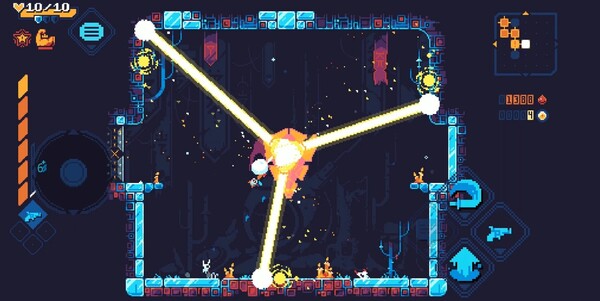 This is probably why ScourgeBringer lacks its own unique ideas so much. Increased difficulty is one of the few features that sets the new game apart from its competitors, but comes down to the need to run through the rooms twice and temporary improvements that do not change the gameplay much.

ScourgeBringer is a well-made and good-looking game. It has an excellent combat system and an interesting skill tree, but quite a few original ideas.