Shadow Fight 2 is an entertaining fighting game with RPG elements from the developers of NEKKI. The forces of evil don’t sleep, and you need to go on the warpath again to defeat all enemies and close the gates of shadows forever. Your main task is to win all battles and restore peace and order on earth. It won’t be easy to do this, since numerous squads of killer souls will come out against you, and after each act you will have a battle with an epic boss.

Embark on a dangerous journey where you will meet many souls of past warriors and their patrons on your way. Use a variety of attacks, learn combinations, but also don’t forget about powerful weapons and even magic. Hit, cut, burn, but get to the bitter end and close the way for the demons to the world of people.

More than 100 million users have already installed Shadow Fight 2 on their Android devices. Find out why the game attracts people so much by reading our detailed description.

If you love fighting games, then you will surely like Shadow Fight 2, because here the most important part of any fighting game for Android is worked out in detail – the fight process itself. All battles are very dynamic, you and your opponent are extremely mobile, but at the same time, the game runs smoothly due to high-quality optimization. Dodge enemy attacks and seize the moment to deliver a crushing blow. Use jumping for a powerful downward attack or dodge a kick. Feel free to use combo strikes, which we’ll talk about in more detail below. 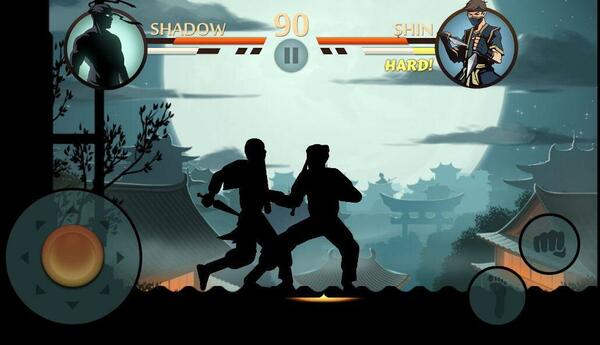 Shadow Fight 2 has six locations and each of them has more than twenty levels. Thus, in total, you have to defeat more than 120 opponents on the way to your main goal. However, you cannot move to the next province until you clear the previous one.

At the end of each world, you will face a battle with the formidable demons leader. There are six such bosses in the game, each of them behaves differently in battle and has different skills, so you won’t be able to go through all of them, just holding them in a corner and beating them. Everyone needs to find own approach by applying a specific strategy.

Equip your hero with the best weapons and armor

If you thought that you would have to play the whole game with bare hands, then you were wrong. The developers of Shadow Fight 2 offer the gamer a choice of a large arsenal of weapons to deal with enemies easier and faster. Arm yourself with brass knuckles, sword, club, dagger, spear or samurai katana and attack the enemy. You will open weapons as you progress through the story campaign. The game also has armor: helmets, breastplates, shoulder pads. They increase your defense and allow you to hold out longer during the fight.

Use the epic magic

Magic becomes available to you after passing the second boss. Learn various spells of different elements and hit enemies from a distance. Take a fireball and incinerate an opponent, or use a toxic cloud to poison the enemy. There are more than 20 types of spells in Shadow Fight 2, so you will surely find something suitable for yourself.

In order to diversify the gameplay as much as possible, the developers of Shadow Fight 2 have introduced an interesting system for pumping your combinational attacks. Initially, only a regular punch and kick is available to you, but new combinations open up as you progress. You need to remember and perform several consecutive actions during the battle. For example, for a roundhouse kick, you need to jump up and press the kick button several times in a row, and so on. Techniques become available during the walkthrough. 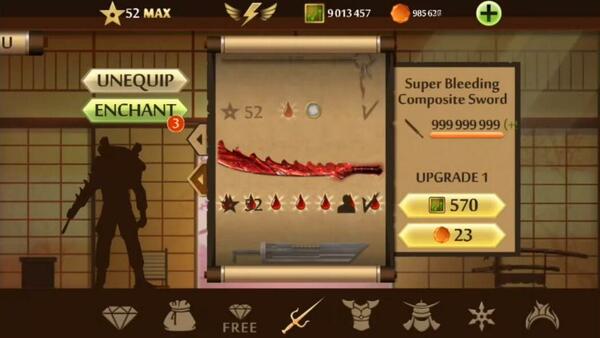 Shadow Fight 2 very well drawn and designed, which you can see on your own immediately after the first launch. The game’s characters are shadows fighting against the backdrop of authentic Asian landscapes. The sound in the game is powerful and clearly conveys what is happening on the screen. The sounds of blows, swings of sharp weapons, magic – the developers implemented it so precisely to take you directly to the battlefield.

By downloading a modified version of the game, you receive endless money and crystals, for which you can buy weapons, armor, learn magic and upgrade skills. In addition, an important aspect of Shadow Fight 2 is energy. It usually ends constantly, which is why you have to wait a while to replenish it, otherwise you won’t be able to fight. This problem disappears with our mod, because now the energy is also infinite.

We played Shadow Fight 2 for you to give our verdict. We guarantee that the mod works and it is completely safe. Just install the modified version of the game and enjoy all the benefits.

The controls in the game are smooth and simple. With one hand, you control the movements of your hero, and with the other, you carry out punches and kicks, as well as jump. 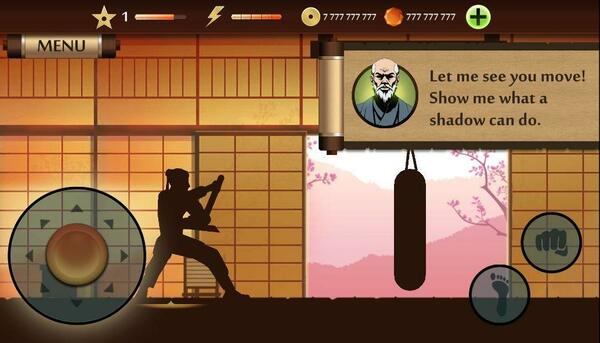 The game also has a hero pumping – the higher his level, the more opportunities open to you. However, you won’t be able to immediately learn all the perks and put on the best armor, since many of them require defeating one or another boss located at the end of the chapter.

When you start a fight, you have a few seconds to prepare. All opponents in the game are strong and sometimes cunning, so the battles will definitely not be boring. Some blows can knock out the enemy’s weapon, which greatly weakens the opponent’s damage. As for the bosses, they close every location. Start with Lynx, followed by Hermit, Butcher, Wasp and Widow, as well as the main villain of the game.

Shadow Fight 2 is a great fighting game to have fun. Thanks to a flexible upgrading system and a large selection of weapons and magic, you won’t get bored for a minute during the playing. This game focuses on the single player campaign, but if you love online battles, then check out Shadow Fight Arena in the same game universe.

How to install Shadow Fight 2 Mod?

Don’t forget to delete the original version of Shadow Fight 2 before installing our modified version to prevent errors during installation process.