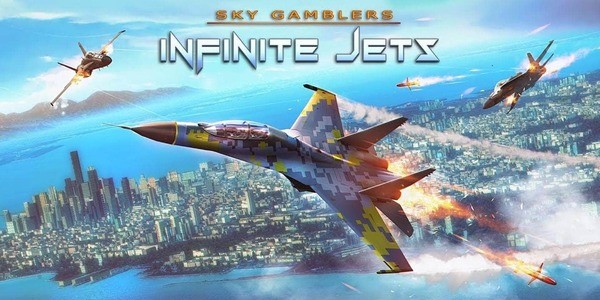 Sky Gamblers: Infinite Jets is the continuation of the series in which air battles on jet fighters await you. Piloting a large fighter is not an easy profession and when you need to protect civilians from danger, you get down to business. The more professional the pilot is, the more difficult missions are in his record of accomplishment. You are just such a pilot, so sit at the helm and save the world, completing numerous tasks in a single company with a scenario. Alternatively, arrange intense air battles to the last survivor, gathering in teams of 7 to 7. Masterfully dodge enemy missiles and blow up enemy planes with precise hits. Get points, customize your aircraft, making it different from the others with the help of camouflage and painting, as well as unlock new weapons and upgrade engines. The app includes over 100 planes. Don’t forget to also download Demolition Derby 3 and Survival and Craft: Crafting In The Ocean.

The Sky Gamblers series has been delighting fans with its quality games for about ten years. Infinite Jets was no exception.

The action of Sky Gamblers series takes place during the First and Second World War, but Infinite Jets events unfold today. According to the plot, Sky Gamblers squadron exercises in San Francisco, but one of the admirals turned out to be a traitor and enemies attacked our pilots. Participate in a story of revenge, in which you need to chase the admiral and his army of villains. The storyline campaign itself is small, only 14 stages. At the same time, the missions turned out to be quite diverse and exciting. In some missions, you need to sink submarines, in others – to escort bombers. You even have to deal with ground anti-aircraft forces with cunning.

Sky Gamblers: Infinite Jets has eight multiplayer modes: Team and Solo Deathmatch, Base Defense, Capture the Flag and Survival. If you do not want to fight with other players or want to practice, there is an opportunity to create your own game with artificial intelligence with the same modes. Live opponents will not let you get bored and finding a suitable battle is easier than ever. The highlight of the project is the large-scale 7 vs 7 battles.

Over a hundred aircrafts

Sky Gamblers: Infinite Jets features 100 aircraft models and each has the same name and historical prototype. In the story mode, you can fly on planes that are the most popular in our time, as well as aircrafts of the recent past. Try fighters, bombers and various hybrid modifications. Such legends as Yak-9, Il-2 and Mitsubishi A6M Zero are in place. All jets are subdivided into five groups. Get new equipment for experience and accumulated money. There are various options for combat load for many aircraft – cannons, missiles, bombs and various colors. Purchase additional customization kits and instant unlock all planes separately

However, it will not be easy for you! Air defense systems, enemy fighters or ocean battleships, here difficulties await at every turn. Only perfected skills, sharp evasive maneuvers and artificial intelligence help during aiming will help to destroy enemies and emerge victorious from any battle in the sky.

If we talk about the graphics of Sky Gamblers: Infinite Jets, then it has an excellent level. Lighting, streams of smoke, splashing water pleasantly create a realistic atmosphere. Developers greatly worked out several locations available in the game. It is nice to study them. Customization also pleases with variety. You can upgrade technical characteristics, take different weapon options, and it is interesting to decorate the appearance of aircraft. As for the sound, it will not disappoint you either.

Sky Gamblers: Infinite Jets is a paid game in official sources. Its purchase costs the user $ 4.5. However, you can use the presented article and download the application free. In addition, the game has a mod for unlimited money. Get more income as you spend.

Climb into the cockpit and get ready to take off in Sky Gamblers: Infinite Jets. Unlock, upgrade and customize weapons and defense systems of over a hundred aircraft. Color your favorite fighter plane, change camouflage and badges to create the perfect plane. Conquer the skies! Learn the story of great courage and hideous betrayal in the single player campaign. Consider it won’t be easy. Get access to huge open maps of detailed recreated cities, such as San Francisco and Rio de Janeiro, where danger lurks at every turn.

The main weapons in the game are various machine gun options. They have impressive destructive power. Combined with the local advanced damage system, this creates the effect that you unleash a barrage of spears rather than bullets on enemies. Some aircraft are equipped with missiles and bombs, but the implementation of the action of explosive shells has a simpler level. Management in the application is flexible. You can use the default accelerometer or resort to the directional pedals. The simulator mode is also present.

Sky Gamblers: Infinite Jets is another great part of the famous series of air battles games. If you are a fan of such projects, then you can be sure – this game will not disappoint you.