The developers from Wildlife Studios, known for such games, as Zooba and Suspects, recently presented unique shooter – Sky Warriors: Blazing Clouds. This combat game gives the user the opportunity to feel like a pilot of a real fighter plane. In addition, project belongs to the simulator genre. Air battles take place at any time of the day in various weather conditions, and most importantly, with players from completely different countries. There are several modes and completely different missions that player needs to complete throughout the round.

Sky Warriors: Blazing Clouds hit the Play Store in the summer of 2021. Therefore, the app has not yet received an average grade point. However, the flight simulator made a splash among fans of war games.

Sky Warriors: Blazing Clouds allows you to control a fighter jet at a distance of more than three kilometers from the ground. Fly over the ocean and see only lonely islands below. Most often, you can find the enemy base surrounded by a protective field on the game map. 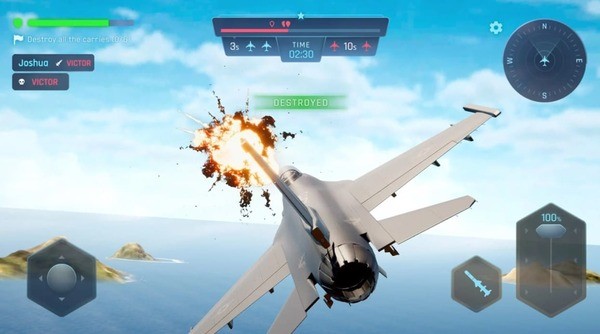 Visit your garage and purchase a new plane or improve the vehicle used. There are Improvement and Store tabs for this. Any improvement for a fighter costs player a round sum, so it is worth saving up funds in advance.

After training, player gets access to a number of unique modes for playing the flight simulator. They all take place online, so you need a stable Internet connection. There are both specialized missions, single player games, 3v3 modes and much more.

Each combat round is a specific mission that requires special attention. Most often, such tasks are associated with the destruction of enemy base, elimination of certain fighters or protection of selected aircraft.

After the end of the round, the player has access to the rating of all participants in the battle. Criteria such as the number of fighters eliminated, bases destroyed and the number of damaged aircrafts are available here. Each of the criteria affects the position of player in the top leaders along with financial position and pilot rating. 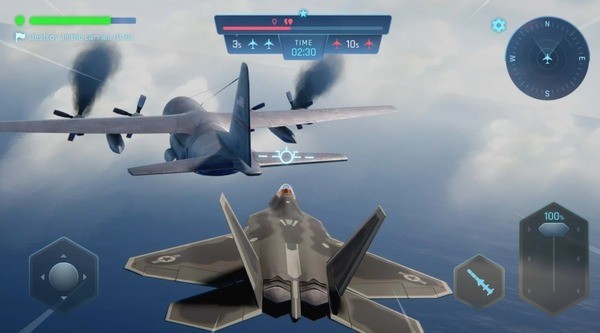 Sky Warriors: Blazing Clouds has simple and not detailed graphics. You will not see beauty of the islands, but graphic solution makes the game more realistic. After all, the nature of the islands is not as important to the pilot as the state of military affairs. Most fighters are similar in appearance. However, all jets differ in structure and design.

As musical accompaniment, you can hear an unobtrusive electronic melody that sounds in the garage and the main menu. There is no music during the battle and you can hear fighting, attacks and launch of missiles.

Fighter plane control is a tough task for any player. Most often, you play on the same map with a dozen different players from all over the world, so the pilot is constantly at risk. One wrong move and the fighter will simply crash on the rocks. Constant deviations from the course to avoid defeat often spoil the overall picture of the game. However, we offer an opportunity to avoid such a plot by installing Sky Warriors: Blazing Clouds with a built-in mod that allows the pilot to use god mode and not fear for the fighter condition.

Launch Sky Warriors: Blazing Clouds and find yourself in the tutorial mode, where you will learn about the details of controlling a real combat fighter. There is a possibility to choose a standard or inverted control favorite by many. Next, the new pilot has to learn how to attack targets. The fighter itself is located in the main menu of the game. There are tabs where you can find information about pilot titles, position in the leaderboard, amount of fuel in the tank and information about the league. 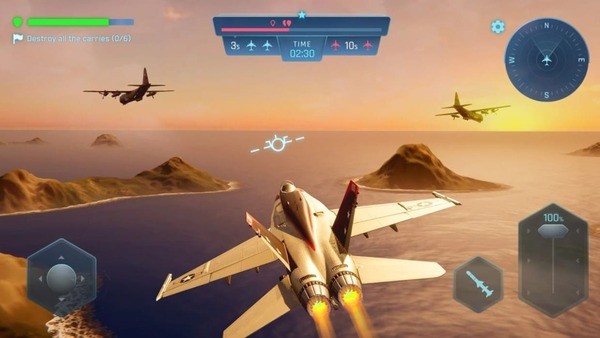 You can change the air vehicle or improve the existing one in the garage. After careful preparation of the fighter plane, the player needs to turn to the “Battle” button, where you can select the mode of the new mission. We recommend choosing the best missiles, REPs and upgrades for better missions before the battle.

Sky Warriors: Blazing Clouds is a great opportunity for players to feel like real fighter pilots. Various maps, new vehicles and a unique selection of players make the game interesting and exciting. Moreover, the flight simulator supports different improvements, upgrades, and rise in the top leaders.