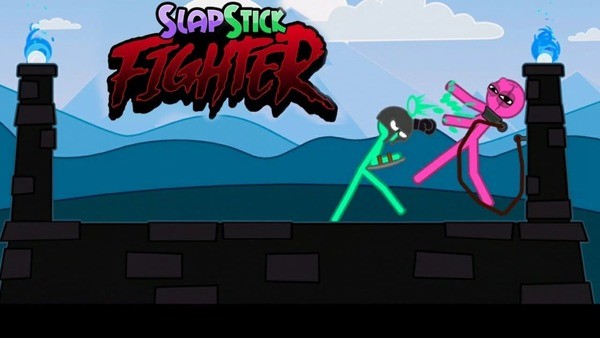 Slapstick Fighter is a spectacular fighting game from the developers of Cybernate Pty Ltd, where you have to fight as a character called a stickman. The fighter confronts his enemy in the arena and you need to lead him to victory. Add also excellent physics of movements, as well as very nice graphics. Usually, developers have to include considerable abilities for a successful fighting game, because you can only lay down the enemy in time using a suitable technique. You don’t need to be a connoisseur of the fighting world in Slapstick Fighter, because everything is much simpler here. You will be able to quickly figure out all the nuances of the gameplay and then proceed to the unhindered destruction of all your opponents. Download also Stickman Shinobi: Ninja Fighting and Anger of Stick 5.

The fighting game Slapstick Fighter has become so popular that more than 5,000,000 Play Market users have downloaded it on their devices, as well as given very high ratings.

As part of the local gameplay, you have to go through various levels that offer you the most incredible scenarios. The main goal of each stage is to inflict fatal blows on the enemy. You will have to knock out your opponent five times. It is easy to guess that you also have five conditional lives in stock, after which you need to start the level again. To deliver such a powerful blow, it is necessary to hit your opponent in the head. Fortunately, almost all of your attacks target the enemy’s head by default. It should be borne in mind that opponents will definitely block your attacks if they are too predictable.

Use weapons and environmental items

In some cases, your character can use guns, so the fighting style will change noticeably. Strikes with the same knife have a much higher chance of inflicting critical damage. Along with the weapon, you will also encounter various elements of armor, including a shock-resistant mask. In most cases, various objects of the environment can become your true friends. You can easily hit the block, but the force of the blow will throw the enemy back onto some spikes, definitely knocking him out. Please note that the same situation can happen with your hero.

Slapstick Fighter is sure to offer you different sub-modes. Although campaign looks like a clear sequence of levels, but the battle patterns regularly change, offering you all the new scenarios. For example, at some levels you have to control a brigade of fighters at once, who will copy each other’s movements. Such a detachment can cause serious damage to the enemy, but the inconvenience in controls can make you an easy target for skillful bots. Often you will come across bosses, which defeat requires tactics. Typically, bosses have health points and even boast protective masks that can withstand a range of hits. We need to say right away that earnings depend on quality of your passage. However, you can always return to the passed level using a convenient menu.

Slapstick Fighter offers vibrant graphics with beautiful locations. In addition, the application features unusual animation. It is possible to customize your character using various accessories from the internal store.

To improve the properties of the hero, you need in-game currency. You can download our Slapstick Fighter mod APK to fix this problem. It also removes all ads from the project.

After the first launch of Slapstick Fighter, you find yourself in the dojo – place where people practice martial arts. Here you will learn how to move the character correctly, how to attack and dodge. All combat actions look very realistic thanks to the physics carefully designed by the creators. Then you get to the main screen. First, you need to choose whether you will go through a campaign where you need to fight bots or immediately start calling another player on the tatami. There is a section where you can see all the available levels, as well as the “Play” button itself, which allows you to start your first battle.

There is a button in the form of T-shirt on left side of the screen, clicking on it takes you to the dressing room, where you can customize the appearance of your character. Change his skin color, belt, eyes and decorate his face with scars or other features. The only drawback of the store is that it is impossible to try on the item before buying. This can make you upset that it does not look the way you would like it to. Most of the items require gold coins to purchase, however some of them are available only for watching a short promotional video.

So what happens after you hit Play in Slapstick Fighter? A battle begins, and it is quite dangerous, so you have to try hard. Hit quickly and accurately to defeat your opponent. Perform a series of blows, knocking your opponent to the ground. The difficulty only grows with each level, so get stronger as soon as possible. Everything constantly changes, including opponents, locations and weapons used.

After successfully completing the level, the player receives stars. The more there are, the higher the result. In addition, another reward depends on number – coins. Earn coins only on bonus levels, where there is no enemy at all, but only a doll stuffed with gold.

If you are tired of usual fighting games, then we suggest you have some fun by downloading Slapstick Fighter. Control an unusual puppet character with very funny physics. Enjoy how your opponents fly in a funny way. No plot, no pumping, no complex gameplay elements, just fun.