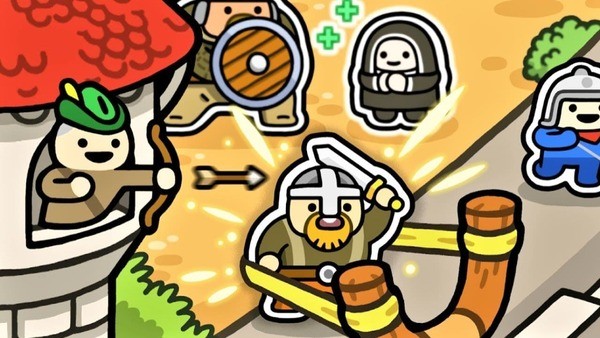 Action games are one of the popular on the Play Store for a long time. Many games of this genre are rapidly reaching the top, as is Smash Kingdom: Slingshot Action Defense. Despite recent release, many users of Android platform have already appreciated the game. The plot takes place in a distant kingdom, which suffers from attacks of various monsters emerging from magical portal. It is located near the walls of great fortress, where the main character has to conduct hostilities. However, they are not at all associated with fierce attacks and traps. Main weapon of the game is a giant slingshot designed to transport fighters directly to the battlefield. We have also prepared for you Knight War 2: Idle Defense and Modern Warships: Sea Battle Online.

Smash Kingdom has become a real hit among fans of fun and strategy. Main hero has to defend the kingdom and achieve victory over the angry monsters. The game has over ten thousand downloads. More than six hundred Play Store users rated the strategy at 4.6 points. Many reviews point out the game unique mechanism, which comes down to the maps needed to transport heroes to the field.

The main goal is to collect packets of card decks. Each of the decks contains both monetary resources and new unique heroes. In turn, every card contains information about the character. You can learn also about damage values here.  Some cards relate to items that help in warfare: bombs, cannons and dynamites. Each tool or character in the game is unique, so before starting a battle, you should stock up on specific information about each of them. 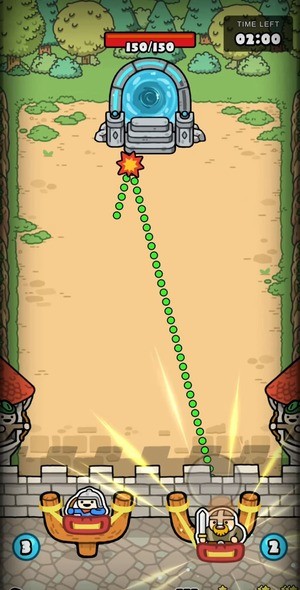 Smash Kingdom is a game that is completely different from other strategies. In order to bring attacker to the battlefield, you must use a special slingshot. This mechanism is similar to popular game Angry Birds, but here you can watch the battle action from top view camera. The slingshot is key feature of the game, which makes it interesting and, in a sense, even funny.

Outwardly, Smash Kingdom: Slingshot Action Defense is very similar to legendary strategy Clash Royale. This applies not only to the main menu, but also to the mechanism for improving the main characters. You need to collect individual cards from the deck, which later serve as resources for improving certain characters. After collecting a certain amount, which starts from three and ends with a whole hundred resource cards, you will be able to improve the hero. Therefore, players can upgrade royal army and defeat opponents.

Every second various monsters come out from the portal, which is located near the kingdom. Most of them are skeletons and slugs, but the heroes of royal army can meet other villains: goblins, bats and skeletons of higher rank.

The game has minimalistic graphics. Many heroes are presented in a completely simple way: not detailed facial features, simple clothes and rapid movement across the battlefield. In general, the game has its own special palette filled with the brightest colors. 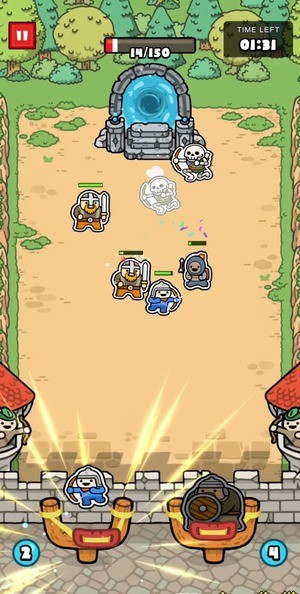 As a musical accompaniment, the player can hear music in the main menu of Smash Kingdom that is calm and pleasant to play. However, during the battle the music takes on a more serious character. In addition, it is possible to hear clash of heroes, portal destruction and exclamations of battle participants.

Gold coins used to get new decks of cards and to upgrade heroes, are a big problem in Smash Kingdom. Most often, they are simply not enough for a full-fledged game, which is why you have to raid the magic portal constantly. One of the reasons why the game can make you bored. Therefore, users have the opportunity to install the project in question with a built-in mod that allows spending gold coins and crystals in unlimited quantities. Moreover, the mod removes annoying ads that appear in online game mode.

The main menu contains several important tabs: Store, Deck of cards, Combat and special cells, available exclusively upon reaching level 7. The battle itself takes place from the top. There is a slingshot in front of the player designed to transport selected heroes to the battlefield. Each hero costs a certain amount of mana points that you can easily accumulate during the battle. Therefore, the player should wisely spend its supply. 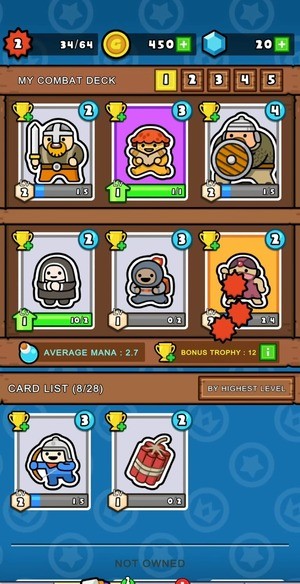 Smash Kingdom: Slingshot Action Defense has become popular thanks to its unique fighting mechanism. Here the player will be able to collect his own unique deck of cards and defeat the monsters that have fallen on the lives of castle settlers. The gamer is waiting for a whole story that could have a successful conclusion.