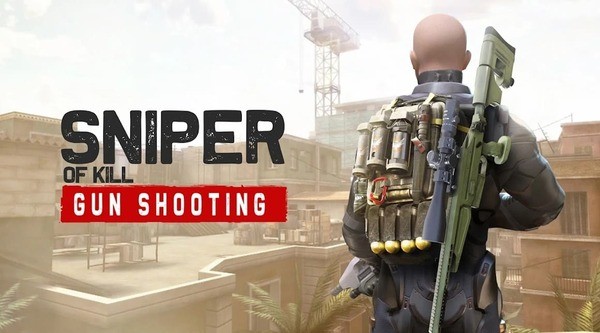 Sniper of Kill: Gun shooting is an exciting virtual shooting range where you can shoot at criminals from a wide variety of weapons. Here you will act as a sniper of an elite special unit. Small bandits, big Mafiosi, drug dealers, thieves, robbers and murderers will become your main enemies. The developer has not deprived you of the pleasure of participating in sniper duels, in which the enemies will not be bots controlled by artificial intelligence, but the same players as you. A huge number of tasks, festive events and a well-developed network mode – all this will definitely interest you. In order for the player to get as much aesthetic pleasure as possible, he will be able to watch the flight of his bullet in slow motion. If you like action games, we also recommend paying attention to Six-Guns: Gang Showdown and War After.

When it comes to success and popularity, then it is worth looking at the project statistics provided by official sources. The described application, although not particularly original, but the users received it very warmly enough.

Developers worked out mechanics of improving weapons in Sniper of Kill: Gun shooting in detail. For example, you can change and improve the following components in a sniper rifle: body, stock, barrel, sight, silencer and magazine with cartridges. Each change affects a number of parameters that each rifle possesses (damage, range, stability, reload time and magazine size). All the details and changes are relevant for other types of weapons. In addition to functionality, external qualities are also improved. 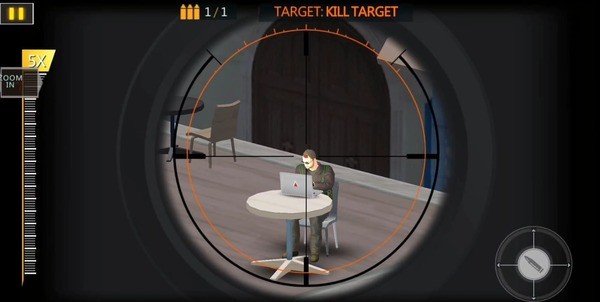 After the maximum improvement of the current weapon, it is worth turning to the arsenal to buy a cooler rifle. Their variety is amazing, but the prices are strikingly different from each other. All weapons are conveniently divided into classes. This solution excludes the possibility of accidentally buying a weaker rifle. The choice of weapons is highly dependent on the specificity of the mission. Somewhere you need to kill 1-2 targets and somewhere to eliminate a whole crowd. In both cases, fundamentally different parameters of the weapon are important, which adds some flexibility to the passage.

After switching to the Tasks tab, you will see all possible modes of Sniper of Kill: Gun shooting:

Mission concepts are very different. Each task has several stages and only completing all of them will lead you to the desired reward. You can be a bodyguard on one level and protect a high-ranking official. On the other, you can defend a ship from an attack by Somali pirates. In addition, it is possible to fail some stages if you kill the wrong target, hurt civilians, or do not invest in the given time. The variety of gameplay is so great that the description of the tasks would take more than an hour. We recommend downloading Sniper of Kill: Gun shooting for a detailed acquaintance with the gameplay. Figure it out on your own. 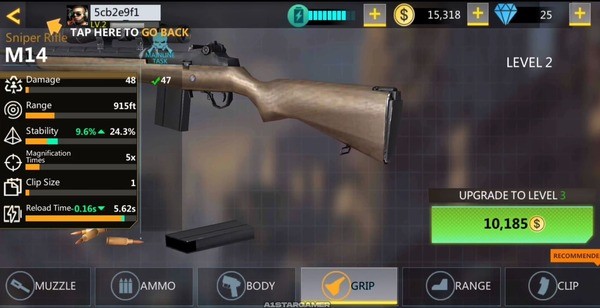 Slow-motion bullet field will add entertainment to your accurate shots here. It looks very nice considering the high quality of the graphic design. The bullets, upon reaching their goal, will enter exactly the part of the body at which you were aiming. Blood splatters and a bullet hole on the body add a realism to the gameplay that you cannot find in competing games. In addition, different rifles sound differently, which adds to the realism of Sniper of Kill: Gun shooting.

Paying money is one of the main topics for criticism of the described projects. Guns upgrades are quite expensive, so there will always be a shortage of currency you earn from missions. Therefore, you can download our Sniper of Kill: Gun shooting mod for unlimited money.

The gameplay of Sniper of Kill: Gun shooting is very similar to an ordinary virtual shooting range. You will not be able to navigate the locations on your own. The main task of your character will be the systematic shooting of designated targets. The secret of success lies in the numerous and varied missions, selected for almost any type of game weapon. All tasks are main and secondary stories, as well as additional missions that allow you to practice your sniper skills, earning coins along the way.

Shooting is an integral part of the gameplay of virtual shooting ranges. It has the highest level. When firing, you need to take into account the distance to the target. Hold your breath so that the sight does not shake so much. Determine the wind speed, and so on. The chance of hitting a target also depends on the type of weapon used. Yes, the characteristics of the rifle directly affect the shooting. If it hits a person, the bullet will go right through, so there is always a chance to hit civilians. When aiming, you can change the zoom magnification, if this option is available on the weapon of your choice.

To diversify the gameplay, the developers of Sniper of Kill: Gun shooting have also added the most difficult missions to eliminate other snipers and hostages. Moreover, it will not always be immediately clear who is the perpetrator and who is the victim. Therefore, use your deduction and observation to fire a bullet at the right target and not destroy an innocent person. However, just aiming the center (crosshair) on the victim’s head is not enough. You are a sniper and operate at a great distance. Therefore, use your knowledge of physics.

At first glance, Sniper of Kill: Gun shooting is another virtual shooting range. At the same time, game details and nuances are carefully worked out, making the gameplay very rich. A large selection of weapons and an interestingly developed quest system will definitely not let you get bored.