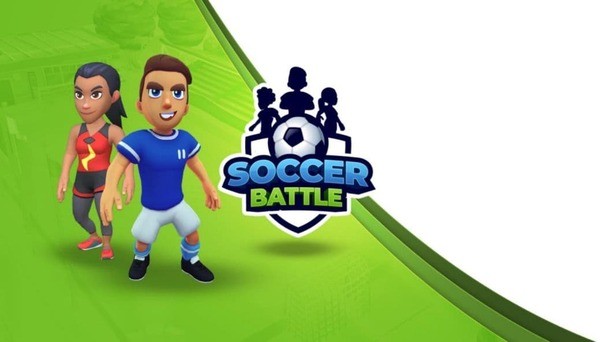 Soccer Battle – 3v3 PvP is a soccer application where players have to show skills on a green field. The battle includes two teams of three people and the main goal is to hit each other’s gates. As a rule, matches last to three goals scored. What is especially important – all battles are held in multiplayer, so you have to play against real players, who are much more difficult to fight than artificial intelligence. Perform risky tackles, deliver ingenious passes and deliver accurate shots to hit the opponents’ goal. Choose among sixteen different players, upgrade their skills and become faster, becoming more enduring and accurate. Prove to the whole world that you are the heir of Pele and Messi. Play and Win! If you are interested in sports projects, then we have also prepared EA Sports UFC Mobile 2 and Wrestling Revolution 3D.

We have prepared for you a detailed review of Soccer Battle – 3v3 PvP.

Right at the beginning of Soccer Battle – 3v3 PvP, you need to go through a short tutorial and play against bots. Learn how to tackle, pass and shoot on goal. Then you will start your career in multiplayer mode. From now on, all rivals, as well as teammates, are real people. On the one hand, this complicates the gameplay, but on the other, it makes it much more interesting. After all, it is almost impossible to predict the actions of real users, unlike artificial intelligence. There are also disadvantages to this, since the game looks for match partners for a long time.

Another great feature is the creation of your own team of friends. Find two more acquaintances and play together for the same team. Such tactics give undeniable advantages, because you already know each other well and can establish perfect mutual understanding on the field. Create a special room and go there three together to unite into one team. Then look for opponents online. Win tournaments and championships with loyal friends in Soccer Battle – 3v3 PvP.

Soccer Battle – 3v3 PvP is not exactly classic football. There are no judges here – hence there are no violations of the rules. No outs – the field is fenced off, so the ball bounces back onto the lawn. There is no offside either, so you can safely run behind the backs of your opponents. Finally, there aren’t even goalkeepers here. Each player can perform such a function, so the main thing is to have time to run to your goal. The developers have come up with many scripted scenes, as well as unique events. Thanks to this, each goal is different from the previous one, and you can apply different tactics and strategies to achieve success.

If an opponent has the ball, then just tackle the ball. Moreover, if the tackle is successful, then the enemy will lie on the lawn for a few more seconds, unable to resist you. Keep in mind that you move more slowly with the ball than without it, which makes it difficult to score goals. Practice long shots or kick the ball into the goal. Everything is limited only by your imagination in this application.

Developers introduced a pumping system into the project, as well as different characters to make Soccer Battle – 3v3 PvP even more interesting. There are 16 of them. Each of the heroes can het upgrades using in-game currency. Thanks to the improvements, you can make your players faster by increasing their speed with and without the ball. In addition, you can improve the power and accuracy of the blow, as well as several other useful characteristics. Each of the characters has own unique style. Here you can choose both a man and a woman. Rugby player, surfer, boxer, tennis player – they are all ready to enter the football field and play for you. Players are only required to win matches and upgrade players.

The application features a top view – the user sees all objects from a dynamic camera, focused on your football player. If the ball leaves the player’s field of view, the application shows in which part of the field it is. It is also worth noting the voice acting of a professional commentator who speaks the opening remarks before the matches and comments on some events during the gameplay.

To upgrade football players and purchase a variety of skins, Soccer Battle – 3v3 PvP requires a lot of in-game currency. You can obtain it during football matches, but it is also possible to download the mod for unlimited money. It allows you to forget about financial difficulties and play for fun. In addition, characters will become stronger and faster, giving the user an edge during multiplayer matches.

Control you players in the project under consideration with two hands. With the left, you set the direction of movement and you perform actions with the right. If you have the ball, you can pass or shoot. The choice depends on your position on the field. If the opponent attacks, then you need to tackle and pick it up. Intuitive control, a minimum of burdensome functions, full localization into English – all this creates favorable conditions for a beginner to adapt to a project.

An addictive and large-scale gameplay that gives an almost complete picture of teamwork is another feature of Soccer Battle – 3v3 PvP. This is a real gift for football fans. Enjoy the gameplay of the project, playing with maximum comfort. To do this, you just need to install the application on your android device.

Is it worth wasting time on Soccer Battle – 3v3 PvP? Yes, since the game has its own view of the specifics of the genre and can offer unique nuances in the mechanics of the gameplay.