Sonic Dash is official game from SEGA designed for mobile platforms and is nothing more than an endless runner filled with obstacles. Control Sonic the hedgehog and other characters, maneuver, collect bonuses and destroy enemies! Go through picturesque locations to fight a powerful boss. Run along intricate tracks, collect rings, various bonuses and deal with enemies. Here you will actively use Sonic’s cult abilities, for example, acceleration, somersault, and more. We should note right away that this project is completely aimed at a young audience, so here you will not see scenes of cruelty. We also recommend you to download Spin Rhythm and Om Nom: Parkour.

The first mentions of development beginning were back in 2013. Developers officially confirmed the project on March 1 of the same year. Already on March 7, the game was available for download on Play Market.

As with many runners, the gameplay in Sonic Dash is an endless run. However, unlike many other games, the actions take place not on one level, but in three. “Seaside Hill” features familiar green hills along which everyone ran on 8-bit consoles. “Temple” track offers the road in middle of the ocean, while “Beach” represents lifeless beach. The zones smoothly flow into one another, which greatly adds variety to the gameplay. 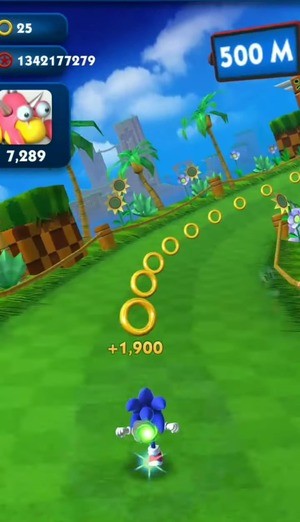 The essence of whole Sonic Dash gameplay comes down to improving your previous results every time. Running and collecting rings with destroying enemies, you receive points that the game sums up and records in your statistics. Play various mini-missions to increase the score multiplier. The tasks are quite simple. You have to collect a fixed number of rings, run specified distances, destroy enemies and jump over a specified number of obstacles and so on. For completing tasks, you will also receive currency. Fighting enemies is very simple: you just need to click on a somersault. During somersault, the character is almost invulnerable and is able to take out enemies from the track.

Earlier we mentioned that Sonic Dash provides access to a variety of characters from game universe. To open them, you need to participate in roulette, in which nothing depends on you. If you are lucky, you will get a new hero, and if not, you will have to try again. You can spin the roulette wheel only for a rare in-game currency, which is quite problematic to earn here. It is also noteworthy that you cannot get exactly the character you wanted. The game itself decides which hero to give you.

Each character in Sonic Dash has its own individual list of abilities open for upgrades. These improvements relate to the bonuses you can find in the level. Here you can increase the duration of ring magnet, provide yourself with quick start on the track, increase accelerator effect and increase recovery speed. These improvements are available for rings collected quickly enough. Sonic Dash graphics are incredibly colorful. Developers drawn the characters in detail, making captivating special effects. Sensations of acceleration and flight seem incredibly real. In addition, you can hear the music familiar to many from other projects about Sonic during the gameplay.

There are many paid options, actively imposed throughout the entire gameplay. Donation allows you to buy unlimited number of in-game currency. You can spend it on improving and unlocking new characters, buying revivals and much more. In-game currency offers you one-time bonuses that can help you with a new record. That is why we suggest you to download a mod for unlimited amount of money.

You need to run in Sonic Dash along a three-lane track, collecting golden rings along the way and destroying evil crabs. Thus, you free the innocent beasts captured by the villains. It is possible to improve animal grounds at the end of each round, but only with certain accumulation of points. Build slides, pools, cabins and so on for them. 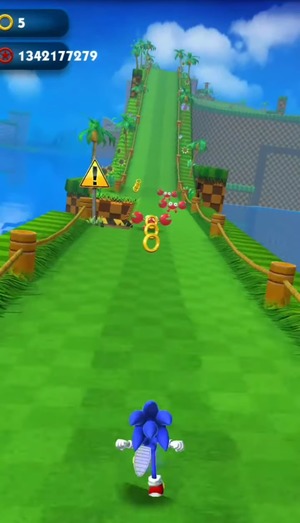 As soon as you improve each site as much as possible, you can get access to one of the new characters – Knuckles, Amy, Rouge and others. Each of them has special skills, but they all purposefully go to victory, folding into a ball to attack.

Come across on the way not only evil crabs, but also other obstacles. Blockages to jump over, piles to bypass and thorns not to step. Cliffs, underwater tunnels and swirling slides – it will definitely not be boring. You have to show remarkable reaction speed and attention.

If you like to test your reaction to strength and are not afraid of fast gameplay, then download Sonic Dash and enjoy the gameplay. Unlike competitors, this project has several game locations, which does not let you get bored of monotonous picture. Boss battles will only fuel your interest.