Sonic Forces is an original runner about the beloved Sonic the hedgehog and his friends, which invites all players to immerse in exciting PvP races in order to increase the rating. The essence of the game is to come to the finish line first, successfully passing all obstacles and traps. At the same time, it is important to collect bonuses and gold coins that can help you unlock new characters, customize their appearance and pump them. The app is very similar to Subway Surfers and differs from it only in gameplay details and setting. The project is very popular with children and the gameplay here is unlikely to bore little gamers. The plot of the mobile application comes down to the confrontation between the protagonist and Professor Eggman. In addition, we prepared Sonic Dash for you.

Read our review to learn about all the features of Sonic Forces gameplay.

The gameplay of Sonic Forces invites you to immerse yourself in exciting competitive process that constantly surprises you. Here you will find only one game mode, which essence is to race against real players. Each time one of the most interesting tracks is available for the race. Often you find yourself on the same track, but the software algorithms can make some adjustments so that you cannot learn the path and walk it with your eyes closed. 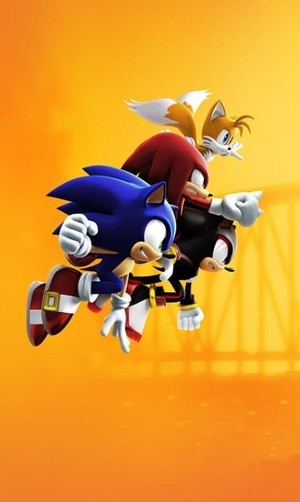 Opponents will be matched depending on the level of your hero, so system balance is very pleasant. Regardless of your victory or defeat, you receive prizes, but their quality depends on your place at the finish line. If you want the most interesting rewards and a large number of experience points, then try to come first.

The tracks themselves in Sonic Forces require you to have a high reaction speed, since the characters here move extremely quickly and obstacles appear quite unexpectedly. You have to run along narrow bridges, dodge mountains of garbage, jump under beams and over barriers. It is worth noting that enemies are waiting for you and it is possible to destroy them by pressing roll or jump button. There are also abysses and steep climbs. In this regard, you need to show dexterity and attentiveness in order to reach the finish line first.

If you think that obstacles on the track are the biggest problem, then you are wrong. Each of the characters represented in Sonic Forces have own set of three abilities. One of these abilities is a temporary accelerator, while the other two give you the opportunity to set up a trap for your opponents. Traps here are mines, whirlwinds, frost traps and much more. You need to collect boxes with question mark on the track to activate these abilities. These boxes can either charge one of the abilities or give you a shield, which give you temporary invulnerability to competitors’ traps. There will also be golden rings along with boxes on the track, which have long become an analogue of in-game currency in games about Sonic. 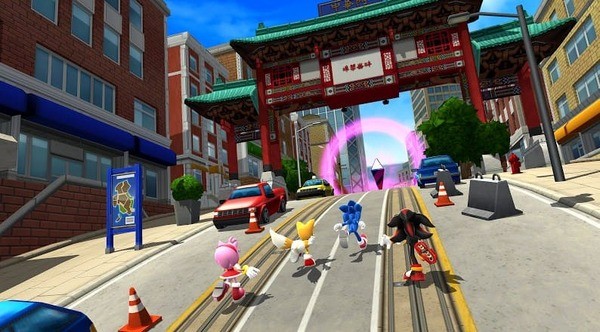 Unlock new heroes and upgrade them

Winning Sonic Forces matches brings you rating points, gold rings and special chests. You need to open some chests for some time in order to receive a reward, while others allow you to receive a reward immediately. You can drop from the chests the usual currency in form of rings, donated red circles and character cards. Use these cards to unlock new heroes or improve old ones. You should understand that improvements play an important role here, because they increase both the effectiveness of the hero’s superpowers and his characteristics.

Realistic 3D graphics with detailed characters and vivid effects are present in the application. The picture is high quality, but requirements of the project are quite serious. You can also hear dynamic music played during the races.

Sonic Forces has serious system requirements and therefore the application size is quite large. You will need several hundred megabytes on the device to install the game. There is usually a separate file for the cache, which you need to install separately from APK file. We offer you a mod with a built-in cache available for installation on any Android device with one click. Moreover, you can use special mode menu where you can enable several features:

Now, 42 characters are available in Sonic Forces, among which, in addition to Sonic, you will find Tails, Knuckles, Charmie, Rouge, Amy, Blaze, Vector and others. During the race, you can use some special items that each character has. Here are just a few of them:

With due diligence, you can get into the rating of players, both world and by region. Ratings reset periodically, marking the end of the season. You need to train hard to get to the top of the rankings. 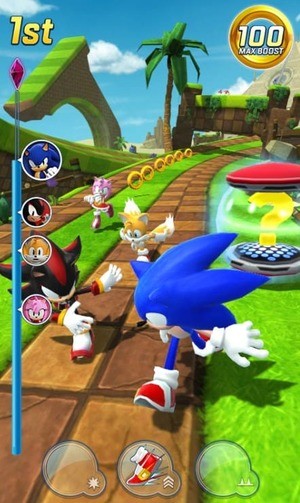 The developer paid a lot of attention to donation in Sonic Forces. You can open the previously mentioned chests instantly if you pay a certain amount of donated currency. If you do not want to participate in races to earn a chest, then you can buy it in a special menu. You are more likely to get character cards from purchased chests. It is worth saying that legendary characters are much faster and more agile than ordinary ones, so donators have some advantage in the racing framework.

If you like genre of runners, then it’s worth downloading Sonic Forces to enjoy superb gameplay from the big screen. Choose one of 42 characters, upgrade him and defeat random opponents. Take the first places in the ratings, proving to the whole world that you are the best runner!