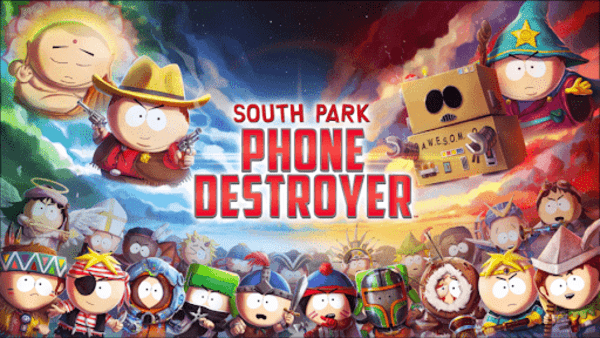 South Park: Phone Destroyer is an example of a good free collectible card game. Funny jokes, interesting references to South Park and high-quality recreated atmosphere of the series captivate you and don’t let you go for a long time. Together with Newbie, help Cartman defeat Stan’s team in the war of cowboys and Indians. Walk through the levels and show how much better you are than the enemies who got out of the trashcans. Moreover, your partners will be happy to help you and take on most of the dirty work. If you love wall-to-wall battles, then we also offer you Grow Castle. In addition, for fans of fun and colorful games, we recommend Bowmasters.

South Park: Phone Destroyer is a game based on the South Park franchise that conveys its entire unique atmosphere of irony and sarcasm.

From the very beginning of the game, first, you create your own character. The character editor in South Park: Phone Destroyer is very versatile, despite the fact that such moments are usually absent in such a genre. Customize the color of your skin, hair and mustache. Change the shape of the eyes and mouth, change the hairstyle and make the character’s mustache and beard obey your decisions. You can wear glasses and choose any style of clothing you are interested. At the same time, you are not wasting the time. During character creation, the game loads additional files, not forcing you to wait until the download slider reaches the end. 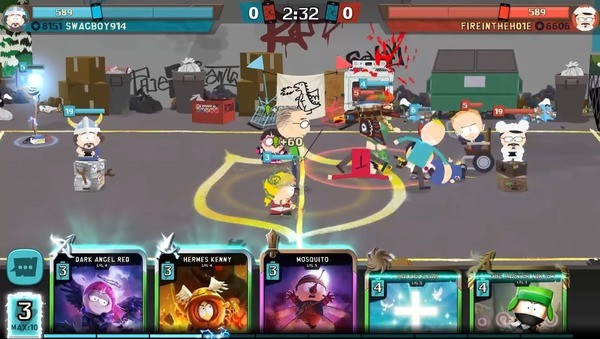 At the beginning of battles, you choose the cards with which you will fight. There are four types of them in total: warrior, tank, magic and shooter. Each unique card has its own parameters and cost in terms of energy replenished during the battle. If you want to win, you need to strategize correctly, choose the right cards and use them on time. Almost immediately, battles with real players are available to you, taking place in a slightly smaller arena, divided in half.

Visual style that makes you smile

The style of South Park: Phone Destroyer is fully consistent with the South Park series. At the same time, many of the components in the game have noticeable diligence and attention to small and large details. For example, when other characters in the original work call you, your conversation looks like animation in a FaceTime call. All the other characters communicate with each other via smartphones and it is not so rare that you receive notifications with messages right during the gameplay. Even the opening of new sets is very elaborate and beautifully animated. The locations make you want to go and watch the series again.

South Park: Phone Destroyer has a lot of hand-drawn characters, a huge number of locations and objects with great attention to detail. The visual component cannot but please anyone who has played this game at least once. The developers obviously tried to please absolutely any person who launches this game – from the connoisseur of the series to the newcomer who came for the first time. The sound component is at the level of the original, if not better. The soundtrack suits any situation with individual sounds gently communicating what’s going on. 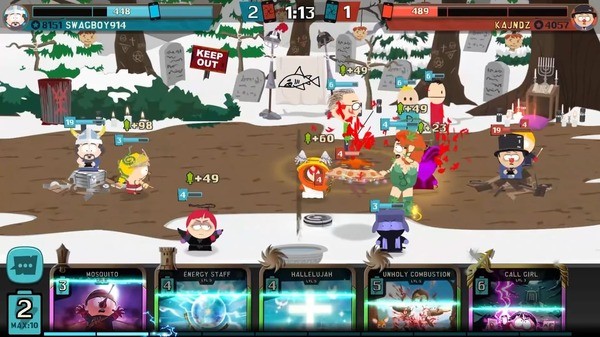 The most important combat resource in South Park: Phone Destroyer is energy, and very often, you may not have enough of it to win. Our unlimited energy mod allows you to dominate the battlefields. Show even the most powerful opponents that no one has a chance against you. In addition, you can quickly go through the storyline. Just climb to the highest ranks in battle ratings against real players.

We’ve tested South Park: Phone Destroyer for its claimed benefits. Based on the results of our test, we can confirm to you that the energy mod is working properly and works just fine. In addition, the game is completely safe for your android device. We have tested the game by several antiviruses. Our team guarantees that it won’t cause any harm to your gadget.

The gameplay in South Park: Phone Destroyer is similar to many collectible card games and is an adventure through direct levels with opponents constantly getting out on you. Just choose the cards you want to play and use all its abilities in time. In this case, it is necessary to thought out strategy already at the beginning of the battle. You need to monitor the energy level, since calling cards is not free, and many strong cards cost more than ordinary ones. You can also control the characters themselves during the battle, and do not forget about this – four characters standing in a heap are easily vulnerable to any massive ranged attack. For example, when an enemy with ranged characters is playing against you, it is better to choose air allies. 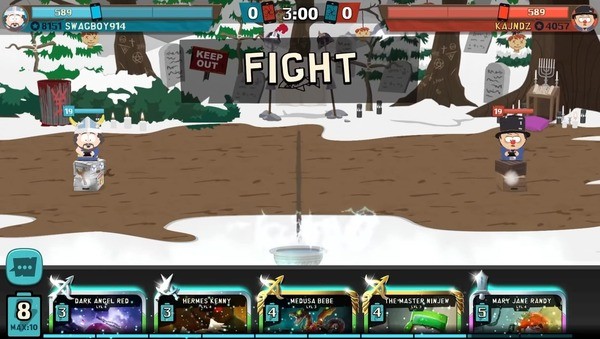 South Park: Phone Destroyer is one of the prime examples where the developers created a game with players in mind, not money. It is definitely worth playing, and unlimited energy mod can give you the opportunity to win in any situation.

Don’t forget to delete the original version of South Park: Phone Destroyer before installing our modified version to prevent errors during installation process.