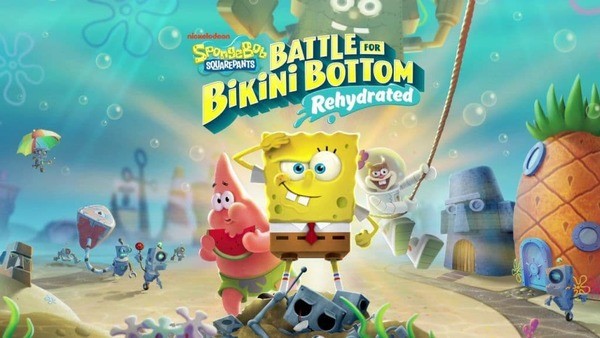 SpongeBob SquarePants: Battle for Bikini Bottom is a re-release of 2003 platformer from HandyGames team. You have to play for your favorite characters, go through difficult but exciting levels and enjoy nice graphics. Your main task is to go through all the locations with the help of three heroes you know and defeat the insidious robots that attacked your house. The game can especially appeal to fans of original cartoon, because it contains many references and corporate humor. This app is a classic platformer from early 21st century. It has many different locations filled with puzzles, challenges and obstacles. By the way, we have other cool games for you. For example, Ninja Arashi 2 and Talking Tom Gold Run.

Find out the main features of the project by reading our review.

References to the original cartoon

The story of Battle for Bikini Bottom begins with the insidious Plankton once again devising a plan to steal the crabsburger recipe. An army of robots should help him in this. As usual, not everything goes according to plan, since the robots have an order to disobey their master. That is why the Iron Army set out to destroy Bikini Bottom. Now SpongeBob and his friends need to protect their home from the evil crowd of robots. The project perfectly manages to convey the cartoon spirit. Meet your favorite and familiar characters: Mrs. Puff, Mr. Crabs, Harry and Squidward. Visit famous places like Medusa Fields, Lair of the Sea Superman and Krusty Krab. The app also contains references to the cartoon. For example, Rock Bottom vending machine and dehydrated SpongeBob in Sandy’s dome. It’s amazing how well the game understands cartoon details. 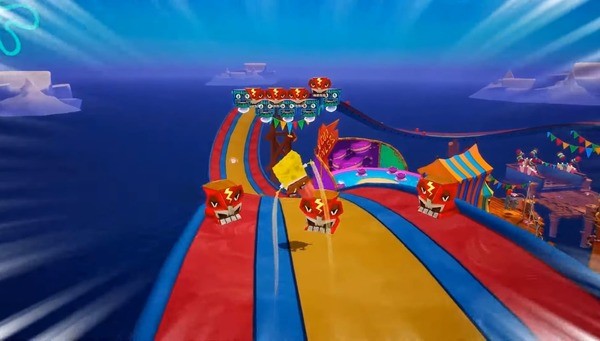 As with most 3D platformers, you have to spend a lot of time exploring the world around you and collecting items. At the same time, you need to fight enemies and make your way through various intricate locations such as Kelp Forest and Lagoon Gu. Each location turned out to be very extensive, so many of them include several mini-locations. Items scattered throughout Bikini Bottom include gold spatulas needed to get to other areas of the city. In addition, you can exchange famous Patrick socks for the same shoulder blades. If you missed several items during the walkthrough, you can always return to the previous territories using the map. This mechanic was in original game, and it remains the same in updated version.

Battle for Bikini Bottom allows you to play not only for SpongeBob, but also for Sandy and Patrick, who have their own unique abilities. For example, SpongeBob can use a guided bubble rocket, Patrick picks up and throws various objects and Sandy uses lasso. You can switch between characters at bus stops, but you can use Patrick and Sandy only on specific locations. If you want to play as the famous squirrel, you have to understand that you cannot do it in some locations. Most of the time, there is nothing wrong with this, as the levels are built around the currently available characters. However, Sandy’s ability to fly is so good that it is sometimes difficult to refuse it. 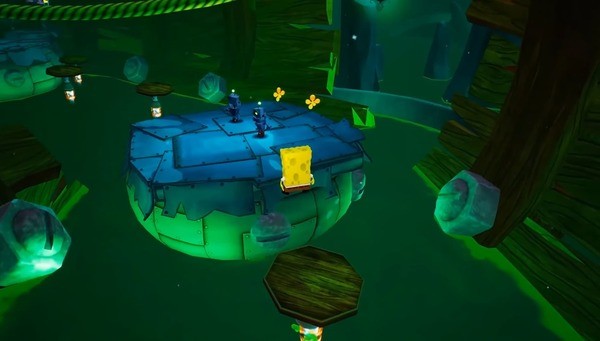 SpongeBob SquarePants: Battle for Bikini Bottom adheres to the original game design. The updated graphics turned out to be bright and juicy, as world and characters began to play with new colors. Developers have also redesigned beachside soundtrack to highlight the mood of each location.

The project in question is a paid game. In official sources, its cost can reach $10. However, we can offer you to download the game free and save some money.

Based on verification results, we can confirm that app has no problems with installation on Android device. Now you can enjoy the addictive gameplay without buying the game. All you need to do is to read the installation instructions carefully, unpack the cache and run the project. After that, it becomes possible to plunge into the magical underwater world of SpongeBob, his friends and enemies.

SpongeBob is one of the most popular cartoons in history. After its release in 2003, 3D platformer Battle for Bikini Bottom immediately gained universal love from fans for standing out from other projects developed under license. 17 years later, developers from HandyGames decided to bring the game back to life by releasing a remaster for Android. If we were asked what the coolest game of 2020 we played, we would answer – SpongeBob SquarePants: Battle for Bikini Bottom.

Most of the game mechanics are simple, but a few things stand out. SpongeBob needs to lead a giant ball through the maze and Patrick needs to guess where to put the statues. Most of the challenges are a little outdated and unlikely to surprise the modern gamer. However, overall level design, characters and item gathering are good enough to spend time playing without interrupting.

The journey of SpongeBob and his friends around the app world can still bring a lot of fun. Most importantly, the game perfectly captures spirit of original cartoon. This is what fans can appreciate the most. It is nice to see that developers of Battle for Bikini Bottom didn’t forget the game, but on the contrary, brought it back to life.

How to install SpongeBob SquarePants: Battle for Bikini Bottom Mod?