Star Trek Fleet Command is an addicting space strategy game based on the cult series and movie Star Trek by Scopely. Exciting space battles and confrontations between the conflicting races for the sphere of influence: Federation, Romulan and Klingons are waiting for you. Develop your base, which is in open space. Take control of famous heroes: James Kirk, Nero, Spock and other powerful allies who can dominate the rest of the players. Create your own fleet of the most powerful starships that can overcome thousands of parsecs in seconds and terrify enemy lines. Become a real diplomat to solve vital issues not only with brute force, but also with your mind. Join one of the pantheons that are trying to seize influence over the main objects of space – the Beta and Alpha quadrants. Among other strategies, we recommend checking out King of Defense 2 and Infinitode 2.

Star Trek universe invented by Gene Roddenberry back in 1961 has gained millions of fans and has become incredibly popular. If you are a fan, then be sure to download Star Trek Fleet Command.

The galaxy is teetering on the brink of war. Warlike Klingons, cunning Romulans and members of planets united federation wish to take control of the Alpha and Beta quadrants. You have to choose one of the sides of Star Trek Fleet Command, create your own space base and contribute to the flaring up confrontation. Use all of your skills in diplomacy, people management, strategic planning and warfare to achieve your goals successfully. 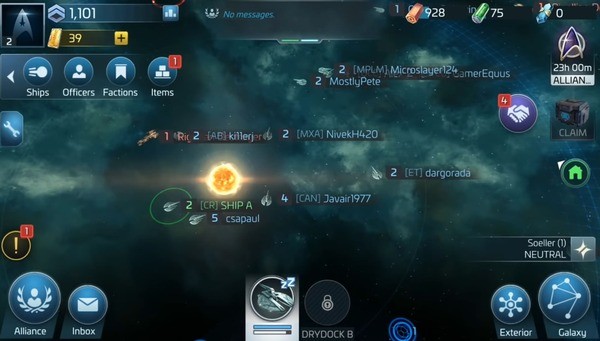 Be careful when choosing an ally. Think about who you sympathize with more and whom you would like to see as a rival. In the future, it will not be possible to cross over to the other side.

For your squadron to be combat-ready, it must be developed. You have to buy, mine during missions and build new ships. Each of them has options for improvement, but first it is required to organize the extraction of resources and obtain innovative technologies. To manage all this, you need competent officers, among whom many players will recognize Nero, Spock, James T. Kirk and many other characters from the films about the Star Trek universe.

The environment in Star Trek Fleet Command is constantly changing. Other players also want to rule, which means you need to constantly monitor their activity, build defenses and make alliances. It is much easier and more effective to fight together. However, the main task is to reveal an ancient secret that can significantly increase your strength.

All battles between players take place here in real time. To achieve victories, you need not only a powerful fleet, but also a competent combat strategy. It is desirable to coordinate everything with your friends in the alliance – so the overall ability to resist the opponent will noticeably increase.

Battles with other players are far from the only part of the gameplay in Star Trek Fleet Command. In addition, you will certainly be pleased with the huge number of tasks to perform on various systems. Earn valuable awards completing them. If you get tired of everything, you can go to explore yet unexplored worlds. Who knows what they have to face there: a new form of life, an aggressive civilization or a mysterious phenomenon? 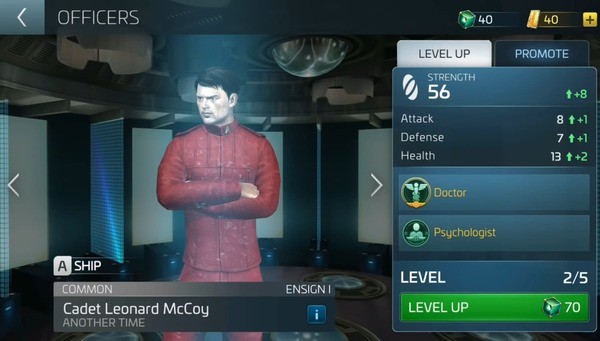 Base development and recruitment

When traveling across the galaxy, do not forget about your base – after all, enemies can attack it at any time. A competent and comprehensive defense is just as important as a powerful attacking force. Choose as officers those assistants who have unique and appropriate tactical abilities – they will more effectively cope with their duties.

Star Trek Fleet Command offers users stunning graphics in a space setting that will delight all fans of the genre. Space battles performed at the highest level,

To better pump your ships and buy improvements for them, download the mod for unlimited money.

Please note that the Star Trek Fleet Command mod may be unstable, as developers release updates very often. If you have any problems and the mod does not work, then follow our updates.

In space, the player has to face endless spaces, discover new planets and get many useful resources. In addition to research work, you have to go on a long galactic journey, where you will not only enjoy flying in space, but also fight space pirates, complete missions, etc. 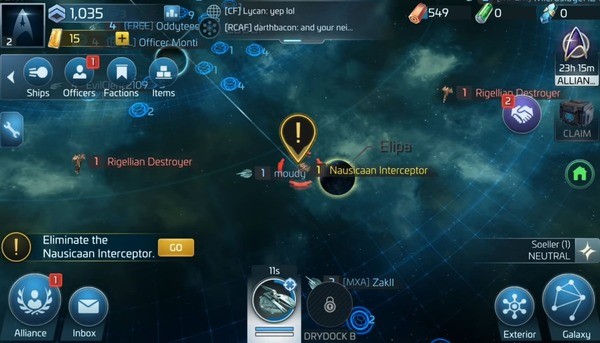 The developers invite you to become a full-fledged member of the squad and realize all your wildest dreams, which are possible only in outer space. According to the plot, three races will clash here in battle – Romulans, Klingons and the Federation. In terms of gameplay, the game is more reminiscent of strategies such as Clash of Clans, but has a number of its own unique features and developments. To become a thunderstorm of space, the Star Trek Fleet Command player has to complete missions, earn experience and make improvements to the ship and base. This is the only way to become strong and fearless in front of any enemy.

In the process of passing, you will encounter representatives of all factions, but the relationship with them depends on his further actions. To simplify your task, you can immediately join one of the factions and follow only its interests, but from time to time, you will have conflicts with other rivals, which can lead to irreversible consequences. Resources in the game are the main goal of all parties, so their extraction comes first. A nation that extracts more resources in space will have a much better chance of winning a war than rivals.

Space has always attracted many people with its mysterious silence and uncertainty. What hides in the endless universe with a huge number of stars, planets and other space objects? If you like to explore these expanses – you can download Star Trek Fleet Command to not only explore them, but also to take part in the global intergalactic conflict.