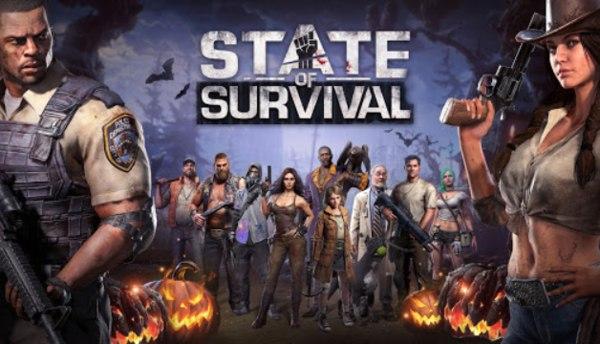 State of Survival is a mobile RTS with elements of a city-building simulator and corridor action from KingsGroup Holdings. Try on the role of the commander of small survivor’s base who managed to withstand the onslaught of zombies and survive the apocalypse. You must take care of the settlement, extract resources, protect the base from uninvited guests, find new uninhabited territories and save as many survivors as you can.

State of Survival has over 10 million downloads on Google Play. Let’s see what is the main secret of the game.

A unique combination of two genres

State of Survival successfully combines the features of two popular game genres. Both the strategy and the zombie theme are in demand among gamers and look very appropriate. The player have to organize the shelter and gradually improve it. We should pay special attention to the base – center of the camp. The ability to build other structures directly depends on its level.

After the first launch, the user will be briefly informed. You will know that zombies first appeared during the Halloween celebration, which is why government could not stop the infection in time. During the main campaign, you have to get samples and materials for a doctor who is looking for a cure for the virus. He is sure that he can end infection, but for this, your squad have to face terrifying mutants. After completing the main campaign, you can continue to explore the world, as well as fight with everyone around.

It’s impossible to get bored in State of Survival. The game has a number of interesting activities – maintaining the state of the settlement, replenishing useful resources, training soldiers, conducting reconnaissance, organizing command, etc. It also includes battles with monsters. Throughout the game, you need to observe the conversations of the characters carefully, as they affect the disclosure of the plot and allow you to understand the behavior of the characters.

Directly the player himself controls the squad of heroes. In addition, you can choose a specific character as the commander for the search party that moves around the global map. Each of the heroes in State of Survival has its own strengths and weaknesses, a role on the battlefield and own ability. The player can use it whenever he wishes. For example, the main character has a turret in the role of such an ability, which he can install in a specified place. It automatically fires at advancing enemies.

The camp is your fortress. Behind its safe walls, you can build many buildings that can help you survive. So, a sawmill produces wood, a smelter provides metal, and a warehouse allows you to accumulate and store resources. The farm feeds the settlement, in the workshop, you can improve the equipment, and in the military camp, you can hire fighters who will defend the settlement from enemy attacks.

Forge alliances with other players

If a player wants to achieve high results, he needs to learn how to interact with other players. State of Survival developers have implemented a multiplayer system. You should understand that it is very difficult to solve some problems alone, and sometimes even impossible. It is much easier to find allies, conclude a peace treaty and together with them repel the attack of zombies or other hostile gamers.

The game features high quality and realistic 3D graphics with well-designed character models. Both the environment and the individual characters look good. Overall, State Of Survival looks pretty compared to other zombie strategy games. The sound in the game also has the highest level. Real actors duplicated all the lines of the heroes. You constantly can hear high-quality soundtrack, while the screams of zombies will provide you goosebumps.

To date, developers of State Of Survival are actively fighting the proliferation of game modifications. Nevertheless, our team managed to find and test a mod that allows you to remove the time to cooldown the hero’s skills. Let’s take an example with the main character in the game. He has the ability to place an automatic turret anywhere on the map to shoot off zombies. At the same time, this turret only works for a few seconds. To install the next turret, you need to restore the skill fully. Now, you can use abilities of game characters without cooldown. This way you can place as many turrets as you like or throw an unlimited number of bombs.

Our team has tested No Skill Cooldown feature and, based on the test results, confirms its performance. Immediately after the first launch of State of Survival, press a round button in upper left corner of the screen. It opens a small menu where you can enable the desired option.

In general, the mod works flawlessly. All you need to do is download installation file from our website and install it in accordance with the instructions below.

State of Survival allows you to play several addictive modes, use convenient controls and enjoy simple gameplay. Develop your city in the midst of a post-apocalyptic world, crowds of zombies and other players. Team up with users in guilds, seize territories and raid dangerous zones that are full of various resources and exclusive equipment. By the way, if you liked this game you can also try Clash of Clans and Hustle Castle.

How to Install State of Survival Mod?

Don’t forget to delete the original version of State of Survival before installing our modified version to prevent errors during installation process.