Stick Hero Mighty Tower Wars is a very fun casual game with puzzle elements. You need to destroy enemies, thereby destroying the floors of the tower. Attacking monsters of the same level as you or lower upgrades the character, thereby allowing him to attack a higher-level enemy. Daily quests give nice bonuses. Hundreds of levels to complete, interesting gameplay to train the brain, this and much more awaits the adventurer in this app. Strengthen the character, thinking over the moves. Do not immediately attack a strong hero. Walk through the floors of the tower and destroy his followers in order to fight on equal terms with the final boss. If you like casual games, you can also download Bored Ape Creator – NFT Art and Car Cops.

Stick Hero Mighty Tower Wars is an interesting game, but you should check out the review for more details. 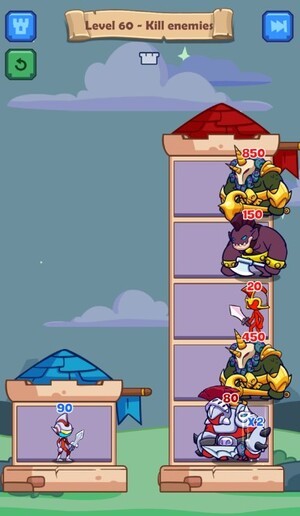 There is only one mode available in Stick Hero Mighty Tower Wars – the story campaign, divided into hundreds of levels. On each of them, your character will be located in a tower on the left side of the screen, and various opponents will be waiting for him in the tower opposite. There is a number above each creature in the game.

It indicates the strength of the character. There is also this indicator above the knight. If it is higher than that of his opponent, then victory is yours. Consider this and not skip the weapons scattered on the levels. To start the battle, just drag the ward into the tower to the opponents on the floor you are interested in and wait for the battle to end.

As you progress through the levels, you pump your hero. There is only one general parameter here, which is responsible for the combat capability of your character. Use it to increase both the attack power of the hero and his survivability. For pumping, you have to spend in-game currency, which you will receive as a reward for your success.

Sometimes the player has the opportunity to merge several characters to get one higher-level hero. This way you can attack strong opponents and destroy them. You can also buy skins for your fighter for this currency. Skins significantly change the appearance of the hero. 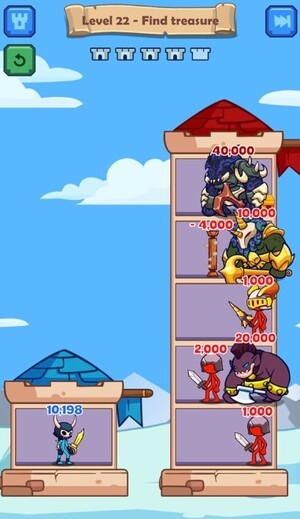 Winning earns you coins that you can use to buy new skins and build your own castle across six different worlds. Each of them differs in the number of levels and boss battles. The castle as a whole serves as your residence and has no practical use. Nevertheless, having your own mansion can be very pleasant and prestigious.

Download Stick Hero Mighty Tower Wars mod APK for unlimited money to buy all the best for your character.

Stick Hero Mighty Tower Wars is a game in which users will find completely simple puzzles that are essentially mathematical examples. It is necessary to evaluate the qualities of the main character, and then send him to capture a suitable floor. Where the opponents are also matters. In the end, you need to get to the boss as pumped as possible and ready to eliminate him. Simple but nice graphics, long duration, various rewards for completing, dozens of skins for the character and much more will captivate and not let you get bored throughout the adventures of this project. 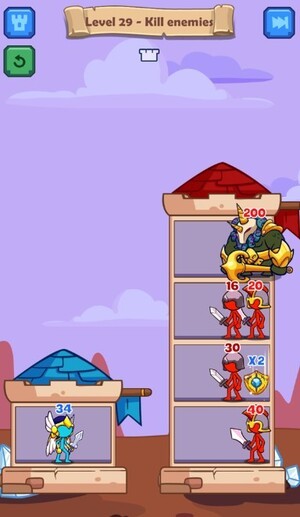 Stick Hero Mighty Tower Wars is a puzzle game in which you have to conquer towers. Calculate, attack and succeed.