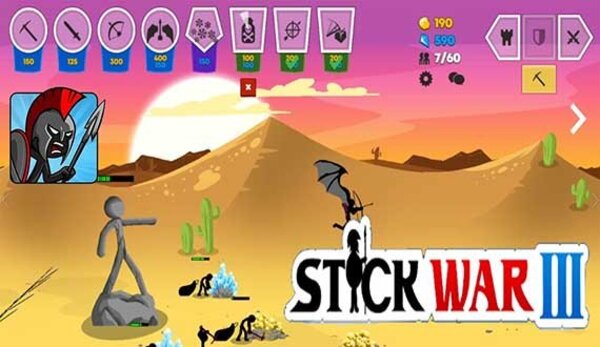 Stick War 3 is a mobile real-time strategy stylized as a conditional category of stickman applications. Unleash a massive campaign by forming a large army and use your skills and boosters to defeat rival squads in online battles. Mages with deadly spells, archers who bombard the enemy with sharp arrows, melee fighters and much more. You control them all by switching between groups. Only the correct command and disposition of troops will help to win the next spectacular massacre. The game offers several modes: single and team battles, as well as campaign, where you will fight against bots. If you like stickmans, then also download Slapstick Fighter and Stickman Escape: Choice Story.

Become the leader of a real army of stickmen, go into battle using spells and power-ups and defeat the enemy by destroying his statue. Use the skills of mass destruction, but at the same time calculate the time of the strike well, turning the tide of battle in your favor.

Many units to upgrade

To say that Stick War 3 will bring you something new in terms of gameplay is an understatement. It has remained almost the same, although there are still some changes. They concern units. First, there are more of them, and much more. Secondly, now slots for units have ceased to be slots for units. 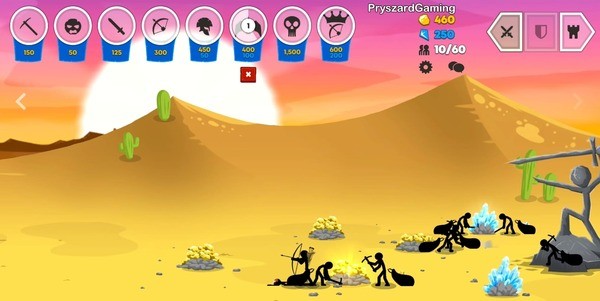 Yes, you will still put them in certain circles, but these circles also serve as slots for abilities, unique heroes, and even power-ups. Here we move on to one of the coolest innovations – these are power-ups. They occupy a slot, but they are passive and just make one kind of your units stronger, faster and deadlier. As for the heroes themselves, globally there are three types of them – magicians, archers and infantry.

Abilities in Stick War 3 have also increased. Here you have acid rain, and mass healing of units and even the resurrection of the dead. Of course, each unit has unique features and parameters. You can see them all in the same army editor. There and the speed of their training and the amount of space they occupy and so on. Help assemble a powerful military squad, bring the economy in order, improve the main units in order to effectively and efficiently strike at rivals by conquering their territory.

Destroy the opponent’s statue and protect yours

Whoever destroys the statue first wins. The opponent has the same abilities, so pick the right team and go to battle! Presence of training, simple mechanics and difficult enemies will quickly plunge you into the gameplay. Go through hundreds of levels, travel to different lands, and cleanse them of evil. You need to act quickly, but at the same time carefully. After all, if you get carried away with the attack, you can miss a sharp attack in the direction of your statue. 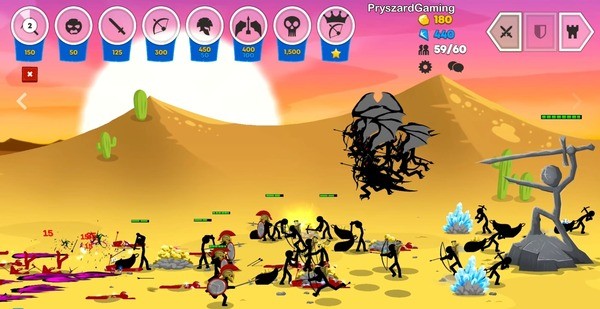 We bring to your attention a mod-menu for the game, which allow you to take advantage of the following benefits:

Stick War 3 will please fans of horizontal strategies with a role-playing bias and offer to manage an army of stickmen in online battles. The game focuses on large-scale network battles with comrades and users from all over the world. It allows you to develop many different skills and unlock amazing combat units. 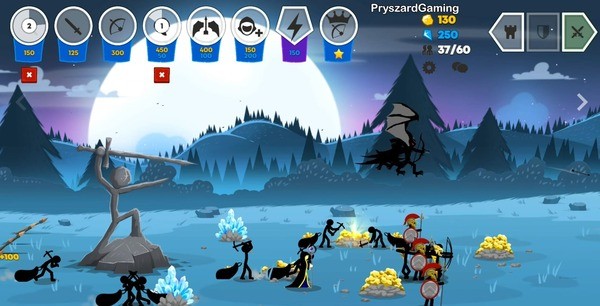 The whole gameplay is based on the competent use of the available cards of warriors, siege weapons. Add magic and special boosters on the battlefield, due to which the appropriate units appear and go to another part of the screen, engaging in battle with the enemy.

Each stickman has unique parameters, great for a universal duel or copes with any personal task. He breaks through a wall, attacks air enemies, slows down, casts spells, uses melee or long-range weapons, special magic and much more. Stick War 3 offer you to demonstrate tactical skills and strategic thinking in various campaign tasks. Creators regularly update PvP battles and special events from the game’s authors.

Stick War 3 is suitable for fans of uncomplicated gameplay. The game gives you the opportunity to relax without really delving into the gameplay.