Stickman Ragdoll Fighter is an arcade game from the famous company CASUAL AZUR GAMES. Exciting 1v1 battles with the use of melee and firearms, ability to improve fighting qualities of the character and easy controls await you. Open fire at your opponent with a shotgun, smashing him with one shot, or dismember him into parts with a huge poleaxe.

You just need to choose your favorite weapon and start a merciless fight, shedding the enemy’s blood throughout the ring and ending the fight with a finishing blow – the so-called fatality. Here is an addicting gameplay, when it is easy to win, but difficult to hit, because the movements of stickman are poorly coordinated. Carry out controls with one virtual joystick. Go through numerous locations, leaving behind defeated enemies and become an outstanding fighter. Download also Scatter Slots and Crazy Dino Park.

Read our review for all the details.

Projects involving fights between characters and the knockout of one of them must necessarily have high-quality physics of the interaction of objects with each other. Stickman Ragdoll Fighter pays great attention to this, since the gameplay presented here focuses on falling objects from a height, sliding and many other natural things. You will also be amazed at how the fighters themselves behave. The developers tried to make all the characters behave very realistically here, so they introduced a special ragdoll physics. The character’s head and body actively interact during battles with other heroes. The presence of this mechanic also introduces a certain element of randomness into the gameplay, since it becomes quite difficult to make an aimed strike.

Fight using a variety of weapons

The battles in Stickman Ragdoll Fighter are short enough and their essence is to reduce the opponent’s life bar to zero. Use any methods for this, but a variety of weapons can be a good help for you. It is noteworthy that the chosen weapon will constantly change. Each new battle not only takes you to another location, but also surprises you with different weapons.

Ranged and melee weapons are used as murder weapons. Most of the weapons do not cause much harm to the opponent, but only noticeably pushes away or throws up. The fact is that at each location you can find several types of weapons. If a character grabs a pistol, then his opponent can use a gun. Further, it all depends on your agility and reaction. The whole process of the battle looks very realistic, which is due to the high-quality physics of the character’s interaction with the environment.

Another distinctive feature of Stickman Ragdoll Fighter is the variety of skins that you can use during battles. You can freely choose from several dozen masks that depict the most popular modern characters. Wear a leprechaun hat or a giant chicken mask over your head to stand out from your opponents. Buy skins for in-game currency, which you can obtain during battles. Do not forget that the application also has several locations – from a simple white background to a boxing ring, a bus stop or a prison.

The developers of Stickman Ragdoll Fighter decided to abandon cool graphics and realistic animations in its project, preferring dynamic gameplay. However, the presence of a large number of skins still brings variety along with cool physics. This main feature outweighs other disadvantages of the project. We also note that all the blows, as well as shots from weapons in the application are sounded.

CASUAL AZUR GAMES studio is famous for the presence of a large amount of advertising in its projects. As a rule, they do not implement purchases for real money into applications, but they add many commercials to make money. Ads appear literally every few minutes and significantly impair the gameplay. To get rid of this inconvenience, download Stickman Ragdoll Fighter app with ad-free mod. Therefore, you can play without interruption and distraction.

The game is ready to offer you fast, but spectacular, battles during which you have to move around the arena, use different types of weapons and try not to fall into all kinds of traps. This project cannot boast of having a storyline, a campaign, but only a set of levels. The described application is completely devoted to the battles of the Stickmen, who declared another war on each other. 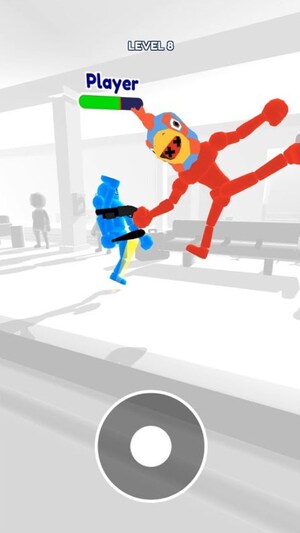 It is worth noting that here you can only fight against bots controlled by artificial intelligence, but you will not be able to fight against real players. The graphic component here is very modest, but a variety of sound effects and gameplay capabilities cancel out this drawback. Buy upgrades and protection, such as a knight’s helmet, mask, horse head and much more that change the appearance and improve the characteristics of the character. The world’s best Stickman Ragdoll Fighter arenas are ready to take on their winner, a martial artist who wields any weapon.

Stickman Ragdoll Fighter is a fun application that allows player to kill some time. High-quality physics allows you to enjoy the battles of stickmen fully.