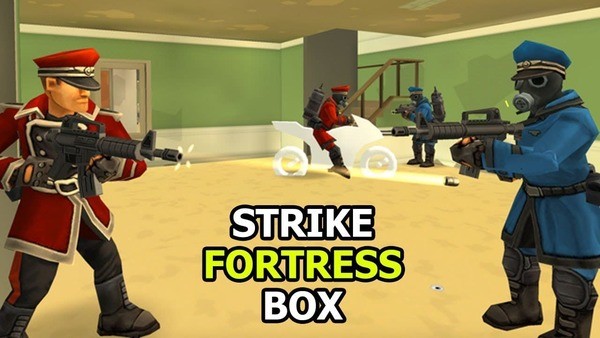 StrikeFortressBox is a fun shooter from the developers of ChaloApps. The project differs from many of its competitors in the presence of a whole sandbox in the game. During battles, you can not only shoot at your enemies, but also along the way create items to change location landscape that can give you advantage. The application has a huge number of weapons, cars and helicopters. Fight on land or take off into the air and destroy opponents from a height. There are three main game modes available, which imply a team confrontation or a solo adventure. If you like dynamic battles, then we advise you to pay attention to Forward Assault and Hunter Assassin 2.

StrikeFortressBox has over 10 million downloads with average game rating of 4.3. Users note a varied and dynamic gameplay.

There are three main modes globally in StrikeFortressBox. The first (standard) is the command one. All players are divided into two teams. Together you need to collect a certain number of frags and this number depends on the settings. Whoever copes with the task faster – wins. The other two modes relate to battle royale. Their only difference is that in the first case you also fight in a team, and in the other mode – alone. 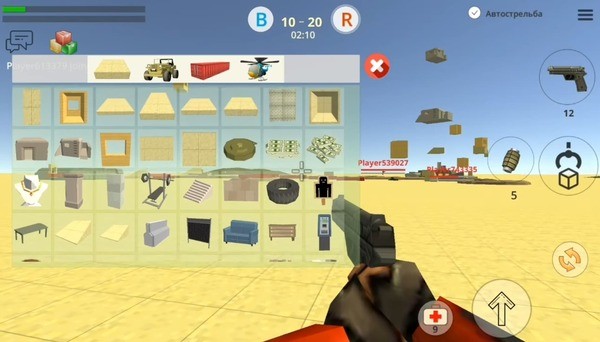 Perhaps the main feature of StrikeFortressBox is the presence of many items in the game that you can build right on the battlefield! During battles, the player earns money and receives resources. Subsequently, he can put some piece of furniture on the location, such as a computer, table or chair. Therefore, you complicate the task for your opponent, because a cabinet or refrigerator, put up in time as a shield, can save your life. There are also more interesting options. For example, build a springboard, then accelerate your car and take off into the air. Players will be able to get, for example, to the enemy on the roof. There are many options, so you only imagination and money limit you.

Many StrikeFortressBox players note that the developers have introduced a very extensive arsenal of weapons into the project. Indeed it is. Here you can see almost any cannon in the world, including heavy grenade launchers and bazookas. There are both laser pistols and sniper rifles. The creators did not forget about the grenades, which are very useful when storming houses. As you can imagine, such an abundance of weapons opens up many opportunities for players to conduct battles. Tactics and strategy can be different, so you just need to make the right choice, adjusting to this or that alignment.

StrikeFortressBox would be boring to play without vehicles. Therefore, you can use cars and motorcycles to catch up with your opponent or, on the contrary, to run away from him. While driving, you can also fire, but you will not see the scope, so you have to shoot at random. There are also helicopters in the application. Use them to rise into the air and shoos enemies with a powerful machine-gun burst. In addition, there is an opportunity to arrange exciting aerial firefights! 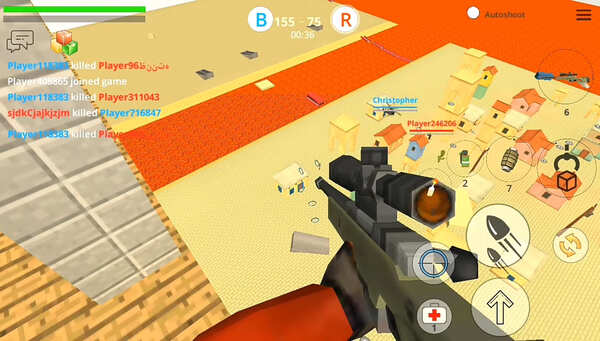 The project in question has a rather mediocre graphics. However, given the large online game and a huge number of different objects, such a picture is the optimal solution. It does not overload the device and allows you to play comfortably on almost any phone. By the way, in general, the view in the game is from the first person, but in transport – from the third person.

We bring to your attention StrikeFortressBox Mod APK for unlimited money. Thanks to this, you can buy the best weapons and vehicles and destroy your enemies without much resistance. In addition, we removed all ads from the application.

The controls in the project are simple, despite the large number of buttons. On the left is joystick to control the character, as well as a list of murders taking place on the server. On the right are buttons for choosing weapons, grenades, reloading, crouching and jumping. At the beginning of team battle, you have several types of weapons at once. You start a duel with nothing only in Battle Royale. Look for first-aid kits on the map to heal on time. 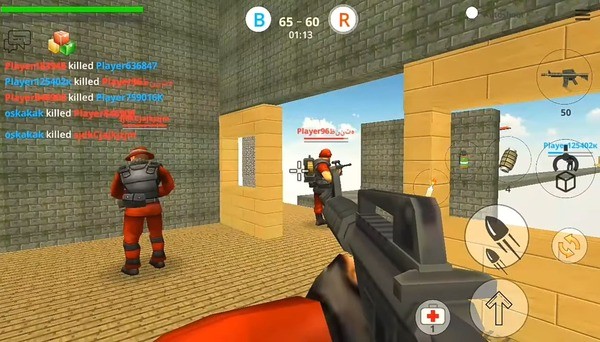 The developers did not add a single-user campaign, because now multi-user products are gaining popularity. The main mode used is team confrontations. You have to fight with other users constantly, trying to get more bonus points.

A large number of crafting items are available to you in the StrikeFortressBox. It is possible to build any items and furniture. Some of them are here more for fun, while others can drastically affect the gameplay. For example, during a period of fierce and prolonged shooting, you can create defensive walls or a semblance of a fortress near you and so sit out the attack in it. However, these walls will not be enough for a long time, as enemies can destroy them.

Despite the fact that games in the style of “Battle Royale” are starting to lose popularity, this project is in high demand. Do not forget about the global sandbox. If you have long wanted to feel something new and unusual, then download StrikeFortressBox.