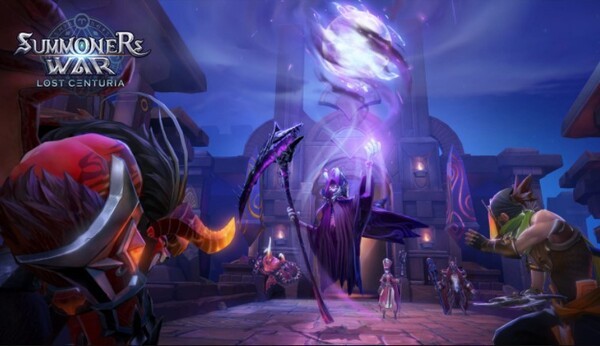 The first part of Com2us series – Summoners War: Sky Arena – has become one of the best mobile games with auto battle and skill pressing. Many people do not like this genre, but if you are an amateur, then you need to choose the best projects! This project is definitely among the best. Developers decided not to rest on their laurels and released a sequel called Summoners War: Lost Centuria. New character leveling system, original monsters and shift in emphasis in battle tactics await you here. In addition, we can recommend Albion Online for all RPG fans.

Read on to discover the many benefits of continuing the legendary series.

A new approach to combat system

The developers have proposed a very interesting concept for Summoners War: Lost Centuria. In most auto battlers, super hits that the player can activate are just a good addition to main attacks. Here everything focuses on them, while basic attacks just represent an element of tactics. You will lose without using skills. Moreover, you will lose if you use skills incorrectly. Therefore, creators solved the main problem of such games: fighting just with skills pressing. Many tactics make the project related to card games like Gwent or Heartstone in a simplified and modified form.

The single player campaign has capture and search modes. During capture, we have to win three battles at each stage. If you win three stars, losing at least half of the allied monsters in the allotted time – then you can get more rewards. Winning three matches of the stage unlocks the boss, which can bring one, two or three stars, affecting the size of bonuses. The defeated boss reappears after a couple of days.

Rest of the modes in Summoners War: Lost Centuria come down to multiplayer. There is a standard battle for rating – everything is clear here. This mode features fight between two players in decks of eight fighters and three spells each. In addition, a free battle opens upon reaching a certain rating. In the challenge, you also fight with live players, but according to certain rules. The game sets limits, and the levels of all characters are equal.

There are several ways to upgrade your fighter in Summoners War: Lost Centuria:

In practice, runes and skill stones affect the strength of heroes much more than simple pumping.

Build coalitions with other players

Any player can create an Alliance as part of Summoners War: Lost Centuria. Alliances are analogous to guilds and allow you to create an internal market for the exchange of items between participants. In addition, clan battles bring more points and experience. Another distinctive feature is the preliminary drawing up of a battle strategy. It doesn’t matter where you and your partner are – there is always the opportunity to contact outside the game and coordinate your actions right during the battle.

Unfortunately, we did not see any significant changes regarding the graphics component. On the other hand, it is great for overall performance. There are no lags or freezes in the game. The sound in Summoners War: Lost Centuria contains pretentious soundtrack and high-quality voice acting of the characters. Overall, it gives the impression of a high quality project worthy of only praise.

Given that the game is a prominent representative of multiplayer genre, there are practically no options for hacking. The developers are actively working to improve the protection of the application and punish players for using cheats and mods. However, we decided to take care of our users and made a version with built-in cache. Now you can install the game with just a few steps. Nothing complicated. Do everything conveniently in order to immerse yourself in the game as soon as possible.

We also want to note that given the fact that there is only a built-in cache among the features of Summoners War: Lost Centuria mod, all other functions work as usual and do not need additional testing.

It all starts with an unmissable training. However, it passes quickly. Here we know that in addition to the indicators of heroes, other elements can also affect outcome of the battle and attack strength. Everything is according to the classics. There is a scheme according to which some elements attack others better and weaker than others. It is quite difficult to control during a match, but it is still fun.

The developers have implemented another important point – concept of counterattack. When an opponent uses an ability, you can use your skill in return. Therefore, your hero can interrupt the opponent’s attack for a while and carry out his own with a high chance of critical damage. The system of counterattacks leads to the fact that no one is in a hurry to simply beat the enemy with skills. After all, it is much more profitable to wait for enemy attack and counterattack instead.

After completing the tutorial, Summoners War: Lost Centuria immediately throws players into ranked battles. This is a rather strange decision. The game has a single-player mode, but to open it you need to play in the ranking in PvP mode. Usually everything happens just the opposite. There is another problem: many players complain about the inability to find an opponent in multiplayer. However, single is not available and you need online to unlock it, which is not available. Truly a brilliant move!

To be fair, we did not have such a problem, although many note it in the reviews. Otherwise, Summoners War: Lost Centuria is familiar. There you can get many heroes from local gacha roulette. The single-player mode is made quite interesting to play it. Well, PvP becomes steadily annoying when donators or just skillful players begin to come across.

The authors of Summoners War: Lost Centuria managed to combine elements of tactics from card games and mechanics of Clash Royale in a familiar auto battler. It is worth noting the single-player mode, which is quite interesting. The only concern is donate options – there are sets that allow you to buy legendary heroes. They are expensive, but donators are not poor either. The rest of the game looks good and fun to play.