Super Mombo Quest is a 16-bit style arcade metroidvania. In the project, you need to jump on enemies, like in Mario, avoid traps and collect crystals. If you do not take damage and quickly destroy the enemy, then you can make “Mombo-Combo”. You will receive additional materials for this. The main character of the application knows how to make a double jump, break stones under them and even cling to walls. The developers promise hundreds of levels, each with its own set of enemies. Some catch up, while others fly and are even able to catch up. The main task is to make the maximum combo. To make it easier, you can buy upgrades from NPCs in cities or even unlock a suit that will give buffs. It is also worth noting the moderate difficulty of the platformer. If you love games that challenge you, then download also DogLife: BitLife Dogs and Dream Piano.

If you want to know more about the game, read our review.

A funny character with many abilities

A villain appeared in the world of the game, imprisoning all the inhabitants in cages. The magician managed to escape from his clutches and decided to find a hero who would be able to save everyone. However, who knew that the hero would be a strange purple slobbering creature? Now, controlling this creature, you need to overcome all dangers and collect all coins, crystals and destroy enemies, including King of Darkness himself. The protagonist in Super Mombo Quest is a strange purple substance that has a huge language and fun graphics.

At the same time, the main character has various abilities that will be very useful to you during gameplay. For example, he can hold onto walls and double jump. If the character lands on the head of the enemy, he will destroy him. This game is also similar to the well-known Supermario.

Another important feature of Super Mombo Quest is the sheer number of locations available to explore. Each of these locations is not very large, as you can run it in just a minute. The secret, however, is that the transition from one to the other is instantaneous. This gives the user the impression that you have a large amount of uninterrupted play. In this case, the surroundings of locations and enemies change.

Watch carefully so as not to hit the spikes or fall into the abyss. If you go too far outside the location, you will definitely lose. You cannot allow it, because then you will have to start over. Many collectibles along the way are worth collecting. You need to collect everything that you see in front of you, because this allows you to get many additional benefits in the further adventure.

Although the Super Mombo Quest is not complicated, you still have to pull your nerves. A difficult but exciting activity awaits you, which will give you many positive emotions. This unusual casual project allows you to relax after a hard day at work. Be extremely careful, because lives are strictly limited, and there are many obstacles in the locations. Push off the walls, double jump, collect crystals and try not to hit the spikes. Do not forget that ominous darkness will still fall on you. If you move too slowly, it will consume you.

Super Mombo Quest features vivid graphics and an unusual speed for the metroidvania genre. Also there are many funny sounds in the application.

We suggest you use the mod for an unlimited number of crystals. It will give you the opportunity to buy any goods. Important! Purchase one life in the store to activate the mod.

Super Mombo Quest is a vibrant and dynamic platformer that combines the genres of arcade and metroidvania. As a bizarre hero with a huge tongue, you will overcome ridiculous situations. Do amazing acrobatic stunts and insane combo moves. The events of this game take place in a huge world, which is divided into hundreds of closely related locations. Explore them and defeat the enemies you meet in any of the levels that you can complete using just one combo. 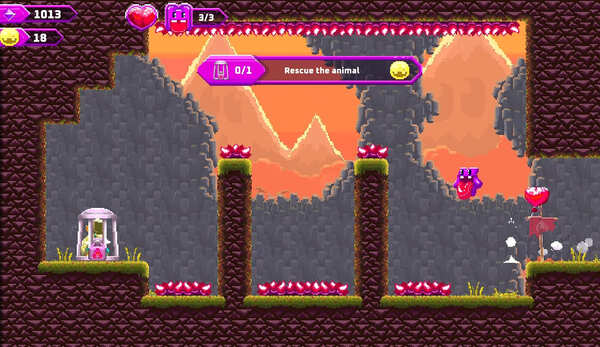 Opponents are also diverse. Some of them will chase your character, others shoot, attack from the air, etc. They all interact in different ways, so the battles are different in their variety. The main character, in turn, can take other forms and each of them has its own unique abilities. If you are bored with battles, go to the settlement to talk to the NPC, buy useful items, pump the hero’s characteristics and perform other possible actions.

Super Mombo Quest is a cool and challenging platformer that will delight both hardcore and casual players.