Survival RPG 3 is the most interesting RPG in the field of mobile gaming from the developer Bew Games Inc. The game has a retro style, which certainly makes it unique in comparison with competitors. You can fight dragons and dinosaurs from different eras, survive, complete tasks and have a lot of fun. By the way, if you love dinosaur games, we recommend that you check out Jurassic World Alive and ARK: Survival Evolved.

The game has already more than 100 thousand downloads, and the average rating on Google Play is 4.7, which is quite high for this genre of games. It is also worth noting that the developer has earned a good name for himself thanks to the previous two parts of the trilogy.

Teleportation and time travel: visit all time intervals in Survival RPG 3, from dinosaurs to the middle Ages and the future. Complete numerous interesting quests from NPCs, explore more than 50 dungeons. Mine and create items of varying degrees of difficulty and usefulness.

Surviving process in Survival RPG 3 is not an easy task. You need to create items, find hidden treasures, solve intricate puzzles, cook your own food, and fight for survival with a huge number of monsters.

Compared to other games, Survival RPG 3 difficulty is one of the hardest in the field of mobile gaming. The game is not casual, unlike many other games of the subgenre. It makes you sweat a little, break your head, but in general has a low barrier to entry, and you don’t need to be a pro-gamer to play it.

The developer has earned the love of dozens or even hundreds of thousands of players with his two previous games. We have the opportunity to make sure that the third installment of the legendary franchise is no worse than previous ones. There are more than a hundred positive reviews on the Internet, which the developers promptly respond. Even in the case of complaints or problems, they always try to satisfy every player.

As we said earlier, Survival RPG 3 has a retro-old style, which can attract both fans of old isometric games of the 90s, as well as a very young audience. The graphics, surprisingly, don’t hurt the eyes, as developers drawn everything beautifully and the objects are intuitive. There are no graphics settings in the game, but in our opinion, this is not even necessary. Graphics doesn’t load the phone’s production processes, but it looks 100%.

The music in Survival RPG 3 is simply gorgeous. The wind and percussion orchestra performs such accompaniments, to which you want to go into battle and feel like the hero of the legendary saga.

Sometimes we all want to relax and play without really straining and taking into account finances, savings and all that other stuff that only loads the brain with unnecessary information. An excellent solution – a mod for unlimited money! It helps to facilitate the game, which is very correct in the era of casual mobile gaming. Modified version doesn’t make the game easier as it opens up endless spaces for exploring the big world created by the developers.

We tested Survival RPG 3 regarding the performance of unlimited money feature. Based on the results of the check, we can one hundred percent say that the mod works and it is safe for your device. Installing the game doesn’t require additional actions – enjoy and play with endless resources.

To begin with, you need to create a character using a simple editor. Then it is necessary to study the controls. Here you can choose from two options, but in general, the controls are simple and convenient. Then a well-executed intro begins, in which we are teleported back and forth in time to know that a villain changed the course of time. Moreover, as in the best traditions of games, only we can save the world and return everything as it was. This is where our exciting adventures in this wonderful world begin. 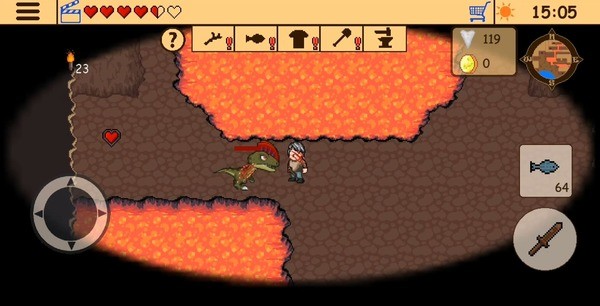 The gameplay of Survival RPG 3: Lost in time adventure 2d is simple. Just search for resources, kill mobs, craft, try not to die. However, it has a certain tightening power. It becomes more and more interesting to upgrade and kill monsters with every step. For some gamers it is even sad to end the game, because developing and surviving in this game is a truly interesting and demanding test.

In conclusion, we would like to note that this is a very unusual game for its platform. Its competitors are unlikely to be able to compete with its unique features. You want to return to it from time to time, go through, find all secrets and loopholes and kill all the mobs. In addition, modified version can bring better and more cheerful gameplay. Download this game and dive into the mysterious world of time travel!

How to install Survival RPG 3 Mod?

Delete the original version of Survival RPG 3: Lost in time adventure 2d before installing our modified version to prevent errors during installation process.