Swordigo is a kind of phenomenon game. There are no mind-blowing graphics or dashing plot. Components such as sound are rather commonplace and do not stand out in any way. However, the gameplay decides everything! Perfect calibration of levels, control points that replace the save and many other features creators implemented cleverly. You will get angry when you get stuck in certain moments, but most likely you will not quit playing. Difficulty balances carefully to keep the player interested. There are elements of a real RPG here: weapons, armor, character leveling, monsters and bosses. Before you is a full-fledged arcade game, where jumping from platform to platform features the search for various bonuses and does not get tired at all. For platformer lovers, we can also offer Feral Hearts and SpongeBob’s Idle Adventures.

It has been a long time since Swordigo released in 2012, but players still download the game without skimping on high ratings. Read on to find out about the reasons for this colossal rush.

Swordigo begins in the village of Carinwood, where our protagonist lives in a green jacket and blue hat. Unfortunately, the developers of Touch Foo did not come up with a name for it, so we will denote it by a common noun. Our hero wakes up from a nightmare in which he fights with unknown dark forces. Later it turns out that this dream was prophetic. 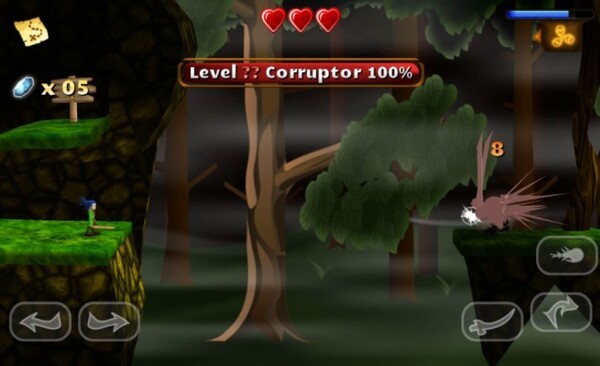 In reality, the main character goes in search of a magic sword. On the way to the goal, trample many kilometers of the earth, defeat hundreds of flying and crawling enemies, go through many tests – from trivial to puzzling. In some moments, the game even resembles a quest: find something to get it for using further. The symbiosis does not end there.

A huge number of mini-locations are available in Swordigo world, and you can move between them through special portals. By the way, these very portals act as checkpoints from which players resume the game in the event of Game Over. Almost every mini-location has treasure caches. Most of the chests are full of only with bonus crystals. Some vaults contain items and artifacts that are required for the story. It remains unclear why the hero can fight the boss several times. Apparently, this opportunity is for those who claim not a record number of points or want to quickly gain experience.

Swordigo is full of various RPG elements. Eliminating malicious individuals and gaining experience, the player will be able to choose skills to improve. Get extra lives, sword power and magic efficiency. There is no need to talk about any education of a magician or a pronounced fighter, but the role-playing component certainly adds uniqueness and entourage to the game. At first, we recommend pumping your witchcraft abilities, since using a blade to fight winged ill-wishers and bosses is much more difficult. The warrior’s arsenal is usual, but it is possible to get additional weapons in the store near the house. A healer who restores health lives nearby. 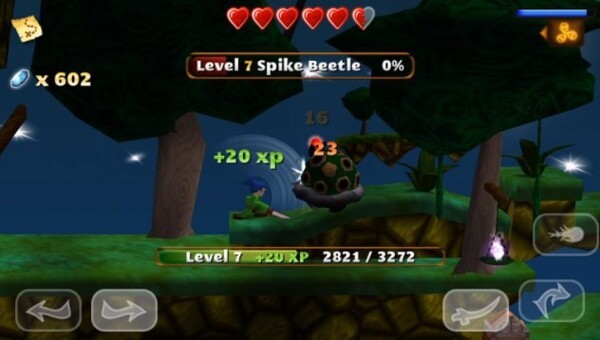 The default scheme of controls in Swordigo is as follows. There are two arrow buttons on the bottom left responsible for moving left/right. Double tap on any of the arrows makes your character move faster. There are three buttons on the bottom right: jump, sword strike and magic. Use the jump button for short, long and double jump. Use the hit button not only to attack, but also to interact with objects (sword icon changes to a hand icon). Deal with enemies faster and open blocked areas with the help of magic.

Leveling up the character in Swordigo takes place thanks to a successful attack in a battle with enemies and the collection of precious stones. In total, there are three skills available to upgrade – health, weapons and magic. The last two also depend on the corresponding items that you will receive/buy during the game. By the way, there is no In-App Purchase here, which is more likely to please than vice versa. Go through the game on your own, but not with cash in our wallet.

Encounter a variety of enemies on your journey. The further you advance, the more difficult it will be to deal with them. Some of them, for example, ordinary spiders and bats easy to kill, but their pumped versions take more time. Bosses will also meet and you will have to tinker with them. In general, the whole game does not call a sense of difficulty. Only more or less serious tests await you at the end.

The experience of the graphics of Swordigo for the players can be very different. On the one hand, all the elements are in 3D, which is more than enough for a platforming game. On the other hand, despite the good 3D rendering, the game elements are not very beautiful and realistic. Everything that is on the screen is very colorful. However, if you look closely and just look at the elements of the environment, it becomes noticeable that the artists did not take their work very responsibly. It is possible that the not very natural environment is the idea of ​​the game developers. Thanks to 3D, the game looks decent, and excessive concern for realism could simply deprive millions of owners of weak devices the opportunity to play a good game. 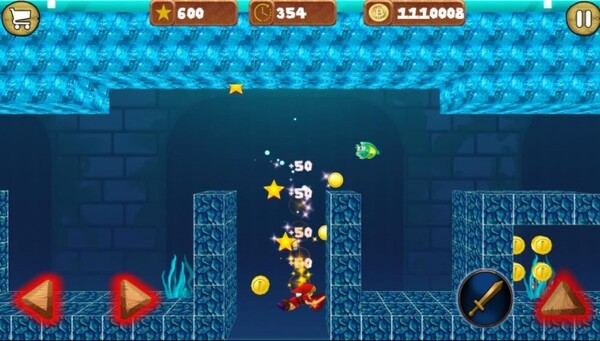 Any improvements, be it weapons or magic, require quite an impressive amount of money. As we said above, there is no donation in the game, so you have to earn everything yourself. That is why we suggest you download Swordigo Mod APK. It allows you to access all the improvements and features from the very first launch. Moreover, you can improve everything without hindrance thanks to the unlimited money option.

Swordigo is unlikely to impress you with its plot and gameplay. In principle, we have already gone through all this hundreds of times. However, this game is still addictive and you want to go through it completely without stopping. This suggests that the game was a success, because it is interesting and pleasant to spend time in it. Save our defenseless friends, fight with evil spirits and rid this little world of her presence!